In June this year, after the killing of George Floyd by a police officer in the American city of Minneapolis, two new artworks appeared in Forest Hill. The first, on Waldram Park Road; simply stated ‘Black Lives Matter’ ― a recognition of the difficulty Black people continue to have, even today, in being seen and treated equally.

The second artwork, created by Nathan Bowen, can be seen on Perry Vale, close to the underpass. It is a powerful image in its own right, but it is also a representation of the 1968 Memphis, Tennessee sanitation strike.

The Memphis sanitation strike was provoked by the death of two sanitation workers who were crushed to death in a garbage truck that malfunctioned while they sheltered from the rain. This led to strikes and marches, with the protestors taking up the placards shown in the photo, in a peaceful protest against poor working conditions and a host of other grievances.

Martin Luther King Jr was a strong supporter of the cause of the sanitation workers and led some of the marches in Memphis. It was on 3rd April 1968, in Memphis, that King gave his last speech ― “I've Been to the Mountaintop” ― and on the following day he was assassinated on the balcony of his motel room. 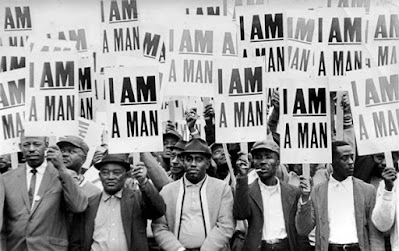 Bowen’s artwork reminds us of the injustice and inequality for Black, Asian and Minority Ethnic people, not only in 1968, but also today. "For at the heart of racism is the idea that a man is not a man, that a person is not a person. You are human beings. You are men. You deserve dignity." ― Rev James Lawson 1968.

Splendid article authored by Michael A (noted from his post on SE23.life).

Well observed, inciteful and reflective of the recognition of the international nature of the art.

Most importantly it resonates with the views and ideals of the majority of our community.