Havelock Walk may be known for its community of artists, but 100 years ago, at the other end of Forest Hill, a small boy grew up to become the 20th century’s most notorious and gifted art forger, responsible for 2,000 fake painting by over 100 artists, many of which still hang undetected in galleries across the world. 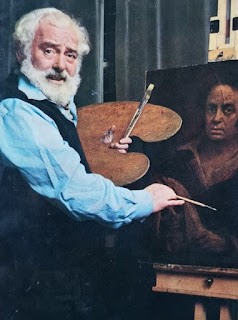 Tom Keating claimed that his “Sexton Blakes” were his response to the corruption and vested interests he saw in art dealers and galleries, profiting whilst impoverished artists suffered and starved. In a practice meant to undermine these experts and give him a possible defence against charges of fraud, each painting contained a deliberate ‘time-bomb’ which gave a clue to its deception. He would write comments such as “You’ve been had!” on the blank canvas (revealed only under X-ray), deliberately use a modern pigment, or even add a layer of glycerine under the paint so that the painting would be destroyed when cleaned.

The early chapters of Keating’s fascinating autobiography, The Fake’s Progress, paint a detailed and affectionate portrait of the neighbourhood around Herschell Road, where he was born in 1917 in one of the 36 flats in a terrace of three-storey houses opposite St Saviour’s Church. It was then a poor working-class area of overcrowded and unsanitary dwellings, but where everyone looked out for everyone else. It was a nice enough place, writes Keating, better at least than the slums of the East End.

Keating’s father worked as a house-painter for the same building firm for 37 years, until the gas in his lungs from the Great War left him unable to work, and he was sent home with an hour’s pay in his pocket. The family were left to rely on the wages earned by Tom’s elder siblings for their survival.

Tom’s education started at Dalmain Road school, where he first found his talent for painting, although he soon ran away to Eltham, and spent three years living there with his grandparents. Returning to Dalmain Road, he passed the entrance exam for St Dunstan’s College in Catford. However, with his family unable to afford the fees, he left school for various jobs, selling parts for early wirelesses, and working as a barber’s assistant.

Called up to the Royal Navy for the Second World War, Keating married whilst at home on leave after his ship was torpedoed. After he was invalided out, the couple took a room in Sunderland Road. Ellen worked in munitions and Tom as a door-to-door salesman, selling Lazy Lady’s furniture polish.

Then, in 1952, whilst studying at Goldsmith’s College, Keating met Albert Fripp, an art dealer on Dartmouth Road. Fripp’s business involved buying copies of Dutch flower paintings made by ‘little old ladies’ in Bromley, which he would age in an oven and sign before selling to West End galleries as period originals. When he realised that Tom — now living in Westbourne Drive — had a particular talent for restoring and copying paintings, he took him on, and Keating had found his vocation.

Tom scoured antique shops around Forest Hill, Sydenham and Dulwich for supplies of cheap old canvases and frames which would be the basis of his forgeries. Using descriptions found in old sale catalogues, and with meticulous background research, he would recreate ‘lost’ paintings by Dutch, English and Italian masters, French impressionists, and even German expressionists, which would then find their way into the hands of dealers, and were often authenticated using the very catalogues Keating had used to invent them in the first place.

In 1976, and by now living in rural Suffolk, he was charged with fraud when a collection of Samuel Palmer paintings in a London gallery were traced back to him, but the case was dropped when Keating fell dangerously ill. He recovered to become a minor celebrity, presenting a Channel 4 television series on the techniques of the Old Masters (Tom Keating on Painters), before he died in 1984 at the age of 66.

Since his death, the appreciation of Keating as an artist has risen, and his once worthless fakes now reach considerable prices. In a neat reversal of fortune, this has in turn fed a thriving market in counterfeit Keatings. Tom would probably have approved.

I met Tom once when I served a writ on him