Readers may know that the Green is owned by a local charitable trust formed in 1998 with the specific purposes of purchasing the land from the former tennis club trustees and protecting and enhancing the space for the benefit of the local community. The Trust has been moribund for several years but following welcome intervention by Lewisham Council a new set of trustees is about to be appointed from local community groups in the area and active Green supporters. The appointments will take place at the Trust’s annual general meeting and anyone living in the area is invited and very welcome to attend.

The Friends of Albion Millennium Green group will continue to care for the Green and its upkeep, and will continue to organize and host the many events and activities which have become established as regular features.

Activities this year have included performances by the Bedlam Bunch for the Sydenham Arts Festival, several children’s birthday parties organized by local parents and visits by groups of environmentalists and botanists.

We took part in the Capital Clean-Up scheme with workday sessions clearing rubbish, chain link fencing and brambles. The Green is looking better than ever as a result, but also because local residents have devoted a great time of time and effort in mowing the grass and clearing the paths of weeds. Litter clearing helps too, and this year we have had less of a problem with dog mess as more people are clearing up after their pets.

Our fruit trees are thriving and although we had a large crop of blackberries they were rather small this year. Insects and birdlife abound as well as plants and vegetation. Anyone interested in bird watching would be most welcome to update the amazing list given to us in February 2013: www.amgfriends.org.uk

The Green is accessible from Albion Villas Road and the railway path which runs between Forest Hill and the iron bridge over the railway leading to Sydenham.

Halloween in Forest Hill - Be Afraid! 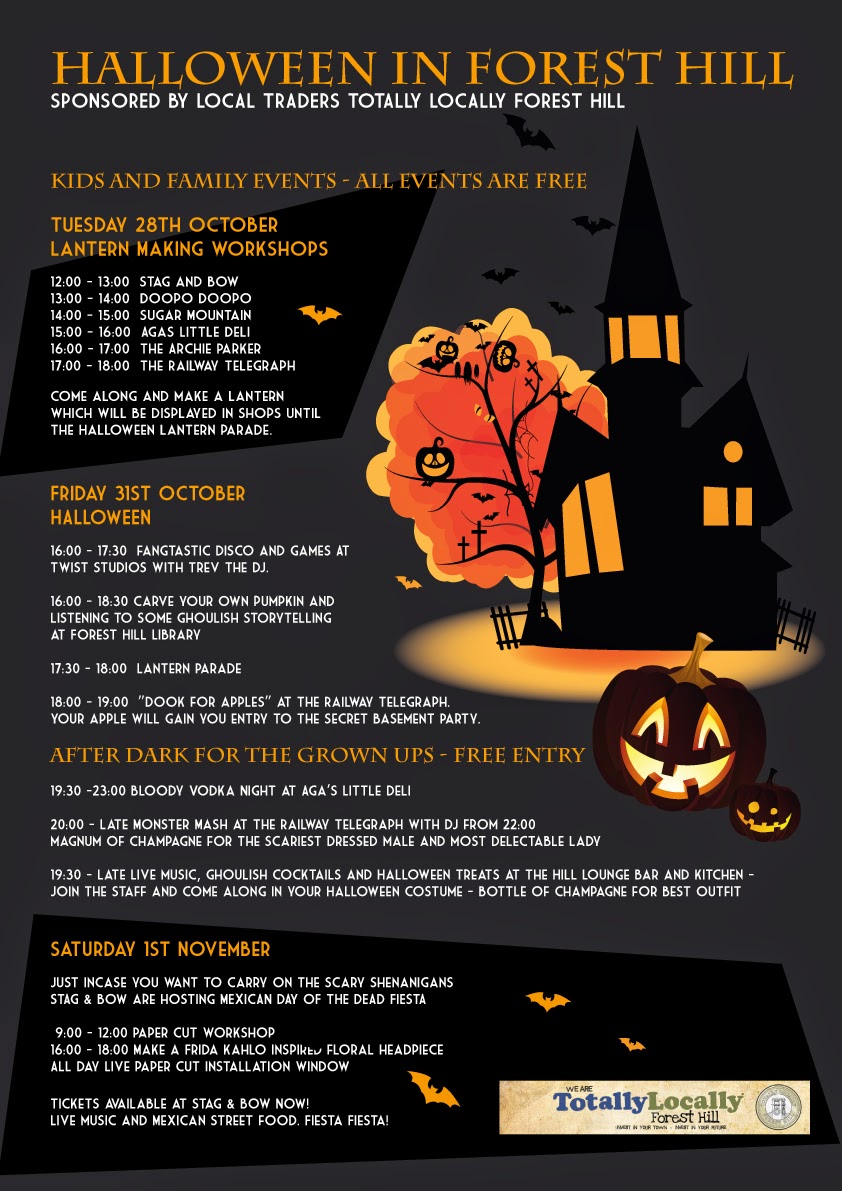 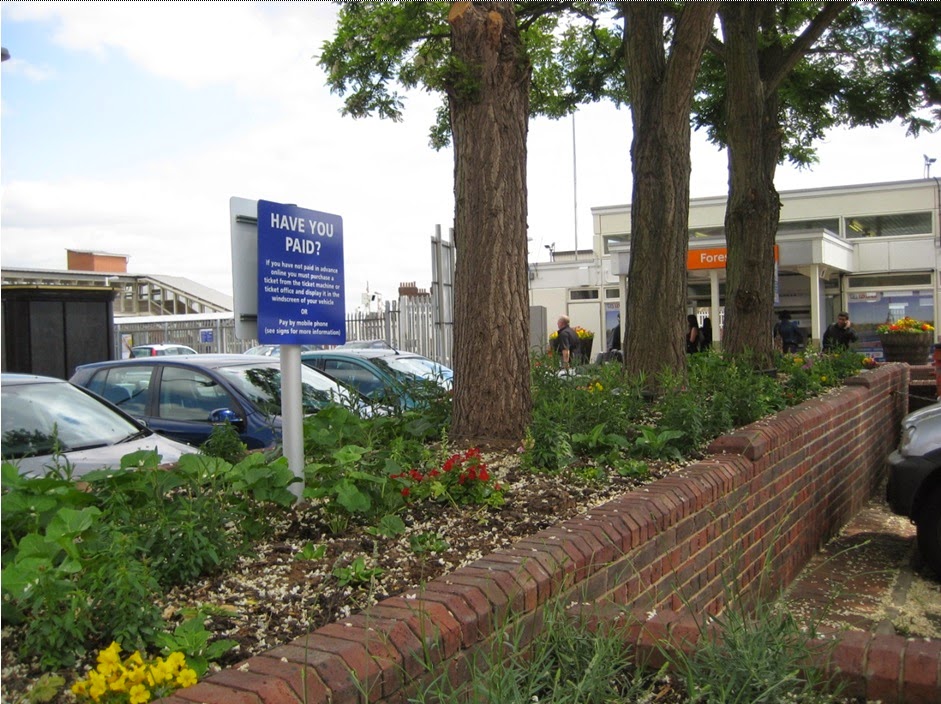 On Sunday 26th October we will be meeting in Forest Hill station forecourt at 2.30pm.  We will be cutting back the lavender and tidying up the planted area under the trees in the front of the station as well as the planters on the platforms, on the street corner near Barclays Bank and, depending on how many people turn out to help, weeding and seeding the planters under the trees near the Dartmouth Road Job Centre.

Preferable to bring gardening or other suitable gloves, secateurs or scissors and a spare plastic carrier for collecting weeds and clippings.  A trowel is also useful.

Note: As we will be working close to the main road and parking cars, this is not a suitable event for small children.
at Tuesday, October 14, 2014 No comments:

For some of the most up to date information from the Forest Hill Society, join more than 1,000 people by 'liking' us on Facebook.

This Halloween the independent businesses of Forest Hill have teamed up with the Library to bring you a ghoulishly brilliant Pumpkin Making and Storytelling. Its happening on Friday 31st of October (of course!), from 4pm till 6.30 pm, and its absolutely free.
at Thursday, October 09, 2014 No comments:

A planning application has been submitted to convert the Red House on Gaynesford Road into six flats. You can read the details of the application here, or search for DC/14/88509 at http://planning.lewisham.gov.uk/online-applications/


Below is the text of the response from the Forest Hill Society:


I would like to object to the above application on behalf of the Forest Hill Society.

This application is to make substantial changes to the main house built by Ted Christmas which is an important Heritage Asset in the local area.  We appreciate that this building needs an appropriate alternative use but we would wish that this is done in a way that is sensitive to the character and appearance of the existing building.

We understand that proposals are to be brought forward by the Council for a Conservation Area covering Gaynesford Road and the Christmas houses.  With this in mind it would be premature to give permission for changes to this building until this is confirmed OR the applicant should agree to treating the application as if it were in a Conservation Area already and submit an appropriate heritage assessment.

The changes will alter the property in a way that will harm its heritage significance.

In particular the replacement windows (it is not set out why these are required or whether they will be timber or another material), loss of key interior features and other elements of the proposals are unacceptable.

The internal circulation within the proposals does not respond to the character of the house with some flats not having access from the main entrance and needing to gain access by walking past the bedroom windows of other ground floor flats quite some way around the building.  This has an impact in terms of the rear garden not being private and for the use of residents and also being accessible by visitors.

The sizes of some of the units are below those set out in the London Plan Housing SPG.