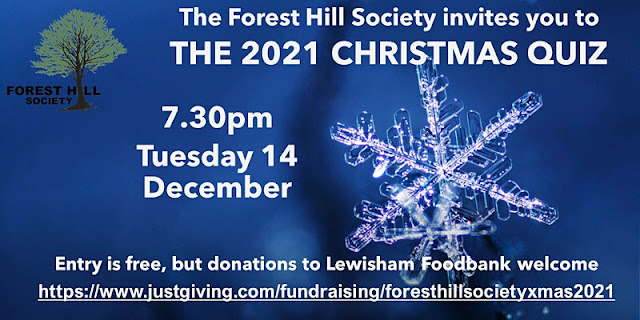 The Forest Hill Society invite you to the 2021 Christmas Quiz

To register for the quiz go to Eventbrite.

Entry is free but donations to Lewisham Foodbank are encouraged:

Tree Lighting and Carols in Forest Hill and Kirkdale

The Forest Hill Christmas Tree will be switched on Saturday 4th December shortly after 3:45pm with carol singing.

The Kirkdale Christmas tree will be switched on shortly after at around 4:30pm with more carols. 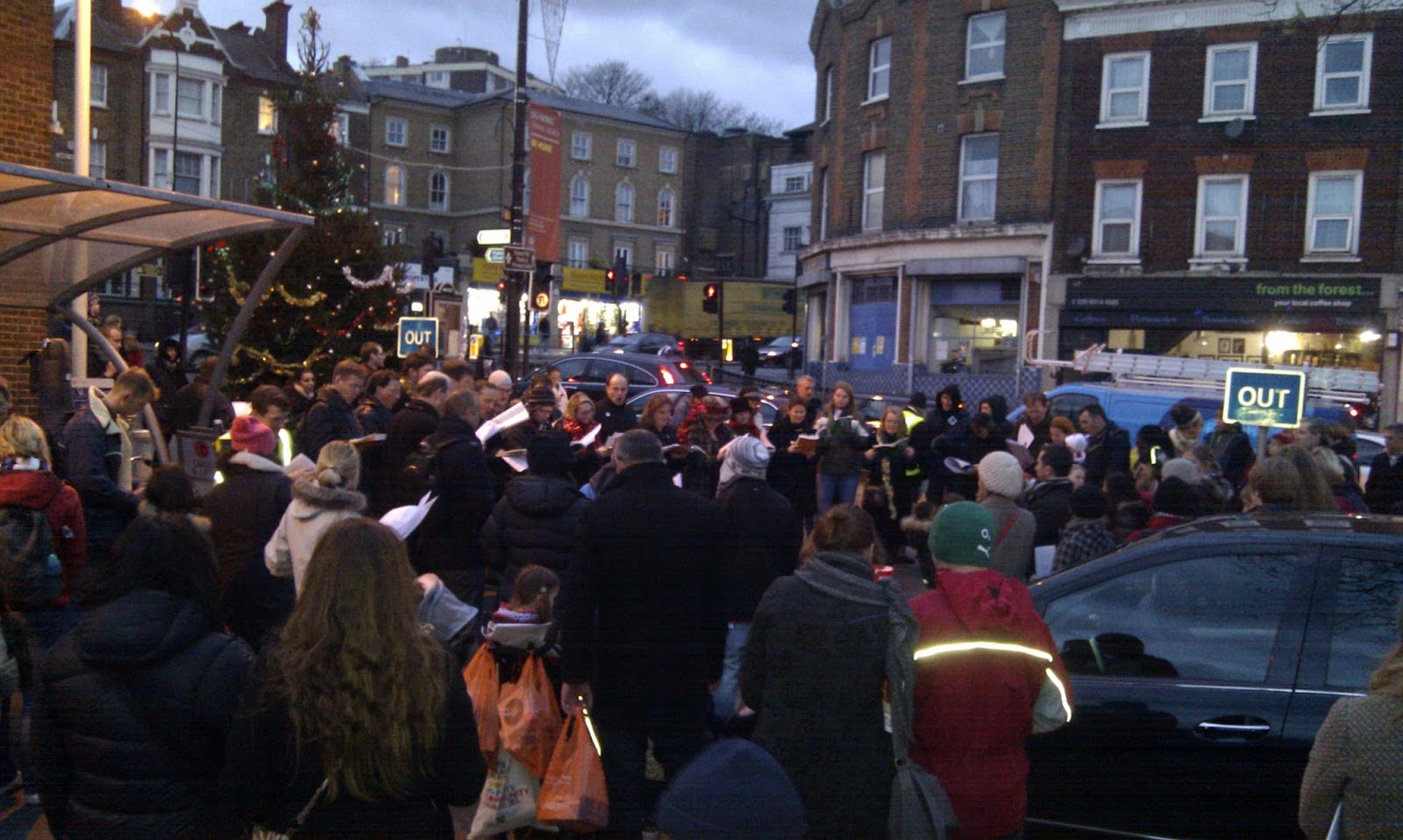 We are thrilled the Forest Hill tree will be decorated again this year by local designer Lee Jackson of Jackson Morgenstern Design.  That evening Lee will also feature on the new Channel 5 special: Incredible Christmas Trees and How to Decorate Them at 7:40pm.  Broadcast is currently scheduled for 7:40pm on December 4th but please check closer to the date for the exact time.

Plan to run service only during rush hours and at weekends

During lockdown, Southern services on the “loop line” between London Bridge and Victoria were suspended, leaving only two Southern trains per hour running between London Bridge and East Croydon. There was an expectation that the service would return to normal this autumn. But when the new Southern timetable was released two months ago, the loop line service began operating an intermittent service at weekends only.

A meeting with Southern to discuss the situation was convened last week with our local MP Ellie Reeves and the Forest Hill and Sydenham Societies. Present at the meeting from Southern were Olivia Barlow - Stakeholder Manager; Chris Fowler- Customer Services Director and Paul Codd - Stakeholder Manager for timetables.

The good news is that Southern intend to reintroduce services between London Bridge and Victoria on 4th January. However, this will only be a partial service, running throughout the day on Saturday and Sunday but only during rush hours on weekdays (7.30-9.30am and 4.30-6.30pm).

Train occupancy levels (which Southern presented at the meeting) show that passenger numbers remain stubbornly under 60% of pre-Covid levels. Southern also reported that they were suffering from significant staff shortages due to Covid-affected drivers having to isolate, and this is the main issue for reduced service, rather than budgetary constraints or train occupancy rates.

In the meantime, Southern’s advice is to travel to Norwood Junction and change there for trains to Victoria.

At the recent Forest Hill Society AGM the Mayor, Damien Egan, announced that the Council would henceforth engage much more proactively with Airports on the issues of flight paths and low aircraft over Lewisham. This is excellent news, and is something we have been campaigning towards for several years.

Where individual aircraft are flying to over Forest Hill isn’t always immediately apparent - London City and Heathrow Airports both overfly us at different times and in different wind conditions. It has been quiet during the pandemic but this summer noise returned and was all the more noticeable. The worst is in light east wind conditions when arrivals from both airports are overhead.

The Government seems intent on enabling airport and aviation expansion, and is putting its ‘Jet Zero’ policy forward to justify how climate change and aviation expansion can reasonably co-exist. A noise, emissions and climate emergency debate rages - a recent comment on that, from climate action charity Possible, said:-

‘Although the government’s recognition of the need to tackle aviation emissions is welcome, its scenarios to achieve net zero aviation by 2050 are fatally flawed. It relies on undeveloped, extremely expensive or unworkable technologies....’

At the same time Government has just abolished the Independent Commission on Civil Aviation Noise, which met with the Forest Hill Society several times in their brief 3 year existence as we worked to get our local double overflight problems onto the aviation policy agenda. And Heathrow night flights are to continue, exactly as they are, for at least three more years, giving us those late night and very early morning wakeups in SE London. John Doherty and I have been working with all this for some time now while representing the Forest Hill Society; this seems like a setback to us, and feels like very little progress at all.

But maybe these national issues are not for our local Society anyway. What can we actually influence? First, we’ve invested time meeting and putting our information and arguments to GLA Assembly Members, our MP’s and Councillors. Recently we have been delighted to see both Ellie Reeves MP and Janet Daby (MP Lewisham East who we met in a June Zoom call) ask questions in Parliament about flight paths, citing the low flying and unreasonable aviation noise experiences of Lewisham people.

For a few years now, I have been attending the London City Airport Consultative Committee, to keep Forest Hill and Lewisham on their agenda. I am pleased that Lewisham Cabinet Member Sophie McGeevor has also attended and has made it her business to strongly represent Lewisham’s interests there. Meanwhile I have also been attending the Heathrow Community Noise Forum, always trying to make sure that our very real issues with their flight paths over SE London are not drowned out by equally compelling issues from those living nearer the airport.

The next big issues that we can have any influence on in Lewisham are going to be the redesign of both London City and Heathrow flight paths. We need to make sure they coordinate their work, when there is little evidence of that in the past. Otherwise, we may end up with something similar to today or worse. I was invited to a workshop on flight path design principles at Heathrow in September. City Airport is expected to announce their development plans in December. We will be arguing for an end to double overflight from the two airports, and an end to the single low level concentrated arrivals path from London City, with introduction of alternative and rotating routes, so the same people don’t get the noise all the time. 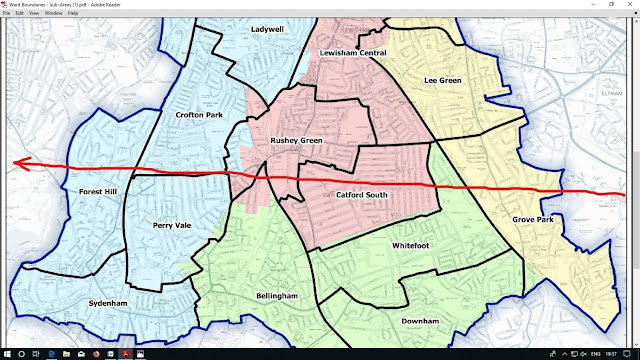 These are big issues not just for Forest Hill but for large parts of Lewisham and SE London. That is why we asked Lewisham to make preparations on behalf of all of us as these important flight path details are hammered out and consulted upon. Following recommendations from the Forest Hill Society the Mayor has confirmed that Lewisham Council will take up a place at the London City Airport Consultative Committee and the Heathrow Community Noise Forum. This will give officers regular up to date information on what is happening. We understand that the Council also plans to work closely with other SE London Councils, the No Third Runway Coalition and the Aviation Environment Federation, both non political bodies that will provide Councillors and Officers with high quality information to inform the Borough’s policy and timely responses to consultations and help them to influence flight path planning.

These are not big or costly things to do in themselves, but will help Lewisham to step up. We are delighted that Lewisham has responded by deciding to embed this work into the environmental health team, so that they can be best prepared at all times to contribute wisely on aviation issues where they affect Lewisham residents.