In the latter part of the 19th century it was recognised that pollution, overcrowding and unsanitary living conditions in many cities contributed to the development and spread of infectious and debilitating diseases. Children were particularly affected, primarily with tuberculosis, but also with asthma and anaemia. These children were often described as 'delicate', meaning that they were malnourished and underweight.

German studies in the 1890s showed that the health of children with tuberculosis could be improved with good nutrition, fresh air, exercise and rest. Purpose-built schools implemented these interventions alongside education. The first of these ‘forest schools’ or ‘open air schools’ opened in Charlottenburg, near Berlin, in 1904. As a result of the success of this school the idea was copied in many European countries and further afield. A delegation from London County Council visited Charlottenburg, and were so impressed that it was decided to repeat the experiment in London. The first Open Air School in London opened in Bostall Wood, near Abbey Wood in 1907. The following year three more were opened including Birley House School in Forest Hill.

Birley House was a mansion with a large garden located at 108 London Road next to the newly built Horniman Museum. Being high on a hill it was above urban pollution and benefitted from a steady breeze. The school was open all year round but was not residential. Children were brought up daily by tram from the slums on the south bank of the River Thames. The school buildings initially consisted of prefabricated wooden sheds; later, some permanent pavilion-style classrooms with open sides were added. Staff consisted of a trained nurse, a head teacher, three assistant teachers and some domestic help.

By 1913 the school accommodated 90 children from 6 to 14 years of age. At this time, children left school at 14 years old and started work. The children arrived at 9am and were given a breakfast of porridge or bread and milk. During mid-morning they had a snack of bread and butter or dripping or hot soup in the winter. The main meal consisted of meat or fish with two vegetables followed by a pudding or stewed fruit. Before they went home at 6pm they were given tea with bread, butter, jam and a slice of cake. The staff ate with the children but at their own table. The children sat at tables of ten and elected a monitor who supervised table manners and made sure that children ate their food. 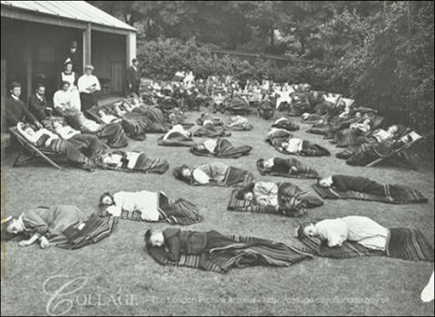 After the main meal the children had two hours of rest every day. They laid in reclined deck chairs or on the grass and were given blankets. There were weekly checks of underwear and heads for lice followed by a hot bath. The children regularly had their height, weight and haemoglobin measured and recorded. Education focused on developing useful citizens through cooperation, division of labour and self-reliance. Activities for boys and girls included gardening, acting, dancing, cooking, domestic skills and infant care. Other subjects studied included mathematics, geography, music and nature study. The school was successful in improving the health of the children and gave them skills to succeed at work and in their personal lives. 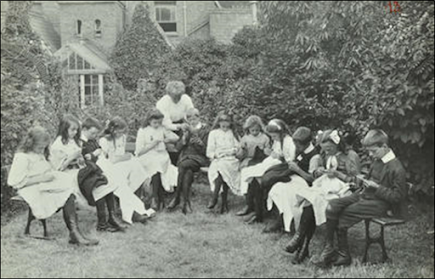 After the Second World War the health of children improved greatly as a result of the use of antibiotics to treat tuberculosis, improved standards of living and the introduction of the National Health Service. Open Air Schools were no longer required. Many closed and some were repurposed as Special Schools for physically handicapped children.

Birley House Open Air School moved and was incorporated into Brent Knoll Open Air School in Sydenham in 1927. Birley House was demolished in the 1950s and the land used to extend Horniman Gardens. No trace of this pioneering school in Forest Hill is visible today.