200th Anniversary of the Enclosure of Sydenham Common

Between 1810 and 1819, we tragically lost our very own ‘jewel’, a 500-acre common, in a lengthy process of enclosure. This would take away access to our natural landscape, and a way of life, permanently, and set the course for the eventual creation of the suburbia we recognise today. To contemplate this loss requires a leap of the imagination, as it seems there are so few clues left until you start to look for them. When you next pass The Greyhound pub in Sydenham, be sure to read the interpretation plaque that accompanies the large mural facing Sainsbury’s. However, if you stand in Sydenham Wells Park, you can experience the gentle undulating hills which once characterised the common, a space about 25 times larger than the park. Just imagine the park before its neat horticulture, where animals grazed and some ramshackle buildings provided shelter; you might capture something about Sydenham Common, which was previously called Westwood Common. 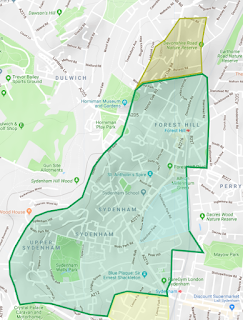 We do know that in 1813, when Washington Irving visited the poet Thomas Campbell (whose house on Peak Hill overlooked the Common and the reservoir which topped up the Croydon Canal), he was surprised and delighted that it reminded him so much of the countryside in his America. Campbell’s house was a hotspot for such visitors and one of the more accessible centres of a complex social network in Sydenham. His distant cousin was society hostess Lady Charlotte Campbell, who was the daughter of the 5th Duke of Argyll and
lady-in-waiting to Princess Caroline, and keeper of an anonymously published series of diaries, among which records the first known written encounter with William Blake. She lived nearby in the mansion house called Westwood House, for whose earlier owner a fine grove of Elms were planted in an avenue, leading toward the centre of the mansion, that today we know as Jews Walk.

In what seems like an improbable twist, Eleanor Marx, who would live in Jews Walk much later, is also descended from the House of Argyll — which we know because Karl Marx was questioned by police when he pawned his wife’s silver. The crest of the house of Argyll was identified on the silverware and Jenny Marx had to explain that her great-grandmother was a Campbell.

These little vignettes transport us back to a completely different age, yet something recognisable to visitors of Hampstead today. The thought that we, in south east London, had lost the equivalent of something like two-thirds the size of Hampstead Heath is lamentable. But the works, letters and diaries of contemporaries mean that we can piece together a substantial picture of life in Sydenham and Forest Hill at that time. 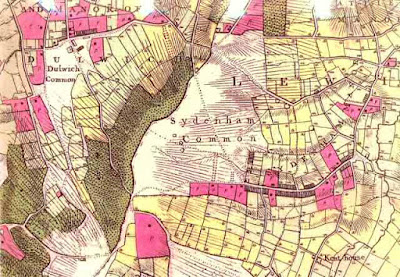 We can verify many of the described locations by cross-referencing them, and plotting them by using online maps spanning the last two centuries. We are living with the paradox that, if we piece together the evidence, we would come to know more about life around Sydenham Common than would have been known to its most observant and well-connected residents. The capability of Wikipedia to provide this type of evidence has been a sea change in the fortunes of local historians. We can be grateful to the voluntary contributors to Wikipedia and reflect on the fact that it is founded on a model called ‘Creative Commons’, which itself draws from the original traditions of commoning, showing the reinvention of this deep-rooted need.

In July 2019 London will be designated as a National Park City, exactly 200 years after the final enclosure of Sydenham Common. The Forest Hill Society had the pleasure of hearing campaigner Daniel Raven-Ellison talk to us at our last AGM, describing the genesis and development of this astonishing idea. I think Forest Hill and Sydenham should seize this opportunity to celebrate the launch of London National Park City and commemorate the Common by promoting the understanding of, and access to, nature. One month beforehand in June, the London Festival of Architecture will explore its theme of ‘Boundaries’. I wonder if we can somehow work towards physically marking the historic boundary of the Common, perhaps (eventually) permanently and, in doing so, use social media to welcome in the National Park City.

One special space that sits within the former Common at the very boundary of SE23 and SE26 is Albion Millennium Green, a gift from the nation. 'Albion' was one of 245 green spaces across England that was created under the Countryside Agency’s Millennium Greens scheme with funding from the Heritage Lottery Fund to commemorate the year 2000. We have been working with volunteers to secure the future of the Green and its health, and we know that to continue this we must appeal to our collective sensibilities.

The Green (like the Common once before it) is something we all need to look after, for the benefit of everyone. Being located so close to Forest Hill Library and Pools, it feels like it is our own village green even though it seems so much like a secret garden. It is even used for 'Forest School' activities which combine outdoor learning with appreciating nature. The Friends of Albion Millennium Green would like to thank all our visitors, volunteers and supporters, for keeping alive such a vision — not just as a 'Sleepy Hollow' but as our very own part of "England's Green and Pleasant Land".