When I came to live in Forest Hill in the early 1980s there were 14 pubs in the SE23 post code. I know this as I have a book from that time published by the Campaign For Real Ale (CAMRA) entitled ‘Real Ale in South London’, which lists and briefly describes these pubs. Despite the nationwide demise of many pubs in recent years, Forest Hill has been less hard-hit than many other areas. There are now 13 pubs in SE23 — we have lost three and gained two pubs since the early ’80s.

The first of the three pubs which closed was Tyrols at 149 Stanstead Road, on the corner of Wastdale Road. This big pub was previously known as the Swiss Cottage and in the 1980s was a disco pub at weekends, which is when I occasionally visited it. The pub was demolished in 1990 and an apartment block now stands in its place.

The next to close was the Moore Park Hotel on Wood Vale, at the far western edge of SE23. This is the only pub of the 14 in which I never had a drink. It was closed in the early 2000s, and is also now a block of flats. The most recent one to close, in about 2010, was the Forest Hill Hotel, located in the quiet part of Stanstead Road on the way to Travis Perkins and Shannons. It is now a rather attractive block of flats.

The two pubs which we have gained are: The Capitol on London Road, which opened in April 2001 and, as many people know, was formerly a cinema, then a bingo hall; and the Sylvan Post on Dartmouth Road, which opened a couple of years ago in the former 1960s post office and retains many features of the original building. We could even say SE23 has 14 pubs if one includes the Perry Vale (‘Kitchen and Bar’), which opened in June 2015. This excellent establishment is listed in CAMRA’s What Pub website but I do not classify it as a pub — although there is perhaps a blurring of the lines now between pubs, bistros and bars. Similarly, in Honor Oak, the Two Spoons and Donde are bars as well as restaurants. So perhaps we even have 16 pubs/bars in SE23.

Of the other eleven pubs, I would say that the theme has been improvement over the years. Several have been extensively refurbished and some much improved since the 1980s. In this latter category, I would include:

Other pubs which were good in the 1980s and are still fine now are: the Prince of Wales on Perry Rise, which was my other main local back then and was renovated in 2013; The Signal on Devonshire Road, opposite Forest Hill station; The Bird in Hand on Dartmouth Road; The Hill, further up Dartmouth Road; and the Railway Telegraph on the corner of Sunderland and Stanstead Roads.

The remaining two pubs are ‘outlying’ ones, about which I have least knowledge: the General Napier on Bovill Road, Honor Oak Park and the Blythe Hill Tavern on Stanstead Road, almost in Catford. Both are traditional pubs serving the local community and are assets to the local area. The Blythe Hill Tavern has won several awards from CAMRA.

Finally, of the 13 pubs, seven are located ‘centrally’, i.e. in or very near Forest Hill railway station; three are in or near Honor Oak Park; one, the Railway Telegraph is a bit further out; and two, the Prince of Wales and The Blythe Hill Tavern, are on the fringes of the SE23 post code. All of them deserve to be cherished. 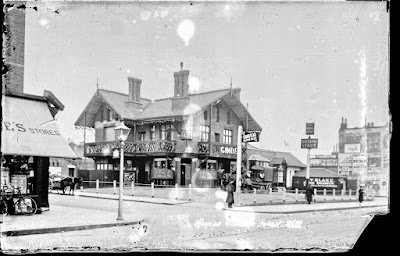 I know it's three years since this interesting article but here goes:
As a teenager I used to drink in the Moore Park Hotel, along with several other mates. We were a small group of leather clad bikers who liked to think of ourselves as tearaways, but did very little tearing... This would have been around the mid-seventies when the place was a quiet suburban pub with a lot of rooms to let (hence 'Hotel'). This was way before the 'real beer' revolution and I seem to remember that Worthington E and Harp Lager were about as good as it got, so not very.
In a strange twist of fate I ended up buying the building after it had been closed, then squatted and made largely derelict. My partner and I spent two years converting it into very reasonable apartments, keeping any original architectural features we could (glass, woodwork, plaster mouldings). It has proved very popular, some tenants have been there for decades. It's always a shame to lose a pub, but at least we rescued the building. Currently in 'lockdown' in another country, I yearn for a pint of Youngs's Ordinary' in a
convivial South London pub (RIP The Woodhouse, a subsequent local). Oh Well...
Zed

I had my 21st in the Moore Park as drank there a lot at that time, when it was owned by Jim Drum. (Of Drummies down on FH road) and its sad to see it gone. Lucky you that you bought the building. Must have been a lot of hard work renovating it :-)