Join the Forest Hill Society and Churches Together in Sydenham and Forest Hill, for tree lighting and carols on Saturday 3rd December 2016 at 3:30pm

We will be officially switching on the tree lights outside Forest Hill station.

Followed by the official switching on of the tree lights in Kirkdale at 4:45pm. 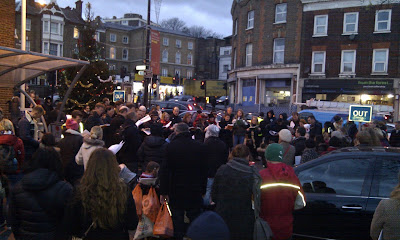 Your guide to all the events this December across SE23 and SE26. 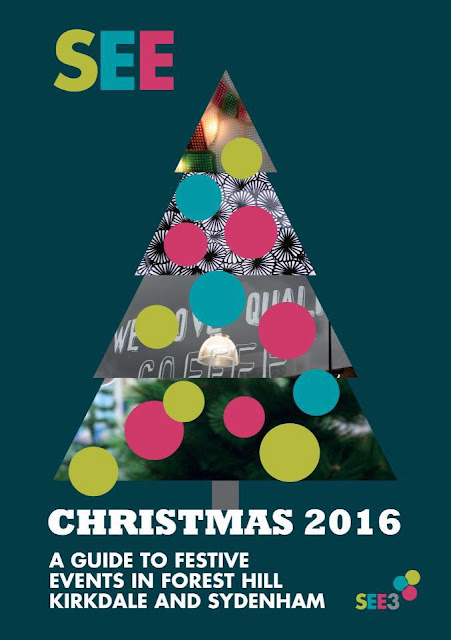 Highlights in Forest Hill include:
With lots of other events throughout December.
at Wednesday, November 23, 2016 No comments: 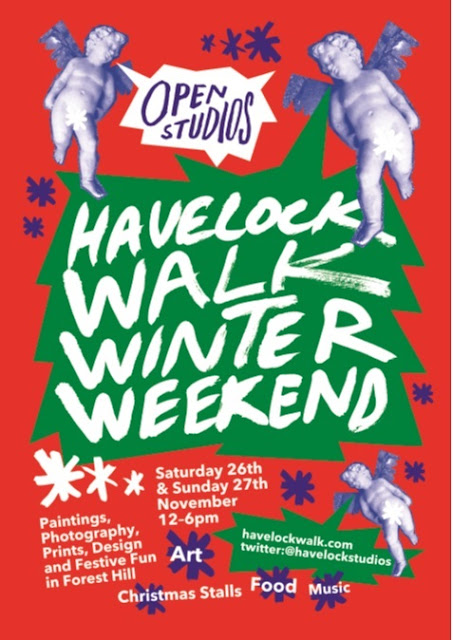 Proposal for a One-Way Scheme on Perry Vale

The Forest Hill Society has drafted a proposal for a one-way scheme for a small section of the Perry Vale road.

The premise of this proposal is that with some limited changes to the road/walkway layout, this area could set the basis for a more attractive location: for commuters, residents and businesses. While an outline scheme has been proposed, we would expect that a more detailed review (including a possible temporary trial) would be carried out by the appropriate planning and transport authorities prior to full implementation.

We invite you to consider the proposal (shared below), and to let us know your thoughts via the survey link.

We plan to then include all responses in a report, and possible Petition, to Lewisham council, as your views will bring some local context to the proposal in terms of local support, perceived benefits of the scheme and any potential issues.


Opportunity Statement
Perry Vale is the road adjacent to Forest Hill Station.
While in recent years the suburb of Forest Hill has undergone healthy regeneration (in part due to the improved connectivity of its rail station), it cannot be said that both entry points to local infrastructure hub have thrived to the same extent.

Perry Vale businesses naturally report high passing footfall, but note that the area does not yet represent a destination for retail or leisure.

We propose that there exists an opportunity to foster the kind of organic improvements in area that have so far eluded it: principally through reconfiguration of road usage.

There are already commercial developments underway which can contribute to the regeneration of this de-facto hub entry point, and we feel that the proposed changes presented here would impact positively on the character and utility of the area concerned, and reflect many principles of key London and Lewisham policies.

After much consideration, and discussions with businesses and residents, we invite Lewisham council to consider this proposal in its planning cycle. 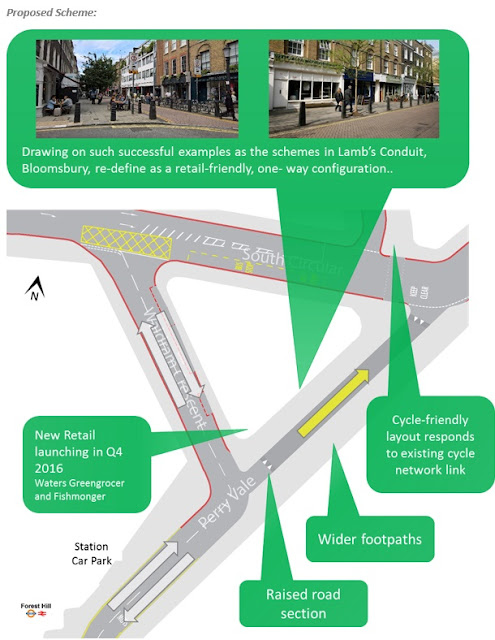 Please complete our survey to let us know your views.
at Thursday, November 10, 2016 8 comments: 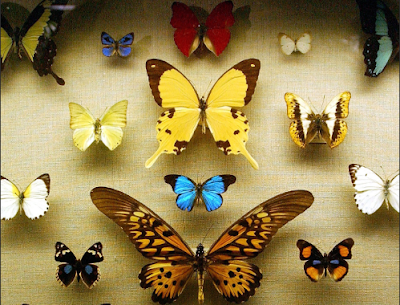 Horniman Museum and Gardens have submitted an exciting planning application to build a Butterfly House in the gardens, replacing the park keeper's house at the top of the animal enclosure.

We hope to bring you more information on this great new attraction in the new year.

Govia Thameslink Railway (GTR) has launched an extensive consultation which sets out proposed changes to the timetable which will be operated by GTR in 2018 following completion of the Thameslink Programme.

These proposals include:
a) Diverting all our East Croydon services to West Croydon - making it take longer to get to Gatwick and other destinations in Sussex.
b) Reducing our peak services to London Bridge to four trains an hour (the same capacity as the rest of the day). These services would be replaced by five carriage Overground trains to Dalston Junction.
c) Increasing services via Crofton Park to four trains per hour

The Forest Hill Society opposes the first two of these changes and supports the third. But it is important that local residents respond to this survey to show the strength of feeling.

Survey responses should be completed at https://www.surveymonkey.co.uk/r/2018timetableconsultation
To help you respond to the large number of questions across all the Southern, Thameslink, and Great Northern Services, we have compiled a list of the nine questions we believe you should answer, with some explanation of each.

Louise House
Tara described the many improvements during the past year including the new landscape at the front connecting Louise House to the library, and planting in the garden to the rear.  Feedback from the public was important in guiding this work e.g. the need for wider pavements.  A grant had been obtained for the next big project, which is renovating the basement, and the improvements to Dartmouth Road scheduled to commence in 2017 would link Louise House, the library and Forest Hill Pools.  A highlight had been the Holiday Summer Club and this would continue next year.  The Society newsletter will keep everyone up to date on what’s happening in Louise House.

Forest Hill Library
The new Library Manager, Simon Higgs briefed the AGM on our community library which re-opens on 24 October run by a consortium comprising V22, the Forest Hill Society and the Trader’s Association.  The consortium really cares about the future of the library and literacy in Forest Hill.  There had been a fantastic response from the community.  A crowd funder target of £6000 had been reached in just two weeks.  Already 110 volunteers had signed up.  100% of the studios for rent had been let on day one.  A Friends Membership scheme was up and running and a web site, Facebook and Twitter accounts.  But more volunteers are needed.

A Management Board is in place and Advisory Boards will be formed including one for young people.  Feedback from the public is critical if the community library is to be success.  Donations of books are welcome.  If they are not quite right for the library, books can be sold to raise funds.

Forest Hill Society DevelopmentsMichael Abrahams summed up the year (a copy of his report was shared at the meeting). The library had been the focus – first the fight to keep it under council control and then working to make sure the library had the best possible future.

The two big events had been a great success – the Burn’s Night supper, which would be repeated and the Society’s 10th anniversary celebration when Shakespeare “visited” Forest Hill in the shape of Teatro Vivo theatre group.

Work on Dartmouth Road was set to begin in 2017 and now the Society had plans to improve Perry Vale for pedestrians and cyclists.

The improvements at London Bridge station were now having a positive effect on train services but the latest consultation with Southern Rail indicated a reduction in peak hour services and no trains to East Croydon in 2018.  While Overground plan to run extra services these should not be seen as an offset for reduced Southern services, which have longer trains. The Society will submit a response to the consultation and individuals are encouraged to do so too.

The most visible part of the Forest Hill Society’s work in 2015-16 was its planting at the station and in the town centre; for the fourth year running Forest Hill was judged to be “outstanding” in the RHS awards. The new ‘Tyre Towers’ in Perry Vale were innovative and the Edible High Road tubs had been revived.  More volunteers are needed to help with planting.  Another session is planned for 29 October and there is a litter pick up on 12 November.  A workshop supported by local architects and planners had produced a design for a new building for the Devonshire Road Nature Reserve. Quetta Kaye’s Environment Committee Report was shared at the meeting.

In discussion, the following main points were made:
•    Trains – would direct services run again to Charing Cross?  Probably not, though the Society is keen to see late running services; a 24 hour Thameslink Service was relevant in this respect.
•    The Tewkesbury Lodge Resident’s Association is concerned that tarmac laid up to trees leads to roots breaking up pavements.  This is unnecessary.  There are good examples elsewhere e.g. Court Lane where drainage is better and this should be the approach adopted elsewhere.
•    Cycling – a strategy being developed with the Sydenham Society will describe improvements for cyclists and pedestrians in the Forest Hill – Sydenham – Perry Vale area.  The strategy is to be discussed with local councillors.

Perry Vale Proposed Improvements
Rob Owen described a proposal to make the north end of Perry Vale one way as a means to re-generate the area to the east of the station (a draft opportunity statement was shared at the meeting showing the proposed new configuration).

There was lots of support for the proposals at the meeting.  The area for development could be extended to the car park.  One way north was probably the best direction of travel.  The proposals might include improvements to shop fronts too.  Could the bus stop be nearer the station?
Councillor John Paschoud supported the proposals.  He was happy to discuss them with fellow ward councillors and with the Lewisham Highways Department.  This work was probably suitable for the “Minor Works” Programme, which made it a realistic proposition.

Treasurer’s ReportMichael Abrahams presented the report.  Accounts were shared at the meeting.  While spending had exceeded income during the past year the Society had a healthy bank balance.  Income from membership fees was constant.  Significant items of expenditure were on the Shakespeare on the High Street (also supported by a Ward Assembly grant) and a financial contribution to Forest Hill Fashion Week.

An additional 14 members were elected as ordinary members of the executive committee.

Other Business
Street Lighting – To save £165,000 Lewisham is to reduce street lighting in residential areas it seems without consultation (councillors have not been consulted either).  Apparently, there was a pilot in 2015 when three streets in each ward were chosen.  The lack of consultation is regrettable given the concern about the risk of rising crime and road accidents resulting from less street lighting overnight.  Will this be extended to walkways like the one beside the railway?  Might businesses be persuaded to sponsor lighting in certain roads?  Maybe they would consider reducing the lighting for fewer hours?  If the system is such that individual lights can be controlled this may provide scope for a compromise.

Do we have an update on the plans for the old police station?  An application to convert the site into housing including social housing has been accepted.
at Saturday, November 05, 2016 No comments: