Save Our Library - Saturday 5 February 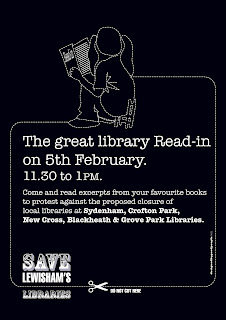 Saturday, 5 February sees a national read-in campaign to save libraries threatened with closure due to government cuts.

Sydenham, Crofton Park, New Cross, Blackheath and Grove Park Libraries will all be taking part between 11:30 and 1pm.

The Crofton Park campaigners are encouraging people to go along and simply choose a book from the shelves and start reading it. At Sydenham Library, the Save Sydenham Library campaign are planning a party atmosphere, with posters, balloons, cakes and drinks. There will be a few speeches and readings by local authors, poets and celebrities including the life peer and philosopher Baroness Mary Warnock, and Guardian columnist Lucy Mangan. Also expected to attend are children’s writers of the Stripy Horse series Karen Wall & Jim Helmore, local author Julie Day and poet Chrissie Gittins whose poem "Longing to be Heard" is in honour of Sydenham Library.

Highlights of the day will be readings from each of the authors, a singing and music session for children, and a party outside the library. The event will culminate in a balloon release. There will also be a performance by Sly and Reggie, the dub group who have penned the song "We Love Libraries".

Seats are extremely limited so if you need to sit down please bring a folding chair with you.

Contribution of cakes and biscuits will be welcomed - simply bring them along to Sydenham Library at 11am on the day.
at Monday, January 31, 2011 No comments:

Muddy Boots for Under 5s

Muddy Boots Nature Group will be starting again at the Devonshire Road nature Reserve in March.
Aimed at the under 5s, this outdoor group will meet every other Saturday from 10am to 12.30pm. Activities include

The group costs £1 per family and there is a maximum of two children per adult.

Please email dreserve@gmail.com for further info about the group
at Friday, January 28, 2011 No comments:

Get funding for your Big Lunch 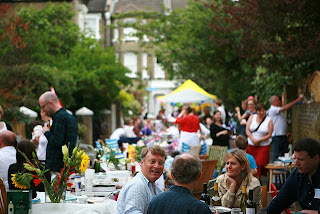 Lewisham Council is encouraging residents who would like to take part in this year's Big Lunch to apply for a grant from the Big Lottery Fund by March 2011.

The Big Lunch is an annual one-day get together with your neighbours - wherever you live. It can be anything from a simple lunch to a full-blown street party with DJs and a home cooked feast. This year's national Big Lunch will be taking place on Sunday 5 June and grants are available for those organising events for over 50 people. People can check their eligibility for a grant from the Big Lottery Fund on the Awards for All website.

The Big Lunch aims to get as many people as possible across the country to sit down with their neighbours and share lunch together. Last year, 57 Big Lunches took place in Lewisham - the highest number in London!

If you are interested in holding a Big Lunch on Sunday 5 June 2011, register your interest on the Big Lunch website, where you can get ideas and inspiration, receive a newsletter, get updates via Twitter or Facebook and follow and comment on the national blog. If you have questions or need assistance, then Lewisham Council can offer support to people interested in organising a Big Lunch in their street or other venue if you call them on 020 8314 7321 or through their website
at Friday, January 28, 2011 No comments:

Janet has been the Director at the Horniman since 1998. Before joining the Horniman, she worked at the Imperial War Museum and was the Director of the Livesey Museum. She is also a visitor of the Pitt Rivers Museum at the University of Oxford, a trustee of the Collections Trust, a Trustee at the London Transport Museum and Chair of the Women Leaders in Museums Network

We would like to congratulate her on the award and wish her and the Horniman success for many years to come.
at Thursday, January 27, 2011 No comments:

The inaugural walk of the Forest Hill and Sydenham Societies' Walking Club will take place on Saturday, 5 February 2011.

Leaving Sydenham Station by Network Rail at 10.24 am (Forest Hill Station at 10.27 am, Honor Oak Park at 10.29 am), the walk will be led by Andrea Bradbury and Pat Trembath. We will follow (and divert from) the northern Thames Path between London Bridge and Canary Wharf, taking in various places of interest over a distance of about 5 miles and at a medium pace. We will return by London Overground from Canary Wharf.

As this is our first walk we thought that it would be nice to end in sociable style with lunch at the Dartmouth Arms in Forest Hill at approximately 1.15pm. By finishing on home territory with lunch we can ensure that everyone has the opportunity to get to know everyone else.

Those who come on the 5 February walk should indicate at the start of the walk if they want to be included in the lunch so we can phone ahead to reserve tables at the Dartmouth Arms. If you have any queries, or would like a reminder, please contact Andrea or Pat by email who will send a reminder, together with mobile numbers (for use on the day only) to the walking group at the beginning of February.

Please Note: there are no toilets on the walk after London Bridge(apart from pubs in an emergency). Toilets on platforms 1 and 3 at London Bridge are usually clean and free.

Sights you will see

The walk mainly follows the Thames path from the north side of
London Bridge to Canary Wharf. Places of interest along the route are:

The Tower of London

Wapping High Street — a street built in about 1570 to link the quays in the city to the storage warehouses.

The London Docks — built 1799—1815. The Western and Eastern docks were linked by Tobacco Dock. Specialised in ivory, spices, coffee, cocoa, wine and wool. Closed in 1969, they were sold to Tower Hamlets to turn into public housing. Was derelict until London Dockland Development Corporation built 1,000 properties. “Fortress Wapping” Rupert Murdoch’s printing works were built on the Western docks.

Turner’s Old Star pub. The painter Joseph Turner, who drew inspiration from the Thames and Docklands throughout his life never married, but women were always important to him and he had four children with a number of mistresses. In 1834 he met Sophia Booth, a widowed landlady from Margate. When Turner inherited two cottages in Docklands he set Sophia up as a landlady in one of them. Her pub was known as the Old Star. The same pub survives today, as Turner's Old Star.

Wapping Pier Head. A double row of Georgian houses facing each other built for officials of the dock company.

Town of Ramsgate pub - is an old, narrow building next to one of the first warehouses to be converted into apartments (well before the 80's property boom) and backs onto the Thames where it has a small terrace with a limited view of the river. There are all sorts of historical claims made about the place (eg Judge Jeffreys was captured here attempting to flee to the continent and the crew of HMS Bounty took their last drink here before setting sail).

Headquarters of the River police.

Wapping Overground station at the end of Brunel’s Tunnel under the Thames completed in 1843—it took 20 years.

Prospect of Whitby pub lays claim to being the site of the oldest riverside tavern, dating from around 1520. In the 17th century, it became the hostelry of choice of "Hanging" Judge Jeffreys as well as writers Charles Dickens and Samuel Pepys. Views from the pub were sketched by both Turner and Whistler. The pub also features briefly in an episode of Only Fools And Horses.

The London Hydraulic Power Company’s pumping station—1893-1977 supplied hydraulic power for cranes and lifts for the wharves of docklands and for theatres and office buildings as far away as Earls Court. After its closure as a pumping station in 1977, the building was converted and reopened as an arts centre.

Rotherhithe tunnel ventilation shaft — next to this is a tablet commemorating Elizabethan navigators who sailed from the Thames to find the North West passage.

Narrow Street — old link between Shadwell and Limehouse is home to a Gordon Ramsey pub — the Narrows.
at Saturday, January 22, 2011 No comments:

Maybe you had too many mince pies at Christmas, or maybe you would just like to make some new friends and kick a ball around. Either way, there are two new groups setting up locally, one for adults and the other for kids.

Saturday, 29th January 10:00-11:30 at Blythe Hill Fields
Local parents Emily and Ian are organising the first of what will hopefully be a regular Saturday morning activity. Meet at the flat area near the adventure playground for the chance to meet other families in the area and for the kids to have a good, old fashioned kick around. Contact Emily on 07967 836 018 or emilyseed@hotmail.com or Ian on 07908 907 122 or ianmc5@hotmail.com for further details.
at Wednesday, January 19, 2011 No comments:

As many of your will know it has been a long and bumpy journey to get to this point, but this ceremony finally marks the beginning of the first stage of building the new leisure centre.
at Monday, January 17, 2011 1 comment:

We have recently heard from Caroline Pigeon that the Jubilee line upgrade (which was supposed to be delivered in December 2009 before the ELL reopened) will now be delivered this spring. When complete, the new system will enable London Underground to run more trains on the Jubilee line, increasing capacity by 33 per cent and cutting journey times by around 22 percent.

London Rail also informs us that work was undertaken over the festive period on the new extension to the Overground service between Dalston Junction and Highbury & Islington. Signalling systems and High Voltage Power systems were successfully commissioned, in advance of successfully running the first test train at the end of last week. The project is progressing well and is expected to open on schedule in spring 2011, with a 'soft start' expected at the end of February. Once the service is up and running, all the Overground trains from Forest Hill will run to/from Highbury & Islington at the northern end of their route instead of Dalston Junction. (The New Cross services will continue to run between New Cross and Dalston Junction)

The final phase of the East London Line upgrade (ELLX2 from Surrey Quays to Clapham Junction) will not now be delivered before the Olympics in 2012. The original timetable for development had aimed for a May 2012 opening, but TfL have confirmed that this has now slipped and it will be the end of 2012 before we see the extension opened, as the timescales for the project were pushed back pending the outcome of the Government's Comprehensive Spending Review. TfL have also had to take account of the restrictions on construction work being carried out before and during the Olympic and Paralympic Games, which have also affected the programme.
at Thursday, January 13, 2011 No comments:

Give and Take Day

Devonshire Road Nature Reserve (near the junction with Tyson Road)

It's a good time of year for having a clear out so this is the perfect January event! The idea is that you bring along items you don't want and swap them for something you do want - AND ALL FOR FREE!
Suggested items include DVDs, CDs, small electrical items, bikes, lamps, plants, kitchenware, books, clothes, toys.
Items should be in good condition and easy to carry home.

We're grateful to Lewisham Council for their help and practical support with this event.
at Thursday, January 06, 2011 No comments:

This has become a very popular annual event for the Society. You’ll need to book directly with the pub on 020-8699-3311. We’ll provide an authentic Scot to address the haggis. Here’s the menu…

Complimentary nip of scotch whisky to toast the bard