We are very excited that Franklins will be collaborating with The Butchery to provide fresh fruit and veg throughout December at 49 London Road. Both have been regulars at our food fairs during 2012 and it is great to welcome them to the high street for December.

There will be an opening special of dry aged native breed beef mince at 6.95/kg, and in the afternoon home made Krupnik (Polish Honey Christmas Vodka) to warm up visitors.

There's lots more going on this weekend across Forest Hill, Kirkdale, and Sydenham and you can find out more at SEE3.co.uk or download the full SEE3 brochure for December.

Shutter artwork by Supermundane and Butch. 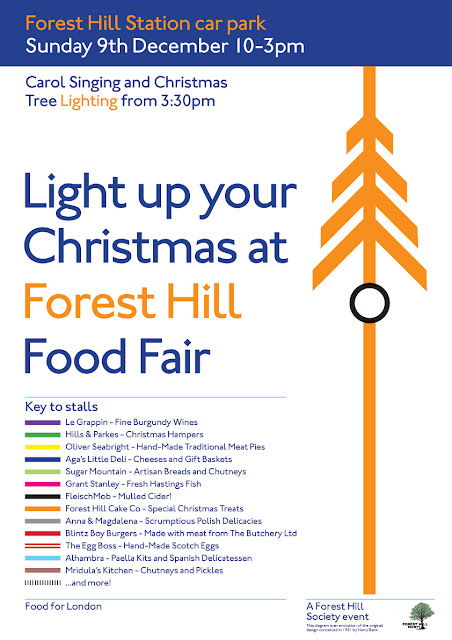 SEE3 (the Forest Hill, Sydenham, and Kirkdale Portas Team) have put together a great booklet on the events taking place around SE23 and SE26 during December, and wow - there's a lot going on!

Many of you in the area will be receiving a copy through your mailbox soon, but if you just can’t wait, download the SEE3 Christmas Events List right now, and keep an eye out for it on your mat.
at Monday, November 19, 2012 No comments:

Rather than buying a mass produced present for your loved one, why not make a lovely piece of silver for them?

In just three hours you will make one (or maybe two) of these lovely items under the watchful eye and guidance of experienced jeweller and university lecturer Paul Ravn. Depending on your ability, you will start with the twisted rope ring before moving on to the brooch or pendant. Make sure to get the ring size for your intended recipient before you come.

There will be two sessions on Saturday, 24 November.

The morning session (from 10am to 1pm) will be for anyone 8 years of age or older. Adults supervising children do not need a ticket unless they wish to make some jewellery themselves (which we would, of course, recommend). Maximum of two children under 18 per adult.

The afternoon session (from 2pm to 5pm) is currently for adults only.

Join us to celebrate a tremendous year in the regeneration of Forest Hill and let us know what we should be doing in the next year. The Forest Hill Society has made a real difference and we would like you to consider joining our team to make stuff happen around Forest Hill. A small amount of time from more people would allow us to make even more of a difference to Forest Hill and Honor Oak.
at Thursday, November 15, 2012 No comments:

South London Healthcare Trust (SLHT) was formed in 2009 by the merger of 3 hospital trusts: Queen Mary Sidcup (QMS), Queen Elizabeth Hospital (QEH) at Woolwich, and Bromley Hospitals NHS Trust, whose biggest hospital is the Princess Royal University Hospital (PRUH) at Farnborough. The main reason for the merger was the year on year deficits they were accumulating, which by then had added up to a debt of £149 million. Sadly, the merger has not solved the problems, and SLHT continues to operate with a loss of over £1 million per week. It is predicted to have a further debt of £207 million by the end of this financial year. The total cumulative debt will be £356 million. This is on an annual income of about £440 million.

In July, the Secretary of State for Health appointed Matthew Kershaw as the first ever Trust Special Administrator (TSA). The SLHT Trust Board was dissolved, and the TSA is running the Trust, and developing proposals for the future. His draft proposals were published last week, and we have until midnight on 13th December (30 working days) to comment on them.

The full report is 84 pages long, and lists many failings within the SLHT including that it is the bottom 10% Trusts for A&E wait times, recent non-compliance with Care Quality Commission  standards (now improving) and high expenditure on temporary staff. The TSA says there is evidence of poor leadership, poor record keeping, and poor financial governance. The PFI contracts cost £70 million each year.

The proposals are presented under 6 headings. Unsurprisingly, the TSA suggests the hospital should be run more efficiently, outsource various services and lose many jobs, including 140 doctors. Less expected are the recommendations that the debt be written off, and some extra money be given to QEH and PRUH to cover some of the excess costs of the PFI. I think this is to be welcomed, but we do not know if the Department of Health will agree.

The TSA proposes the break-up of the SLHT, with the PRUH possibly taken over by Kings Healthcare partners, or put out to tender. The suggestions here are very vague.

The concerns for those of us in Lewisham are the detailed proposals for the Lewisham Healthcare NHS Trust, which is not even part of the SLHT. It should “join with” QEH, and Lewisham A&E should be downgraded to an urgent care centre. A&E itself is not particularly expensive, but patients who are admitted to hospital need emergency surgery, ITU, X-rays and scans...

The TSA suggests developing a centre for elective surgery at Lewishan, but even if you have elective in-patients, critical care services quickly become non-viable. This raises the question of whether is is safe to deliver babies at Lewisham, and so the TSA suggests closing the delivery ward. The future of children's services, which are particularly good at Lewisham, are not clear. The TSA points out that reduced services at Lewisham would mean that some of the land there could be sold off to raise money.

Unexpected consequences would include loss of the GP training scheme, which is based at the hospital. Many graduates of the scheme, such as myself, stay on to work in the area. Typically, GPs train in medicine, surgery, paediatrics, obstetrics and gynaecology, A&E and mental health, so need a hospital site with all these departments.

Lewisham is a very well run hospital, which had a small deficit a few years ago, but it has worked to turn this into a surplus. In the last year they have opened a brand new A&E, costing £12 million, without using PFI. It works well with local GP commissioners and the council, and new collaborative pathways have been developed (e.g. musculoskeletal, memory service). All this is threatened: Lewisham commissioners will not be able to plan services for the people of Lewisham. There is also a real risk that instead of Lewisham Hospital improving the management of QEH, the link could ruin the finances at Lewisham.

It would seem that Lewisham is being penalised for not having a ruinous PFI contract!

The report does not contain enough information to convince me that the financial modeling is correct.  Is the TSA is assuming that the 70 people admitted each day to Lewisham Hospital will instead go to QEH?  The report claims it will only take residents of Lewisham an extra 14 minutes to reach QEH A&E by public transport. I think it will take longer.  I do not think that most people would go there anyway: as a GP I have spent the last 6 years asking patients which hospital I should refer them to. Only one person chose QEH!  If Lewisham were to close, I personally would go to Kings.  There are very significant questions about the capacity of Kings or QEH to cope with extra A&E attendances, and indeed with taking on the 4,500 babies that are currently delivered at Lewisham. Obstetric services throughout London are severely stretched, partly due to a huge increase in the birth-rate in the capital (Lewisham, schools are learning about this, as they have to build more classrooms) and partly due to a chronic shortage of midwives. The report says nothing about this, but I have heard many stories about how A&E and obstetrics at both Kings and QEH  are already struggling to cope.

There are a number of other areas of discussion in the report. I will briefly consider two general areas which the TSA uses as clinical arguments to support his proposals.

The first is the idea of care in the community, or in people's homes. This is generally thought to be a good idea, and many people would wish to be so supported. However, there is no good evidence that supporting unwell people at home is much cheaper than doing so in hospital: the nurses have to spend time travelling from one place to another, and monitoring someone's condition is difficult too, especially if they live alone. Sensible interventions do not always prevent admissions: I remember seeing an elderly lady who was unwell on a Friday. She had a urine infection, I prescribed the right antibiotics, and got the pharmacy to deliver them that day. But she was still admitted to hospital the next day by SELDOC as the infection made her confused and she was not remembering to take the antibiotics. Primary care is being cut in the same way as other parts of the NHS.  There are not really enough GPs, and certainly not enough district nurses or health visitors. We have been significantly understaffed in Lewisham for some years, and services are really struggling with the existing workload. It would require very significant up front investment before community services could even hope to make any real difference to hospital admission rates.

The second clinical area he refers to concerns consultant rotas, especially cover at nights and weekends, in A&E, medicine and obstetrics. There is reasonable evidence that having more senior staff, more involved in patient care, improves outcomes and reduces death rates somewhat. However, if you make people work at weekends, you have to give them time off during the week, thereby downgrading current weekday services, which might end up with the same number of deaths but just spread evenly during the week. Merging hospitals does not necessarily solve the problem, because you are then making one consultant responsible for more patients. Of the 70 patients admitted daily at Lewisham I would estimate that about 50 of them are medical patients. The on-call consultant can only spend a short time with each one as it is. The report actually refers to recommendations that each patient is reviewed twice in the first 24 hours. Assuming the consultant did not eat or sleep, and did not spend any time walking from one bed to the next, that is 14.4 minutes per patient review. This does not seem feasible! If you then merge hospitals and expect one consultant to cover double the number of patients, it quickly becomes ludicrous. You need more consultants!

I am aware that for many people arguments about health service policy can seem abstract and remote, but if you do nothing else I would urge you to consider where you would go if your felt you were seriously ill, and there were not A&E at Lewisham, and then tell the TSA about it.

The Forest Hill Society supports the campaign to keep a fully functional A&E at Lewisham Hospital. To find out more about the campaign please visit http://www.savelewishamhospital.com/

You can support the campaign by signing the petition at http://www.ipetitions.com/petition/lewisham-hospital/ 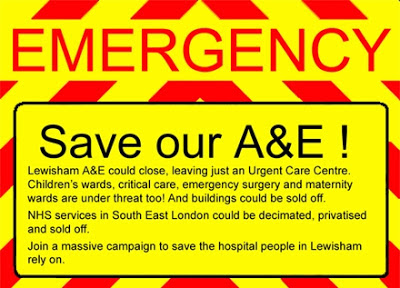