There will be a public meeting to discuss the planning application for Forest Hill Pools because Lewisham council have received 14 objections. The majority of these objections relate to parking issues, but there are also some objections to the size and design of the extension which houses the Café and air handling equipment.

Tuesday's meeting will be a chance for the developer to explain their plan, followed by a question and answer session. Councillor Philip Peake will chair the meeting and the developer will be represented by Savills (Lewisham's agent).

The aim of the meeting is to see how the concerns of the objectors can be mitigated. While our own submission was in support of the application, it did express some reservations about the scale, bulk and design of the extension as well as concerns for pedestrian safety in the coach drop off and disabled parking area among other points. Local residents are also understandably concerned by the lack of on site parking. 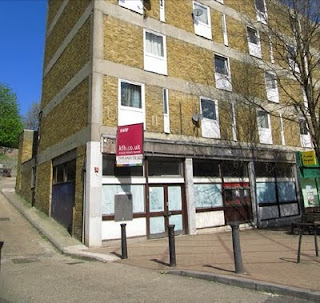 A planning application has been made by the owners of Jam Circus for the former Post Office on Dartmouth Road. Below is the response from the Forest Hill Society.

On behalf of the Forest Hill Society I would like to recommend approval of this proposed development which will bring a new restaurant/bar to a key location in Forest Hill.

As has been recognised in the application, some noise prevention measures should be considered to protect residents living directly above the restaurant. We are pleased that this has been included by the applicant.

We additionally believe that this location would be ideal for a few tables to be located in front of the restaurant during the summer months, adding to the vitality of the high street and making best use of this empty area during the day time. We hope that this is something that can be considered by the applicant and by the council.

We wish every success to this business which has a good reputation across South East London and will help enhance Forest Hill town centre. 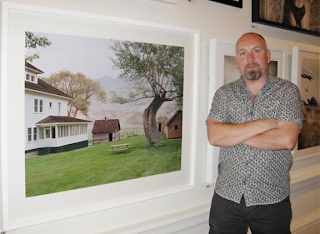 We would like to offer our congratulations to Paul Murphy, local resident and member of the Society, on winning the "Rose Award for Photography" at this year's Royal Academy Summer Exhibition. Paul is only the second person to win this award.

The Royal Academy's annual Summer Exhibition, which opens today and runs until 22 August, is the world’s largest open submission contemporary art exhibition and attracted over 11,000 entries this year.

Now in its 242nd year, the exhibition continues the tradition of showcasing work by both emerging and established artists in all media including painting, sculpture, photography, printmaking, architecture and film. This year’s co-ordinators, Royal Academicians Stephen Chambers and David Chipperfield, have selected works for the exhibition around the theme of ‘Raw’.

The winning photograph, which was taken in Idaho in the USA, is from a series on Backyards which looks at how we use our outdoor garden spaces and how they describe the owners of the attached property.
at Monday, June 14, 2010 No comments:

A planning application has been submitted for 29 Ewelme Road.

The Forest Hill Society has objected to this development on the grounds of over-development and concerns relating to car and cycle parking.

You can read the full objection here.
at Saturday, June 12, 2010 No comments:

If you didn’t fancy the crowds at Chelsea this year, this is the next best thing! You’ll see a variety of gardening styles from formal allotment layouts to cottage style. There are grand views over South East London from the top, ponds & beehives. There will be three guided walks by allotment members and they start at 2.00pm, 3.00pm & 4.00pm. or you might prefer to do one of the self guided walks.

The main entrance to the allotment site is in the Recreation ground Car park just off Honor Oak Park SE23. The site is 2 minutes walk from Honor Oak Park Railway station. P4, P12, 122, 171, 172 buses. Admission is free but donations welcome. Refreshments will be available. Please wear stout footwear, as it can be slippery if it has been raining and due to the uneven parts of the site some parts are not accessible for Wheelchairs, Buggies or People with walking difficulties although the lower part is. There is a compost toilet on site.


Sydenham Woods walk - Sunday 20th June, 3pm.
Meet at the gate in Crescent Wood Road. This is a guided walk led by Ashley White, the Conservation Projects Officer for Southwark. The local historian, Steve Grindlay, will also give a short talk about the history of the area. The walk will last about1 hour. We would appreciate small contributions for this walk.


The Sydenham Arts Festival’s Summer Season 2010 - has over sixty events during the three summer months (and a little bit of September!) - diverse music, dance, drama, comedy, film, poetry, visual arts, children’s events and workshops – utilising a variety of local venues and parks. It’s a fantastic community event and we really do encourage you to support it. There’s far too much going on to include details in this eNewsletter so please go to their wonderful website www.sydenhamartsfestival.com
at Tuesday, June 08, 2010 No comments:

Living on the 'Culture Line', we really are spoilt for choice. Not only do we have excellent Museums to visit, but we have a wonderful selection of local festivals to choose from. The Sydenham International Music Festival is in full swing at the moment and runs until 27 June, while the Sydenham Arts Festival kicks off this Sunday and runs until September 11. Slightly further afield, Brockley Max draws to a close this weekend having been running since 27 May.

The Sydenham Arts festival has over 90 events scheduled, featuring dance, drama, poetry, film and comedy as well as workshops and childrens events.

The backbone of the International Music Festival meanwhile is the amazing, virtuoso St Bartholomew Festival Orchestra that gathers together the most prestigious players from London‘s internationally recognised orchestras. Together with Festival Director Robert Trory, their reputation is now well established. This year is the seventh anniversary and presents a real feast of live music to match anything on offer in London with a stunning lineup including international opera star Susan Bullock. All concerts are held at St Bartholomew's Church unless otherwise specified.

The festival was opened on 23 May by the ever-popular virtuoso Russian violinist Sergey Dogadin who gave a performance of Brahms' Violin Concerto. He also teamed up with Martin Roscoe on piano for a further recital last Sunday and there have been two other concerts; EMMA SELWAY - mezo-soprano performed at St Christopher's Hospice and the FIDELIO PIANO QUARTET made its fourth appearance in the Sydenham Festival.

However, worry not! There are still plenty of gems still to come.

On Tuesday 8th June at 7.30pm the LONDON CONCHORD ENSEMBLE will be performing at the Dolphin (£10). This fun evening with an American flavour (and some Mozart and Beethoven thrown in for good measure) is given by London’s leading mixed instrument group that has toured the UK, Europe and North America.

This is followed on Sunday 13th June - 7.30pm - by the SUSAN BULLOCK CELEBRITY CONCERT (£18, £12 concs.). Recognised as one of the world's leading Wagnerian sopranos, Susan Bullock will come together with Maestro ROBERT TRORY and the stunning ST.BARTHOLOMEW FESTIVAL ORCHESTA in Wagner's 'Wesendock Leider' and Cantaloube's 'Songs of the Auvergne'.

The ever popular CHILDREN’S CONCERT (£6) returns on Saturday 19th June - 11.00am and features 'The Carnival Of Animals' narrated by Jamie Ripman. This is a lively working of Scottish Dances with bagpipes for good measure and is a fun-packed concert for children of all ages. Children are encouraged to come dressed as one of the Animals in the Carnival (a fish - a lion - a donkey - an elephant - a kangaroo .....) for a Fancy Dress competition.

Also making a welcome return is the young Serbian cellist MAJA BOGDANOVIC who stunned the audience in 2009 with her performance of Shostakovich Cello Concerto. Maja will take part in the FRIEND’S EVENING on Friday 25th June - 7.30pm, an evening of talk with music, hosted by Noel Craven with MAJA BOGDANOVIC & ROBERT TRORY (£10 - free to Friends of Sydenham Music) before finally closing the Festival with Elgar's Cello Concert on Sunday 27th June - 7.30pm at the CLOSING CONCERT (£18, £12 concs.)
at Friday, June 04, 2010 1 comment:

We are pleased to announce that we have been allocated a stall at this weekend's Forest Hill Day, which is being held at the Horniman Gardens from 1 pm to 6 pm on Sunday, 6 June.

As well as over 40 stalls selling a variety of crafts and food, there will be plenty of entertainment for all the family including an inflatable slide and assault course, donkey rides, face painting, Punch and Judy and birds of prey. Live music will be provided by the Ian Petrie band and Rough Justice.

Forest Hill Day is organised by the Forest Hill Traders Association and supported by funding from the Mayor of Lewisham and the Town Centre Management team.
at Friday, June 04, 2010 No comments:

The Forest Hill Society has submitted a response to the planning application for Forest Hill Pools.

We have been through the application in some detail and write in support of the proposals. To a great extent we think this is a very good scheme, in a good location, and in particular:


You can read the full response here.