Forest Hill Library in South London re-opened today, 24 October 2016, as a community library with specialisms in philosophy and the visual arts. A counterpoint to the fate of so many similar libraries across the country, the building will continue to act as a community hub and library, with events for children, facilities for jobseekers and activities for pensioners, but will have some unique features which will make it a destination for people from across the capital.

The Grade II listed Forest Hill Library originally opened in 1901, and has been under the management of the London Borough of Lewisham for many decades. The successful community bid to run the library was put together by V22 – the art organisation based in neighbouring Louise House; the Forest Hill Society – the main residents’ association in SE23; the Forest Hill Traders’ Association – a local business forum; along with several concerned individuals.

Plans for the building include:
•    a specialist art library
•    a philosophy collection put together by the Philosophy Foundation, along with a range of philosophy events for schools, young people and adults
•    new second language sections in the children’s library
•    a collections curator who will take advantage of the 5 million-plus books available through the Lewisham Library and Information Service and the London Libraries Consortium to create browseable displays, including a monthly crowd-sourced theme
•    a dedicated schools’ co-ordinator
•    a continuation of existing events such as the origami club and under 5s stories and songs, as well as new events inspired by the partners, the community and tenants

The Forest Hill Library building will be staffed by volunteers, 110 of whom have already signed up. The initiative is being kick-started by a Crowdfunder campaign and Friends of Forest Hill Library scheme which has already raised several thousand pounds in a few weeks with enormous community support.

The London Borough of Lewisham’s library service will continue to provide advice, training and access to books from its own collections and the London Libraries Consortium. Under-utilised space upstairs will be let as offices and deskspace to generate income for the building. Anchor tenants the Philosophy Foundation will be based there, alongside local creatives, freelancers and entrepreneurs.

Tara Cranswick, CEO of V22 said,
“In a city as glorious as London, and a community as active as Forest Hill, it makes perfect sense for neighbours to come together to save this vital piece of community infrastructure and to transform it into a unique resource. Although Lewisham has had to make difficult decisions due to funding constraints, the approach it is taking does seem to be positive and proactive.”
Head of Library Services for the London Borough of Lewisham, Antonio Rizzo, commented,
“What the Forest Hill community has achieved through the library building is remarkable for two reasons. It reaffirms the stake they have in this valued and much loved building and pushes the boundaries of what can be achieved when people come together. The Library Service is excited about the opportunities that this collaboration brings”.

Michael Abrahams is the chair of the Forest Hill Society and has lived in Forest Hill since 1979. Michael was the initial Chair of the Forest Hill Society and has chaired the group between 2006‐2008 and again since 2013, he is also a member of the Forest Hill Assembly Coordinating Group. Michael is a professional online Product Manager with 15 years’ experience in on‐line information systems.
"We have been delighted by the response from the community to this initiative, with lots of people volunteering to help make this a great community library. We are proud to be working with V22, with their experience of managing studios and listing buildings". - Michael Abrahams

Simon Higgs is co‐owner of The Archie Parker coffee shop on Dartmouth Road among other business ventures.  Simon is on the executive board of Forest Hill Traders’ Association and will be integral to setting up the day to day running of the new Forest Hill Community Library. We are delighted that an eminent local entrepreneur and businessman is willing to devote his time to making the community bid a success.

"You say the word 'library' to people and they understand, they know about closures and under-funding, of libraries being turned into glorified cafes and gyms. However, the people and businesses of Forest Hill have gone a step further than just knowing about the threat to our library, they have really rallied behind us and wanted to help, be it by volunteering or donating, everyone wishing they could do more; it is a contagious momentum, heart-warming and inspiring." - Simon Higgs

Pauline Wright is the owner of Sugar Mountain on Dartmouth Road, an executive member of Forest Hill Traders’ - "I am absolutely thrilled that our community partnership bid was the winning bid for our library.  All of us bring something different to our group and together I feel we make the perfect team to create something special for Forest Hill library. I am extremely excited about giving the local kids a voice in how we run the kids library and the input from them has been phenomenal. We are all very aware this is a tough task to take on but we are all very passionate and committed to this and are not taking it lightly!" - Pauline Wright

"I am delighted to be involved with this innovative community project. Libraries are gateways to learning and personal development. I am thrilled that the whole Forest Hill Community has come together to support the community library. The closure of our library would have left a gaping hole in our community. We plan to make this the best possible community library that we can; working directly with local residents we will plan services to strengthen and enhance our community. We passionately believe that a well-run and responsive community library is a powerful tool to help empower individuals and to raise the educational attainment and emotional wellbeing of our residents" - John Russell

Founded in 2007, The Foundation began working with 5 schools in Lewisham, but now conducts philosophical enquiries in over 40 schools around London on a weekly basis, reaching over 7,300 children every year, and working in a variety of settings including high-security prisons, hospitals and special educational needs schools.

In their capacity as the Library’s anchor tenant, The Philosophy Foundation will be ‘philosophers-in-residence’, renting office space on the premises, as well as running workshops and philosophy sessions for children and adults, and helping to create and look after the philosophy section of the library. This new specialist section will not only comprise academic philosophy books, but also popular philosophy books, and picture books for doing philosophy with children.

"Having worked in schools across Forest Hill for the past 13 years, we are really pleased to finally have a base in the community and are excited about the opportunities this will bring for introducing philosophy – and its benefits – to a wider audience." - Emma Worley, COO

Come and see some scary stories at Forest Hill Library, run by The Philosophy Foundation team.
They will tell some ghoulish tales and frightening fables, teasing out some thoughts from the children’s brains around questions like: what is courage? what is fear? how do we know things … and what is that knocking under the floorboards?
(Parents welcome, but must stay as silent as the grave)


Pumpkin Carving
at All Inn One - Saturday 29th - 12pm-2.30pm
Ideal for entry in the Sylvan Post Pumpkin Competition at 3:30pm (see below) 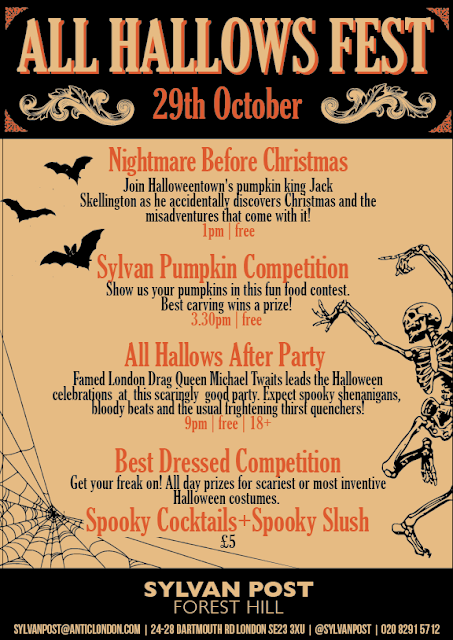 Farr and Wyde has opened in Dartmouth Road in the old B-Cards shop.  They promise an eclectic mix of old and new, vintage furniture and homewares sit alongside succulents, gifts and cards.

Waters Fishmonger and Greengrocer hasn't opened yet. But we couldn't wait to tell you that there will be a FISHMONGER and GREENGROCER set up in Perry Vale, just behind the station.

We wish all of these businesses well in their new ventures.
at Thursday, October 06, 2016 No comments:

This month ward assemblies will be voting on how to spend money in the local community. Competition this year has been greater than normal, so your vote counts for the projects that you would like to see in the local area. 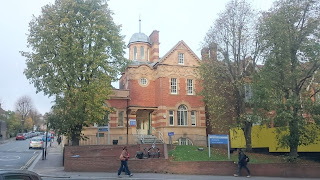 Forest Hill Library will be closing for two weeks, from 10th - 24th October for the transition to a Community Library. We already have over 100 volunteers interested in helping to keep the library open and thriving, but as we get closer to the opening we need something else - CASH!

As we transfer to community management we will need money for a range of expenses to ensure the library runs smoothly and can face the challenges ahead. So at this time we are asking for the community to help us raise money for the library with this crowd funding appeal. Please take a look at some of the great rewards available for pledging money, and helping to ensure the success of this community library.

The crowd funding site can be found at:
http://www.crowdfunder.co.uk/forest-hill-library-launch-fund
at Thursday, October 06, 2016 No comments: 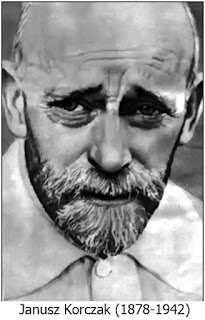 The Forest Hill Society is delighted to welcome Wojciech Lasota, Bartosz Pieliński and Julia Dmeńska from the Polish Korczak Foundation to talk to us about Janusz Korczak and his connection to Forest Hill. The event will take place at 5pm-7:30pm on Friday 21st October at Louise House (which Korczak visited 105 years ago).

Prior to this we will have a guided walk by Steve Grindlay from Horniman Museum, starting at 4:30pm and walking from the Horniman to Louise House, tracing the path of Korczak, and arriving in time for the formal talk.

We realise this is a slightly odd time for an event, this is due to the availability of the speaker. But we couldn't pass up this great opportunity to hear more about this amazing man, and his links to Forest Hill.
To find out more about Janusz Korczak see our previous article.

Autumn Walk in the Woods

Possibly have a nice lunch at the Woodhouse, before a walk in the woods starting at 2:30pm
at Thursday, October 06, 2016 No comments:

Planting at the Station - 15th October

We are delighted that for the fourth year, the Forest Hill Society have been judged 'Outstanding' by Royal Horticultural Society 'London In Bloom' competition.

But we really need some additional volunteers to help keep up the good work and make Forest Hill look lovely. So PLEASE put in your diary Saturday October 15th at 2.30pm to join us at Forest Hill Station to cut back, chop down, turn over and replant so that we are establishing a good base for next year.  Even if you can only spare half an hour it would make all the difference when combined with everyone else's half hour.
at Thursday, October 06, 2016 No comments: