Many thanks to everybody involved in planting the flowers around Forest Hill station over the last couple of weeks. We hope everybody enjoys the improvements this will make to the station forecourt and the station platforms. 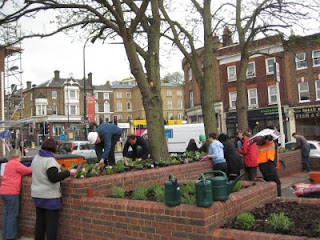 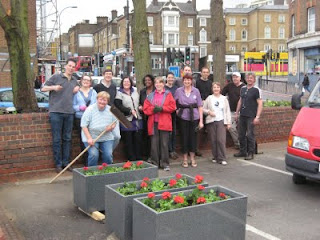 The Forest Hill Society in conjuction with the 'Sylvan Post' will be organising a celebration from 2-5pm at the old post office on Dartmouth Road.

From 2-5pm, on Friday 29th April, we will be holding a wedding party in and outside the Old Post Office. Antic (the owners) will be selling bottled beers/ciders and if a nice day set out a living room outside. Please bring food to share as well as friends & family and lets enjoy a day off in Forest Hill!

Fun activities for all:

Bunting provided by Messy Makers and Stag & Bow.
at Thursday, April 14, 2011 No comments:

The Forest Hill Society’s entry in the London in Bloom ‘It’s your neighbourhood’ category has been accepted. The Localities’ Fund award from Lewisham Council is agreed and dates are set.
Forest Hill station forecourt will be the centre of our attention – being the most visible point of entry and exit in our town, but with a leafleting and poster campaign in the offing, we hope to inspire individuals, shops and businesses to brighten up their homes, shops and premises with flowers.
The programme is: Saturday 9 April 10.00am – 1.00pm: work with volunteers from Nature’s Gym to help dig the existing beds.
Saturday 16 April from 2.30pm: All ages welcome to help with the replanting. If you join in, many hands will make light work of transforming the station forecourt into a thing of beauty. Forest Hill will bloom this year!
at Wednesday, April 13, 2011 No comments:

Bring something you no longer need…….

Take something you can put to good use!!


Tea, Coffee and homemade cakes for sale and the Nature Reserve will be open for visitors
at Friday, April 08, 2011 No comments:

In light of the recent media coverage of the NHS reforms, we thought it would be useful to hear the views of someone impacted by the changes. Penelope Jarrett, Forest Hill Society Member and a GP in Lewisham, is worried about the proposed NHS reforms and summarises her main arguments here. If you want to know where or how information was derived, please contact her via penelope@foresthillsociety.com.

The views expressed here are those of Dr Jarrett and not necessarily those of the Society.

The National Health Service was born in 1948, in the aftermath of the Second World War. A patchwork provision of charitable and private healthcare was nationalised so that healthcare would be free, available to all and of uniform quality no matter where people lived nor what their background. The service was run as a single system, administered by regional and district health authorities. The first big change came with the introduction of the internal market by the Conservative government in the 1990s. The service was split into “purchasers” of care and “providers” of care: the NHS was made to buy services from itself. At this time there was also an experiment with “GP fundholding”, where instead of the health authority purchasing services, GP practices could buy services for their patients.

The Labour Government after 2001 entrenched and extended the internal market. The Department of Health (DH) is not open about the figures, but the Health Select Committee has recently estimated that the transaction costs of the NHS have gone up from 5% of total NHS expenditure to 14% over the last 20 years in which this market has been operating. There is some evidence that fundholding allowed GPs to make some savings by lowering the demand for clinical services, but this was at the cost of higher managerial and transaction costs, and a substantial drop in patient satisfaction.

In 2000, the UK was spending just 6% of GDP on health. The Labour Government pledged to increase this up to the EU average of 8%, and spending went up from £35bn in 1997/98 to around £98bn in 2009/10 and will be £102bn in 2010/11. However, we still lag behind the Organisation of Economic Co-operation and Development (OECD) average, because expenditure has risen in other countries too.

This increased expenditure coincided with a number of other policies such as targets on waiting times, and evidence based policies such as the National Institute for Clinical Excellence (NICE, popular with clinicians) which saw patient satisfaction levels soar from a low of 35 % (quite or very satisfied) in 1997 to an all time high of 64% in 2009 (the latest reported survey). Politicians have commented how the NHS was not an issue during the election campaign of 2010, because people were generally happy.

Despite this, and despite the Conservative pre-election promise of “no top down reorganisation of the NHS”, Andrew Lansley is proposing reforms in the NHS which will be so big that they will be “visible from space” (according to David Nicholson, NHS Chief Executive).

The headlines have all been about GP commissioning, but this huge piece of legislation (288 clauses) changes all parts of the NHS. At the same time, there are White Papers proposing major changes to the Public Health Service, and to the training of doctors.

The government is committed to patient choice, any willing provider policies, competitive tendering, and the Secretary of State will have the power to create regulations to ensure that these happen.

The Bill is Unnecessary

Andrew Lansley and David Cameron have said that the Bill is necessary because outcomes in the NHS are not as good as in some other countries. This is true of the outcome they picked out (death rates after a heart attack are lower in France than in any other European Country), but you can pick out many figures in international comparisons, and easily find others in which the UK performs better than France. In fact, on trends since 1979, the UK rate of death after a heart attack will fall below the French rate by 2012.

Overall, life expectancy at birth in the UK in 2007 was 79.5 years, similar to most European Countries and slightly above the OECD average of 79.1 years. European countries have health care systems which are called insurance based, but they are all compulsory and to a great extent underwritten by Governments, which makes them effectively funded by taxation. The OECD country which has the most developed market and least socialised system is the United States. It stands out from the other countries in having a below average life expectancy of 78.1 years, and spending over $9,000 per capita to achieve this in 2007 while most other OECD countries spent $2,000-4,000 per capita. The UK spent about $3,000 per capita.

No-one would argue that the NHS is perfect. However, there are many existing examples of good practice and successful projects, some of which have been touted by the reformers as arguments for the reforms. It must be remembered that these projects have all taken place under the present legislative framework. Passage of the Bill is not necessary.

The Reforms will be Expensive

In the context of the current economic recession, it has already been recognised that health expenditure would be a problem. NHS chief executive David Nicholson’s 2008/09 annual report says the health service should expect to have to make ‘unprecedented’ efficiency savings of £15bn to £20bn between 2011 and 2014. He writes: ‘This is so that we can deal with changing demographics, the implementation of the [NHS next stage review strategic health authority] regional visions and cost pressures in the system.’ This has become known as “The Nicholson Challenge”. It means that although the Coalition have promised not to cut NHS spending in real terms, because there will be more older people, and healthcare inflation is more than consumer or retail inflation, £20bn has to be saved over the next 3 years, from a budget of about £300 bn.

The DH estimates that the proposed reforms will cost £1.3bn to implement. Independent academics have estimated it could easily cost as much as £3bn. This is on top of the £20bn of the Nicholson Challenge. And, as noted in the introduction, the more marketised a system is, the higher the transaction costs become.

The Reforms are Risky

The whole process is very risky: changing all the structures at once means that there will be no safety net if one of them fails. Indeed, in the market the expectation is that some consortia and hospitals WILL fail. The presumption is that other consortia or hospitals (or private providers) will take over the failing bodies, or they will close. Where will patient choice be in all this? Or indeed, any patient rights?

There are very many unanswered questions about how the proposed new bodies will be constituted, exactly which body will have which duty, and where lines of accountability will lie. This is going to be a difficulty for staff and patients alike. When there are problems, and there always are problems in healthcare delivery, it is likely that no-one will be accountable.

The process of GP commissioning carries inherent conflicts of interest, since GPs will be commissioning services which overlap with the services that they themselves provide. For example, a diabetic may be cared for at the GP surgery, or may be referred to hospital. This is even before one considers the problems when GPs set up companies to provide services such as physiotherapy, or minor injuries (which is already happening); or if GPs are rewarded for saving money on prescribing or referral budgets.

The Reforms will be Ineffective.

The proposed changes have not been tested nor piloted. There is some evidence to indicate what might happen e.g. what happened with fundholding, as described in the introduction. There is evidence from health economists to show that competition on price reduces quality. This happens in other markets too: we do not generally go to the Poundshop if we want good quality goods. The Government have backed off a little, and said that there would only be two tariffs for hospital procedures (a local and a national tariff). However, it has been estimated that 70% of NHS activity is not covered by the tariff system.

The Government’s vision is “to modernise the NHS so that it is built around patients, led by health professionals and focused on delivering world-class healthcare outcomes”. This sounds fine, but there is no evidence that the proposed changes will achieve this. The BMA commissioned Ipsos MORI to do a survey in January 2011. 1,645 doctors participated in this. A majority thought that enactment of the Bill would lead to increased competition (88%), which will lead to fragmentation of services (89%), reduce the quality of patient care (65%) and will damage NHS values (66%). They also thought that the reforms would increase health inequalities (66%). These concerns, and many others, were also articulated at the BMA Special Representative Meeting on 15th March. Over 400 doctors, representing medical staff throughout the UK, voted for motions criticising every aspect of the Bill, and agreeing to campaign against it..

So, it comes down to whom you believe: Lansley says it will work, the majority of doctors say it will not. If you are concerned about any of the proposals as well, you can email our MP dowdj@parliament.uk at any time.
at Wednesday, April 06, 2011 No comments: