Alistair Dey recalls Forest Hill’s pop and rock music heritage
The newly rebranded Signal pub in Devonshire Road, both now and in its various incarnations from The Railway Signal to The Hob, has a long and proud tradition as a venue for live music in Forest Hill. I have seen several bands there and this got me thinking about Forest Hill’s rock ‘n’ roll and pop music heritage.

The Capitol cinema (now the Capitol pub) on London Road was a venue for pop groups in the 1960s. But the premier venue for pop music in Forest Hill was the Glenlyn Ballroom at 15A Perry Vale. This later became Crystals Snooker Club and is now the JK Banqueting Suite. Many soon to be very famous names played there – including The Rolling Stones, The Who, The Kinks, The Yardbirds, Dusty Springfield and Cilla Black. The advertising flyer from probably December 1963 or 1964 (courtesy of SE23.com) shows the “star bands” lined up for the month.

The early 1960s group most famously associated with the Glenlyn  Forest Hill was probably The Who. I had long known that The Who had played regularly at the Glenlyn Ballroom. But an amazingly comprehensive (and presumably accurate) article in Wikipedia lists the 26 times The Who played at the Glenlyn in Forest Hill between 13 September 1963 and 29 June 1964. Most of that time, though, they were known as The Detours or The High Numbers before finally changing their name to The Who later in 1964.

In his 2012 autobiography, Pete Townshend of The Who says that in 1963 “our audience was mainly Mods. A few venues like the Notre Dame Church Hall in Soho and the Glenlyn Ballroom, Forest Hill were true Mod strongholds where fashion leaders, called Faces, displayed new outfits and dances like fashion models”.

Pete Townshend also tells the story how at the end of December 1963, The Who supported the Rolling Stones for the first time at a gig in Putney. From the side of the stage, Townshend watched them play and became an instant and life-long fan. As Keith Richards, the Stones guitarist, waited for the curtain to open he limbered up by swinging his arms like a windmill. A few weeks later The Who again supported the Rolling Stones, this time at the Glenlyn Ballroom and when Townshend noticed that Keith Richards did not use the windmill trick again, he decided to use it. Thus, Pete Townshend’s windmill swinging guitar threshing trademark was born in Forest Hill. 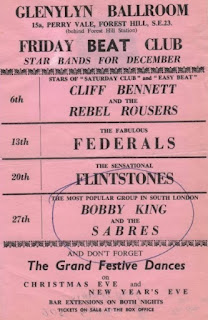 The Who played one last time at the Glenlyn Ballroom on 21 January 1966 after they had become famous and later dedicated their 1973 album Quadrophenia in part to the “kids of Forest Hill”.

The Who supported the Rolling Stones at least twice at the Glenlyn Ballroom. The Stones bass player was, of course, Bill Wyman, who would presumably have known Forest Hill quite well as he was born in Bell Green in 1936, just round the corner from the bottom of Perry Rise in the now demolished Miall Road which is now where Dillwyn Close and Miall Walk stand.

Forest Hill’s most famous rock ‘n’ roll son is Francis Rossi, guitarist and lead vocalist of Status Quo. Francis was born in Forest Hill in 1949 and attended Our Lady and St Philip Neri primary school in Forest Hill and then Sedgehill Secondary School in Bellingham. At Sedgehill he met Alan Lancaster (from Peckham) and formed a band in 1962 which, after going through various names and changes of personnel,  became Status Quo.

The Quo hold the record of more hit singles (62 between 1968 and 2010) than any other band in UK chart history. Their first hit was the quasi-psychedelic “Pictures of Matchstick Men” in 1968. They soon changed styles completely to become a denim-clad hard rock and boogie band. I was a great fan in the 1970s. They were musically fairly unadventurous perhaps, but hugely successful and satisfying and you knew exactly what you would get with a Status Quo single in their 1970s heyday.

For those with an interest in Forest Hill’s pop and rock music past there is some good stuff and reminiscences on the Transpontine and SE23.com websites.

Ah, I remember it well as a 16 year old teenage girl hanging around the mods and their amazing scooters and the regular line up of great bands. We'd shoot off late at night on the back of a Lambretta, no helmets of course in those days and never telling our parents where we'd been! I wonder if everyone looks back at their young teenage years with such great nostalgia as we do!