Where Did You Get That Hat?

This past Christmas our community was aflutter with the Forest Hill Hat Caper when not just one, but two of the handmade Santa hats for the Christmas tree were stolen. Local Forest Hill designer and resident Lee Jackson of Jackson Morgenstern Ltd created this fantastic feature. Jason Kee sat down with him to find out more about the designer behind the decorations, and the man under the hat. 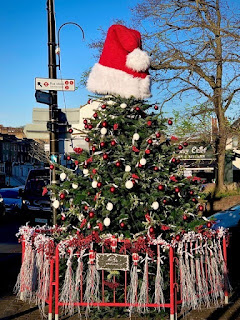 Now very much in demand, Lee didn’t start his career in design. His first foray was an extensive year-long refurbishment and redecoration of the house he shared with his then partner. It must have been a triumph as a friend then introduced him to the BBC. It was the 1990s and makeover programs were all the rage. Lee found instant success and began working on home makeovers for daytime magazine shows. He had no formal training, but he was creative, could do the work himself and was an excellent presenter, a rare combination for this new emerging TV format.

After the BBC, Lee started working with a growing number of interiors’ magazines and began to focus on styling rooms for photoshoots. There is a very good chance you have a feature in your house which Lee inspired. But the fortunes of TV home-décor shows and those glossy magazines waned. Lee set up Jackson Morgenstern Limited twelve years ago and has built a business focusing on exhibition design, and experiential and PR stunts. Stunts have included setting up a full-scale wedding for Bertie Bassett at the Bassett’s factory, and an ambush by Scottish Clansmen in Soho.

He said, “I love it most when I answer the phone and someone says: I’ve got a really bizarre request...” He has been asked to recreate a jungle and 1950s Cuba, and even to create an edible set. In an industry where burn-out is common, Lee attributes his success to keeping ahead of the curve, and embracing new technology and media.

Today, styling photo shoots accounts for a lot of his work and takes him all over the World. When we talked he was getting ready to head to Milan for two weeks. When he heard about the theft of the hat (the first time) he was in Tenerife. 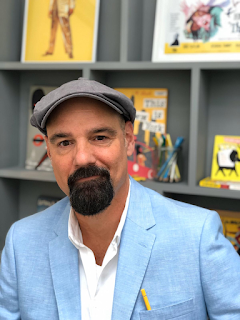 Lee became a Forest Hillbilly just over six years ago on a day his partner Alex is unlikely to let him forget: Valentine’s Day.

Lee is a native North Londoner, living in both Century Park and Watford before venturing south to SE23. Like many other recent arrivals, he knew very little about the area but was encouraged here by friends who live and work in Havelock Walk. In Forest Hill he found a converted sausage factory (or so he has been told) with room for a studio and a home for him and Alex. Lee speaks with great fondness now of Forest Hill though, from our chat, I suspect it is the cheese toasties from Aga’s Little Deli that keeps him in the ‘hood.

Over the past few years, Lee has also carved out a niche line of work in styling photo shoots and events for Christmas. For him, Christmas begins in May lasting often through to October. A few years ago at a photo shoot for Dobbies Garden Centres, he admitted to decorating over 1,500 trees — a number he now thinks was conservative. It should be no surprise that he has earned himself the title Mr. Christmas. Forest Hill was very lucky to have Lee not only design but also supply the decorations and make those two erstwhile hats for our Christmas Tree.