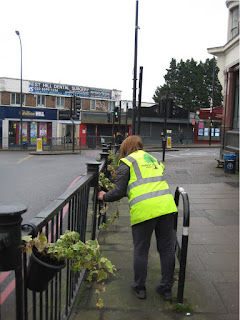 Pots against pollution
As a trial, in a further effort to mitigate against the pollution produced by traffic on the South Circular, Forest Hill Society volunteers have attached pots of trailing ivy to the railings near the former Barclays Bank in Forest Hill. These plants form the beginnings of a “green screen” in an effort to reduce the negative impact of vehicle emissions on people, and especially small children, using our roads. If the trial is successful similar pots will be attached to other railings around the traffic junction.

Cleaning — not just greening
The Forest Hill Society’s cleaning squad turned out in force on February 22nd to spruce up the subway. Sloshing suds and waving wipers, it didn’t take long to return the walls of the subway to whiter than white.