Have a Look at Havelock Walk 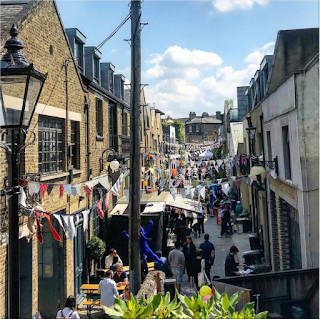 Havelock Walk is one of Forest Hill’s great treasures. It is a cobbled mews off London Road which is home to a diverse community of creative people, who all live and work there. Its small entrance off the South Circular gives little indication of the creative hub a few meters from our busy high street. It feels almost hidden despite the large blue and white Hello and Goodbye mural, by resident artist Supermundane.

Havelock Walk’s history is far from clear. Some suggest the name derives from the Have Lock, an offshoot of the Croydon Canal providing stables for the horses which pulled the barges. This may be more of an urban legend since there is no written evidence. Furthermore, the Croydon Canal closed twenty years before the first noted reference in 1862 to a Havelock Street on the site. Businesses then included a blacksmith, carpenter, coach-maker and zinc worker. It likely borrowed its name from the terrace of shops on London Road which now includes the Red Cross, then called Havelock Terrace. 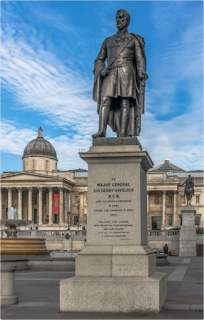 It is much more likely that Havelock Walk is named after Major-General Sir Henry Havelock, then considered a hero of the unsuccessful Indian Rebellion in 1857. Havelock died shortly after the end of the Rebellion; subsequently, streets, building and even pubs came to bear his name. Today, a statue of Havelock stands on one of Trafalgar Square’s plinths.
While once an area of industry, fast forward to the 1980s when Havelock Walk was a grim, cobbled terrace used by mechanics and metal workers for storage. It suffered bomb damage during the war and had remained unwanted. Yet, despite the squalor, it had something that Lancashire-born artist Jeff Lowe was looking for.

Jeff Lowe FRSS was a student of the New Generation of British sculptors in the 1960s which included Anthony Caro and William Tucker. Lowe came to prominence in the 1970s winning the Sainsbury Award in 1975 and today is internationally acclaimed for his monumental architectural-inspired abstract sculptures.

Lowe had been looking for cheap warehouse space in which he could work on his large abstract sculpture and make a home. Havelock Walk fit the bill, and in 1987 he bought his first unit followed by several more over the next ten years. Each one was converted into live/work studios and often sold on to other artists. As shells, their new owners could create the spaces they needed for both their professional work and personal needs.

Fast forward to today, and Havelock Walk is now home to a vast array of artists, sculptors, ceramicists, architects, photographers and craftspeople. They include Royal Academician David Mach, who is now one of the UK’s most successful and respected artists, and known for his large-scale sculpture, collages and installations. His 1989 installation Out of Order, of fallen red telephone boxes, dominates the centre of Kingston. Supermundane’s (aka Rob Lowe’s) geometric images and typography are instantly recognisable, playing with line, colour and optical illusions. Another resident is visual artist and mental health advocate Liz Atkin. Atkin’s work is in part a response to her  compulsive skin picking condition and she can often be found giving away work to passengers on the Overground. Resident photographers Wayne Parker and Lenka Rayn produce haunting landscapes (Parker) and portraits (Rayn) from their unit at the end of Havelock Walk.

In the 30-plus years since Jeff Lowe bought his first unit, Havelock Walk has become more than a street of live/work spaces. Havelock Walk is now a thriving community of artists, often collaborating with each other; and a community of families, many with children born and raised there.

Throughout the year, visits to studios are often by request only. But twice a year the studios’ doors are opened, and this creativity explodes onto the street with Havelock Walk’s popular Open Studio Weekends. Colourful bunting leads visitors to original art and crafts for sale, alongside street music, street food and the families of Havelock Walk.