From our foreign correspondent…

Goings-on from beyond the borders of SE23 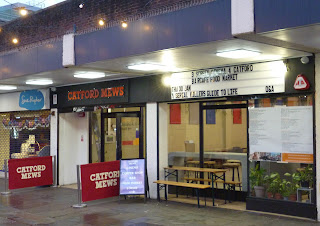 New Cinema in Catford
Catford has been cinema-less since the ABC closed in 2001 — but no longer! 2019 saw the opening of “Catford Mews”, an independently-run venue comprising a three-screen cinema, café, bar, five local food vendors and a community space.
Located in the shopping precinct off Rushey Green, the cinema is open seven days a week with screenings throughout the day. It shows both the latest releases and independent films, and also hosts comedy nights, live music and the occasional live theatre broadcast.

Film ticket prices are under £10 and there are various membership packages entitling members to free tickets, discounts on further tickets, and 10% off food and drink.