In March 2022, Mayor of London, Sadiq Khan came to Forest Hill to visit Forest Hill Secondary School and announced his proposal to extend the Ultra-Low Emissions Zone (ULEZ) from the south and north circular roads to include all of Greater London. 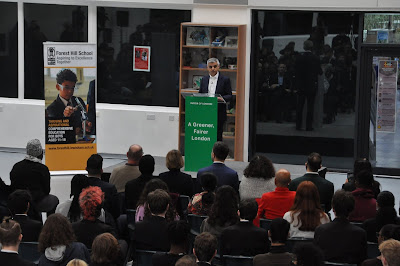 Back in 2018, when the mayor was consulting about the ULEZ that came into effect in October 2021, at that time the Forest Hill Society responded to the consultation with one clear message: “Recognising the need for action to combat poor air quality, the Society would support a larger ULEZ, extending even to the full extent of Greater London.”

This proposal is particularly good news for South London and for Forest Hill. The south circular is much closer to the centre of London than the north circular. While the boundary in North London is a large duel-carriageway, the south circular is a more modest road that goes right through the heart of communities − as Forest Hill residents know only too well.

By extending the ULEZ to the whole of Greater London, there will be less pollution for miles beyond the South circular and this will hopefully have a positive impact on the health of local residents.

The proposed timescale is ‘end of 2023’, after which time drivers with more polluting vehicles will be charged £12.50 to drive anywhere in Great London – the same charge already applies to vehicles within the current ULEZ.

The Forest Hill Society welcomes this initiative and is delighted that the mayor chose Forest Hill as the place to launch this proposal.