In December 2021 London City Airport presented to their Consultative Committee a set of completely new route options for their arrivals and departures over London. They shared detailed mapping of five potential alternatives for arrivals and departures but made it very clear that these were outline only. Before taking these to the next stage of the regulated process they asked Committee attendees to comment on these initial ideas.

In early March the airport gave us an early indication of the major points they are taking from the "27 Committee" and stakeholder responses received. They said that stakeholders favoured:-
-    The sharing of routes to provide respite
-    Planes to be kept higher for longer
-    A reduction in fuel and climate emissions
-    A separation of routes so that, wherever possible, the same area was not overflown by planes from different airports
-    Collaboration with other airports.

It will remain to be seen how the airport takes this feedback and translates it into new concentrated flight paths that will give us fair distribution of paths and associated noise from London City and Heathrow, two airports only 22 miles apart with runways pointing directly towards each other. We are particularly concerned that London City is proceeding to plan its own routes with no reference to Heathrow, when it seems obvious that they must develop plans together from the earliest stages.

The interlinking of Heathrow and London City low altitude routes over us is shown in the map below:-

Heathrow westerly arrivals cross the London City concentrated flight path at multiple points over SE London, from Dulwich/Brixton in the west and at least as far as Eltham in the east. Source flightradar24 We have published our full response to the airport here in the interests of sharing locally and in full the general concerns that we have. We have shared this with Environmental Health management at Lewisham and with MPs Ellie Reeves and Janet Daby. To summarise, we covered the following:-

1.    We welcomed that the airport seems to making some effort to understand the issues mentioned above. We expressed a major concern though, that designs seem to be being drafted independently of Heathrow, in the process compressing London City paths into a vertical and geographical space that reduces options for London City departure and arrivals routes and also climbing and descent angles. We believe that a publicly transparent dialogue at an early stage with Heathrow on the joint problems to be solved will enhance public confidence in the processes.

3.    We asked that the unpopular single concentrated arrivals route low over SE London introduced in 2016 be addressed, potentially introducing alternative or ‘respite’ routes. Over Lewisham, a respite route might look like that shown below, to spread or alternate the arriving air traffic. 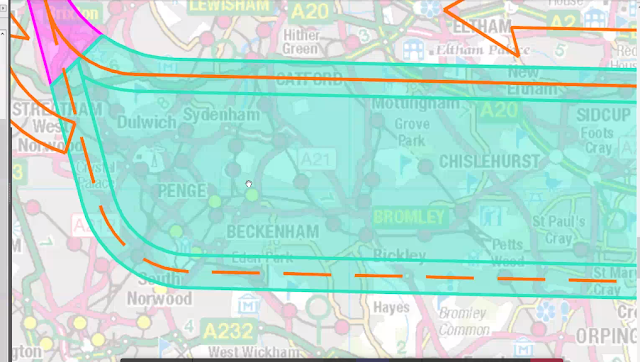 4.     4.    We pushed hard for a steeper approach route over SE London using a Continuous Descent Approach (CDA). Currently arrivals are in almost level low altitude flight from Dartford and then west across SE London. Air Navigation Guidance says CDA is best practice for all airports, yet London City does not practice it.
5.    Air Navigation Guidance also requires that the height of hills is taken into account. With our highest point near Horniman Gardens at 345 ft, City planes are sometimes only 1255 ft above residents in the Tewkesbury Estate. London City does not yet seem to be taking our hilly terrain into account in their route planning.
6.    Finally, both Heathrow and London City have adopted similar route design principles, after consulting with overflown resident groups from across the city.

Heathrow: - ‘avoid overflying the same communities with multiple routes including those to/from other airports’ (draft Nov 2021)

We asked for early and public evidence that the two Airports are collaborating with each other on three-dimensional airspace design over London, and that they begin with a shared understanding of the impact not only of their individual but also their combined operations in different wind directions.

Finally, we said that only a complex overlay and creation of a very clear explanation of the joint noise and environmental impact on the ground of proposed plans will enable meaningful respite route planning and enable those on the ground - Local Authorities and public - to respond to flight path consultations in an informed way.

It looks as though public consultations will begin in 2023. But meanwhile we continue to try and influence the two airports and encourage them to be transparent in public engagement and consultation while they make plans and submit them to the Civil Aviation Authority.