Born in Deptford in 1890, Leslie Eveleigh was one of the early silent film makers whose names have largely slipped into obscurity, but who still retain an important place in the history of British cinema. Eveleigh lived and died in Forest Hill and is buried in Brockley cemetery.

Eveleigh’s life is not well documented, although it is known that he served in the Royal Flying Corps during the First World War. His film career is best traced through the BFI historical archives. There, his first film credit dates from 1913, where he is listed as a cameraman on Sixty Years a Queen, a dramatised version of the life of Queen Victoria, based on the book of the same name by Sir Herbert Maxwell.  The film was made at Ealing Studios, which had been founded in 1902, and was directed by Bert Haldane, who made over 170 films in his short 10 year career. In 1915 Eveleigh is again found working with Haldane as photographer, this time on Jane Shore, another of the hugely popular historical dramas which were the mainstay of this early film industry. Jane Shore is notable for its scale − probably the first ‘epic’ British film, it used thousands of extras in its crowd scenes, and has been compared to D.W. Griffith’s Birth of a Nation in its scope and ambition.

Although Ealing, Elstree and Pinewood are considered the hub of the British film industry, once Paul and Acres had made the first British 35mm film in 1895, studios began to appear all over the country, as creative talents sought to exploit the wonders of this new technology. From the creation of Gaumont in 1898 to the onset of the talking picture in 1929, many studios briefly flourished, then disappeared, as a combination of rising costs and the expansion of Hollywood meant that only the largest − such as MGM or Rank − continued to enjoy success. Of the 640 production companies registered from 1925 to 1936, only 20 remained in 1937.

One of these short-lived companies was British Filmcraft, which was founded in 1926 by Eveleigh and the film producer George Banfield, along with cameramen Bert Ford and Phil Ross. They took over Walthamstow Studios and operated from there until 1931.  Interestingly, their predecessors at Wood Street, Broadwest, also used studios at Southend Hall in Catford, located at what is now the junction between Bromley Road and Whitefoot Lane.

With British Filmcraft, Eveleigh was elevated to director, sharing duties with Banfield on a number of productions through the second half of the 1920s. Although the company made only a few feature-length films, they made numerous short films and serials, including six films featuring the detective Sexton Blake, and a further series on the life of Dick Turpin, filmed on location in Epping Forest.

Perhaps his best known work is a 20 minute short film, The Lady Godiva (1928), based on Tennyson’s poem. Thanks to the work of the BFI archive, a restored version of this is available, the story filmed on location in the historic medieval centre of Coventry, later destroyed during the Blitz, and starring Gladys Jennings as Lady Godiva. 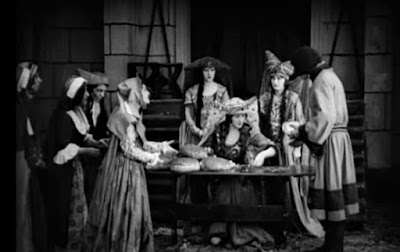 The advent of the talkie, Hitchcock’s Blackmail (1929) usually considered the first British example, sounded the death knell for many silent film-makers. British Filmcraft’s last production (and Banfield’s last film) was made in 1930, and Eveleigh has only one further final film credit, an advertising documentary for the manufacturer Mabie Todd & Co., Making a Swan Pen in 1940, released after his death.

As a young man, Eveleigh had married Nellie Evit in Thatcham in 1913. He is recorded as living in Kentish Town in 1930, but they subsequently settled in Forest Hill, at 6 Woodcombe Crescent. In a rather macabre turn of events, however, Eveleigh met an unfortunate end by his own hand, aged just 49. The Birmingham Mail of 4 December 1939 reported that Sydenham police had received a hand-written letter from him containing a garage key. When the local sergeant attended the scene, he found Eveleigh kneeling behind his car, with the exhaust and his head both covered by a mackintosh. The ignition was on but the engine was no longer running. The death of his wife just a few months earlier appeared to have led to his suicide, and the coroner ruled that he took his own life while the balance of his mind was affected by ill-health.

Thanks to Mike Guilfoyle from the Friends of Brockley & Ladywell cemeteries for alerting me to this story. Mike has recorded a series of fascinating podcasts on other cemetery residents (including Louis Drysdale) which can be found here:
https://tinyurl.com/london-epitaphs 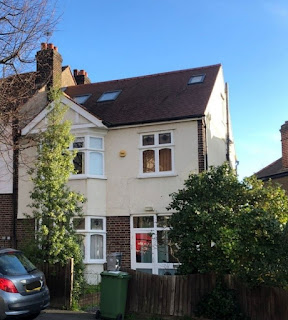 6 Woodcombe Crescent (photo by May Teo)