The Ultra Low Emissions Zone – What Does it mean for Forest Hill?

Transport for London (TfL) currently has plans in place to implement an ‘Ultra Low Emissions Zone’ (ULEZ) in Central London by 2020. This would require all motorised vehicles entering the current Congestion Charging Zone to meet exhaust emission standards or pay a daily charge.

Following the election of Sadiq Khan as Mayor of London, TfL has been consulting on both bringing forward the ULEZ plans and widening them to cover a much broader area of London. This is in response to growing concern over the effects of air quality on the health of Londoners. Many parts of London — including the South Circular where it passes through Forest Hill, Sydenham Road and the whole northern half of the London Borough of Lewisham — currently fail to meet legal limits for air pollution, most notably nitrogen dioxide and fine particulate matter. The pollutants come from many sources, but the dominant one is motor vehicle engines, especially those which are diesel-fuelled. The legal limits are based on research into the health effects of air pollution, and failing to meet them is causing thousands of premature deaths in London each year.

Last summer TfL completed a consultation on initial ideas for the ULEZ. There were over 15,000 respondents, a significant majority of whom supported greater action on air quality. More recently, TfL has recently concluded a second phase of consultation in order to start the statutory process required to change the initial ULEZ plans. The proposals included:

For residents and businesses in Forest Hill, the impacts could be felt as early as next year if you drive into Central London and have an older vehicle. Those purchasing new vehicles in the foreseeable future, whether for business or personal use, might also be wise to pay heed to the emissions requirements in order to avoid incurring costs associated with the ULEZ. However, most impacts will be felt only when the ULEZ comes into force. If your vehicle doesn’t meet the required standards you will have to pay each day you drive into the area bounded by the North and South Circular roads; those living or having businesses inside this area may also have to pay a daily charge if their vehicle does not meet the required standards — even if it’s not driven each day.

While that may sound onerous, the rationale behind adopting the ULEZ should not be forgotten. The plans will no doubt drive investment in cleaner vehicles across London, both by businesses and private owners, including in areas which are not directly affected. The result of this will be cleaner air for all Londoners and, hopefully, a fall in the number of people whose lives are tragically cut short by air pollution. 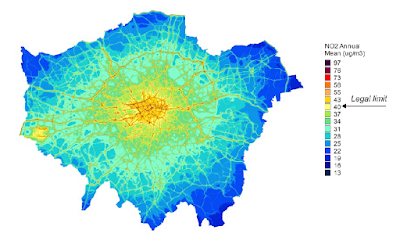 Above: Concentrations of annual average NO2 (Source: LAEI 2013)
Below: Proposed boundary of ULEZ on the North/South circular roads 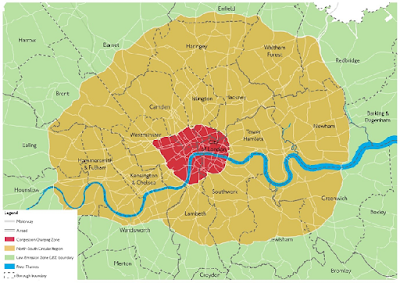