We all love Forest Hill, but we do occasionally need to leave and that’s when it’s helpful to have good train services and road links. The Society’s Transport Committee is extremely busy at the moment as it grapples with the coming of the Overground, road improvements and car parking.
East London Line Overground (ELL)
Test trains are already running through Forest Hill and we are pretty confident that services from Crystal Palace and West Croydon will start on May 23rd. The new services will provide a significant increase in capacity with eight ELL trains per hour in each direction. The big question remains as to how many people will actually want to use the new trains to go to Canada Water, Shoreditch High Street or to the delights of Dalston Junction.
Trains 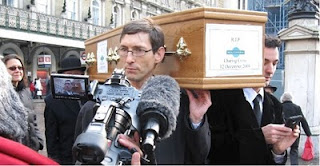 We have been campaigning against the reduction of train services to London Bridge from the present 6 trains an hour to four trains an hour from the date of the opening of the ELL. The only exception will be during the morning peak when there will be six trains an hour to London Bridge. Our efforts resulted in an adjournment debate in the House of Commons on 5th February when our MP, Jim Dowd, made a lengthy speech about train services in the area. He told MPs that members of the Forest Hill Society wanted to know why the ELL should not be reduced rather than the service to London Bridge until it becomes evident that there is a greater demand for services on the ELL.
Despite Jim’s actions, it seems probable that the new timetable will come into force as planned.
The direct service to Charing Cross ended before Christmas in spite of our campaign to save it. We marked the event by staging a mock funeral on the final day of services to the West End. This received considerable press coverage and a spot on the evening TV news.
Problems with the introduction of Oyster are too complex to go into here – suffice it to say that the Society has been meeting TfL and London Overground Rail Ltd (LOROL) to try to get them resolved as soon as possible. We have also lobbied successfully to keep the exit from Forest Hill Station onto Perry Vale open whenever trains are running.
Roads
We have been contributing to a study initiated by the Perry Vale Assembly to look at traffic and pedestrian issues in Perry Vale and Perry Rise. This has included walking the street with consultants and a film crew looking at all the potential trouble spots. The consultants will be reporting back and debating the issues at a couple of public meetings.
Car Parking
We are pleased to report that as a result of pressure from the Society and others, the Council has reached agreement with Sainsbury’s to provide two hours of free parking in the Pearcefield Road car park which should encourage people to do more shopping in Forest Hill. We are pressing for better signage to Forest Hill car parks with signs that emphasise the free parking period rather than the fact that they are Pay and Display.
If you have any transport or road related issues that you would like the Society to take up on your behalf, please email Andrew.
at Tuesday, March 09, 2010