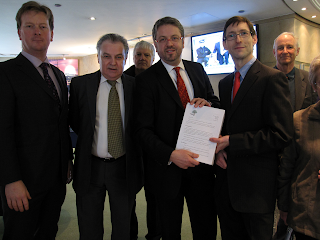 The Forest Hill Society has presented a petition containing 5594 signatures to Chris Mole MP, Parliamentary Undersecretary of State at the Department for Transport.

Commuters on the Sydenham line are protesting further cuts in their service to London Bridge when the East London Line starts operation on 23 May 2010. Having already seen their morning services reduced from eight to six trains an hour in December 2008 and the cessation of direct services to Charing Cross in December 2009, they face the prospect of a further cut in capacity in May when the afternoon peak service is reduced from six to four trains an hour.

The petition, which was collected by members of various civic societies along the Sydenham line, called on the Department of Transport to maintain the current level of service through Forest Hill and restore the evening service to Charing Cross. When pressed on the matter Mr Mole was unable to confirm when any review would take place, nor when the December timetable would be drafted. However, he did take on board the point that we required leadership from the DfT to resolve the pathways to Charing Cross. A copy of the covering letter presented with the petition can be downloaded from here.

Jim Dowd MP, Caroline Pidgeon AM and Councillors Alex Feakes, John Russell and Phillip Peake joined some of the petitioners at the presentation.