The 2020 Tokyo Olympics, held over to 2021 due to the Covid-19 pandemic, will be especially memorable for each of the Team GB medal winners, who between them secured 65 medals, including 22 golds. 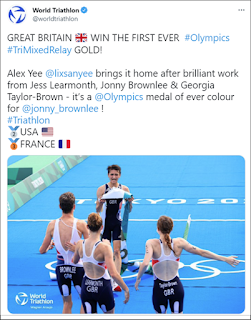 And for Forest Hill, these games will also be remembered as the first gold medal for one of our local athletes. Alex Yee followed his silver medal in the triathlon by anchoring the mixed relay team — also comprising Jessica Learmonth, Jonny Brownlee and Georgia Taylor-Brown — and obtaining the gold medal. Although Alex grew up close by in Brockley, he attended Stillness Infant School, so here in SE23 we can claim at least part of him as one of our own.

The 23-year-old first attracted attention when he won the 2012 Mini London Marathon and took gold for Lewisham in the London Youth Games, where he competed in cycling and the aquathlon. He recovered from a serious cycling injury in 2017 and began competing in the triathlon in 2019, finishing second in his first event, and winning his first World Triathlon Championship Series in Leeds earlier this year.

Local artist Lionel Stanhope was also quick off the mark, commemorating Alex’s success with an addition to his Brockley sign: 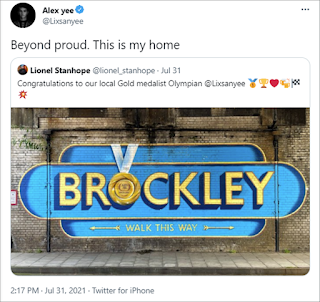 There are few past Olympians from Forest Hill, and we have to look to our neighbours to bask in their reflected glory:

Tasha Danvers attended Sydenham Girls’ School. A finalist at Sydney in 2000, she won bronze in the 400m hurdles at Beijing in 2008.

Duncan Goodhew lived at Wells Park Road in Sydenham during the 1980s. He famously won gold in the 100m breaststroke and bronze in the 4x100m medley relay at Moscow in 1980.

Linda Ludgrove lived on the Sydenham Hill Estate, and took part in the 4x100m relay and the 100m backstroke at Tokyo in 1964. Linda also won 5 gold medals and 1 silver at the Commonwealth Games of 1962 and 1966. 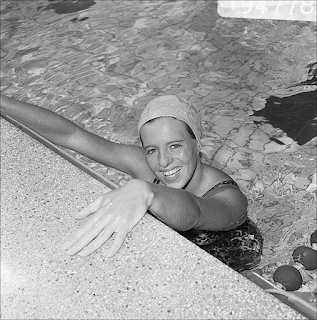 
Victor Gauntlett was born in Forest Hill in 1884, but after his family emigrated, he represented South Africa in the 1908 London Olympics, playing in the men's singles and reaching the quarter finals of the men’s doubles.

Richard Barnett was born in Forest Hill in 1863 and finished fourth in the Men's Free Rifle 1,000 yards in the 1908 London Olympics. He later served as the MP for St Pancras South West.

These, and other Lewisham Olympians, are recorded in the London 2012 legacy website,
http://lewishamlegacy.wikidot.com/lewisham-s-olympic-heroes