Forest Hill station forecourt
General chasing — no, not a little-known military personage, but what has been happening over the last few months, which resulted in a meeting of interested parties (but without a representative of the Forest Hill Society) being held at the station the last week of July. It seems things are beginning to move in the right direction regarding the partial closure of the Forest Hill station car park. If finally approved this will mean a trial closure of the WH Smith side of the car park to allow pedestrians safe access, unimpeded by vehicle movements, with the hope that, if the trial goes without incident, we can then have permanent closure. In anticipation of positive action, we have applied for small grant funding from Lewisham’s Creative Change Fund to be ready to transform the area into a ‘parklet’ as soon as the go-ahead is given — with any luck later this year.

Good news, too, that following a complaint made in September 2020 (which apparently ‘went off the radar’) the collapsed wall in the forecourt next to the pavement is now on the books to be repaired. There is no news, however, on the repair or removal of the hulking loo despite representations to Lewisham Council. 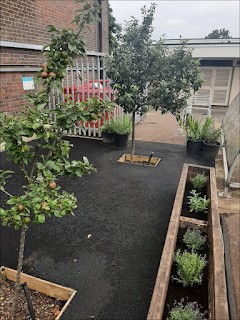 The return of the plant life!
Weather-wise the extremes of hot, then wet, then hot, then wet again throughout spring and early summer have really stimulated plant growth this year, as can be seen in the luxurious greenery in parks, gardens and planters across Forest Hill.

But at Forest Hill station, two days before the judge came to inspect for the Royal Horticultural Society’s ‘It’s Your Neighbourhood’ competition, the white rose overhanging the underpass had reached record measurements, the ‘danger’ hydrangea was in massive full bloom — and then they were cut down and removed, along with all the herbs in the herb container, when a decision was made by some unknown person that in order to tarmac the garden area on platform 1 ‘to relieve the rat problem’ all the plants should be destroyed.

An apology from Arriva for the removal of the plants which we had provided has been received by the Forest Hill Society, and some monetary compensation offered. Undeterred, as the picture below shows, volunteers have already been at work to regreen the area. Small planters have been replaced, the large herb container refilled, and as soon as new planters arrive, they too will be restocked. Meanwhile our wheelbarrow has been stolen from the platform 1 ‘secure’ gated area which had been left unlocked! 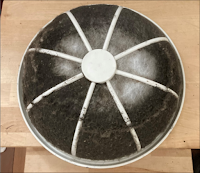 Clean air?
Have you ever wondered what the air in your neighbourhood contains? This picture was taken following the annual change of a filter in an air intake sited in the second floor flat of Frobisher Court, some 50 metres from Sydenham Rise — and opposite a park. Imagine what the air quality for someone actually living on the south circular road is!

Can you help?
Volunteers are always needed to support for the Forest Hill Society’s environmental work whether with our planting efforts, litter picking, adding street trees to our area, or to join in our campaigns to protect Forest Hill’s green spaces. Our work towards improving our air quality and our environment generally will continue in 2021 and 2022. No previous experience is needed, so please contact quetta @ foresthillsociety.com.