Thursday the 6th June was an inspirational day for members of the Forest Hill Society, who joined our local MP, Ellie Reeves, for a tour of the Houses of Parliament.

It was a sunny, balmy evening and, once through security, we entered the grand building’s interior. Funnily enough, the first stop was the gift shop! (Surely it should be ‘exit via the gift shop’?) Many of us purchased something, including some of their excellent whisky. 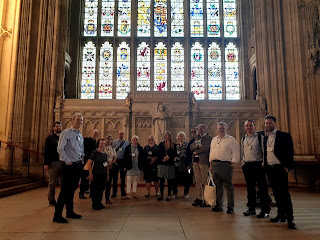 We met up with Ellie in Westminster Hall, a vast and imposing building which, interestingly, is the oldest building on the Parliamentary estate. It has a magnificent hammer-beam roof which was commissioned in 1393 and is the oldest example of such a roof in Europe. On the floor were plaques which signify who has lain in state in the hall with details of their dates, the most recent one being for the Queen Mother in 2002. There were also plaques celebrating events which took place in the Hall, such as historic addresses by famous visitors such as Barack Obama, Nelson Mandela and Pope Benedict XVI.

Ellie also pointed out the Hall’s statues and other important aspects, and told an interesting story of how some suffragettes in 1909 handcuffed themselves to the statues. One particular statue — of Viscount Falkland — was damaged by Margery Humes, who handcuffed herself to the spur on his statue! No charges were brought, but the same statue was damaged many years later when school children managed to break its sword.

We were very impressed with a modern installation at the far end of the Hall called “New Dawn”, created by artist Mary Branson. This is a spectacular glass, metal and light sculpture which marked the 150-year anniversary in 2016 of philosopher and MP John Stuart Mill having presented a petition to Parliament calling for votes for women. It was designed in the colours of the suffragette movement and its lighting changes over a twelve-hour cycle, governed by the ebb and flow of the Thames.

Once we left Westminster Hall, we entered Central Lobby — a bustling and busy interchange at the core of the building where members of both houses can meet, MPs can meet their constituents and where you can lobby your MP. There are beautiful mosaics above each of the four exits depicting the patron saints of the four constituent countries of the UK, and there is even a working post office! This Lobby is also the place you see in televised news broadcasts when MPs are interviewed inside Parliament.

Our next stop was the Members’ Lobby, which was designed to be a working anteroom to the House of Commons Chamber, where we saw statues of past Prime Ministers. There weren't any statues on display which were more recent than a bust of John Major, but there are portraits planned for the more recent Prime Ministers. The 2007 bronze statue of Margaret Thatcher was imposing, if not scary, as she is portrayed with her arm outstretched and posed as if addressing the House. She seemed to dominate the room! She is famously quoted as saying, “I might have preferred iron (a reference to the iron lady), but bronze will do.” We then moved to the Commons Chamber via the Churchill Arch.

While the Commons Chamber is probably very familiar to everyone from televised debates, it still gave us all a “Wow!” moment when we entered it via one of the two voting corridors, where MPs, when voting or discussing an amendment, have to queue up to register their votes. Ellie explained the process for voting and it did seem to be quite a tedious process. The Chamber was impressive with its familiar green seating, tiered benches, Speaker’s chair and central debating area. Interestingly, there still remains, delineated on the floor, a distance between the Government and the Opposition of 3.96 metres (13 ft). This is equivalent to the length of two outstretched swords, and was marked so that members could not lunge at each other. It is purely symbolic, of course, especially as weapons have been banned in the Chamber for hundreds of years!

Ellie pointed out a significant, recently placed plaque in the memory of Jo Cox, the murdered MP.

We stayed in the Commons Chamber for the remaining time we had on our tour, asking Ellie questions about parliamentary procedures, changes and updates; and what the life of a modern MP is actually like in very interesting and challenging times.

It was a fascinating visit, and one which afforded us a glimpse of what it’s really like to be an active and passionate MP, as Ellie Reeves obviously is. Many thanks to Forest Hill Executive member Paul Corley for organizing it!

If you get a chance to visit the Houses of Parliament, please go as it’s a beautiful, inspirational building, steeped in history.