London is in Bloom!
Here, in the Forest Hill Society, we are playing our part in making London bloom in our town centre — especially on Forest Hill station's forecourt and platforms — as we enter for our seventh year in the RHS’s London in Bloom “It’s Your Neighbourhood” challenge. Judging day was on the 9th July, so we are keeping our fingers crossed for another “Outstanding” award.

This year, as part of London Underground/Overground’s “100 years ... celebrating our heritage” theme, our team of green-fingered volunteers has endeavoured to recreate the London Underground roundel with red, white and blue petunias in one planter on each of the platforms; and each planter displays a small placard depicting Forest Hill station in the past, contrasted with our modern-day station. Flowers in the platforms’ other planters are designed to reflect Overground’s roundel in orange, white and blue colours. These colours are repeated in the main entrance’s planters. 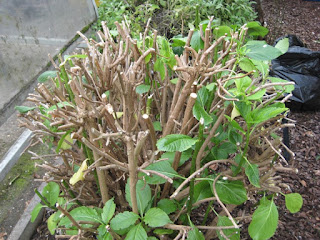 Hydrangea Danger!
For rail commuters who were wondering what happened to the magnificent pink Hydrangea which was in full bloom behind the bike shelter on Platform 1 of the station: one of our volunteers saw a railway employee hacking it down … two days before our judging day! He was told that it was a security risk as “someone could be hiding behind it doing something they shouldn’t” — as opposed to any of the other areas on the platform where hiding to do “things” could be done. Poor Hydrangea flowers … gone, but not forgotten.

Greening the Streets
Outside the Sylvan Post pub on Dartmouth Road, with contributions from the Ward Assembly and the pub, we have added aromatic herb planters between the groups of seats which were positioned on the road’s recently improved pavements, thereby adding yet another element to our town centre’s carbon-capturing planting. 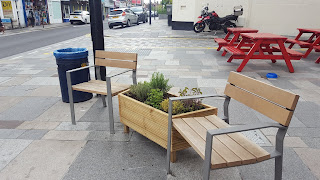 Working with Street Trees for Living, spaces have been identified for 50 trees on pavements on our stretch of the South Circular as well as for 32 trees to be planted elsewhere on grass. These proposed sites include the area near WHSmith, where a permanent Christmas tree would be planted instead of the temporary one. The proposals have been forwarded to Transport for London for consideration under their street trees scheme and we await their approval for installation of at least some of these trees.

Trees, as we are becoming increasingly aware, are good for us — and birds, bees and other insects — by not only absorbing pollutants but also by exhaling oxygen to create purer air.

Help is always needed …
With more volunteers, the efforts of the Environment Committee could be expanded. If you have ideas of ways in which we could do more, and would like to help us achieve them, please join us and let us hear your views.