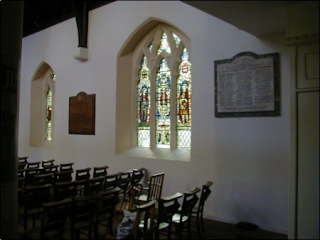 After the recent building works and refurbishment of Christchurch Chapel at St. George’s Church on Church Rise/South Road, its marble War Memorial was sadly not re-installed. The church aims to re-install the memorial, with a Service of Remembrance in November 2018. This would be an ideal time to bring it back into prominence as a significant memorial to the sixty-eight names it records.

Among the names listed are poignant reminders of the loss of life: twin brothers; near neighbours; brothers; only sons. Some names can be traced and their addresses known, but others are a mystery. Perhaps a married sister wanted to commemorate a brother. Perhaps a fiancée, whose lover never returned to marry her. One young man was awarded both the DCM and the VC; another, who had emigrated to Canada from Forest Hill, the DCM.

Do you know of any family members who were commemorated on this memorial and can you trace their stories? Please contact Janet Killeen via parish.office [at] stgeorgeandstmichael.org.uk.