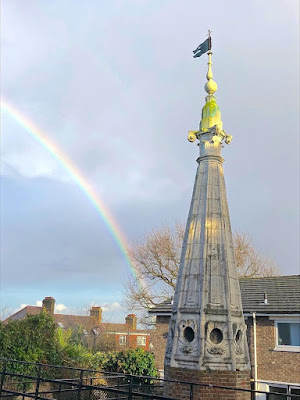 In a little-visited corner of town but close to Forest Hill Library, a magnificent church spire surprisingly emerges as if springing from the ground below, encircled by a cul-de sac of modest modern town houses just off Round Hill.


My children, when they were young, were convinced it remained the only visible part of a large church buried below by a catastrophic mudslide, due to the deforestation of the top of Forest Hill. (I confess they may at least have not been discouraged from reaching this conclusion in order to foster respect for trees.) The truth is barely less astonishing: It is in fact the 330-year-old spire of a City church built by Sir Christopher Wren after the Great Fire of London in 1666!

St Antholin’s Church was rebuilt after the Great Fire to Wren’s designs in Budge Row in the City and completed around 1682, at the huge expense of £5,700. The spire was particularly notable in that it was the only one cut from stone among 51 churches rebuilt by the famous architect. (Others of the time were timber-framed and variously clad such as with tile or lead.)

In the early 1800s, George Godwin stated, of the tower and spire, that "although they might not be termed beautiful or pure, display great powers of invention, and are of pleasing proportions" noting its clever octagonal and ribbed design with round shell openings at the base. He was less impressed by the composite Italian capital topping which he felt was too formal for such an ingenious design.

Reputedly, in 1829 the spire was damaged by lightning and had to be replaced, although there is some contention that the stone was too heavy for the tower and was likely to have been of more traditional construction and had become unstable.  One of the church wardens, Robert Harrild, purchased the upper section of the spire for £5 to save it from destruction.

Harrild had business premises nearby and presumably developed a great affection for the building. He was the owner of a printing works and became a pioneer in the manufacture and sale of printing machinery, developing the use of composite rollers instead of hand-held balls to apply the ink.

He became very wealthy and purchased Round Hill House, a grand manor house in Sydenham, to which he had the spire transported and re-erected in his gardens. The date is the subject of speculation, but it was known to have made its way to and been erected at Round Hill by 1850, where it stands to this day.

Harrild’s daughter Mary married another famous local resident, George Baxter the engraver and printmaker, who lived at The Retreat in Peak Hill and after whom Baxter Field is named.  The families were very close and Baxter’s sister married Harrild’s eldest son and heir. Harrild died in 1853, but the business continued under his sons until 1949.

St Antholin’s Church was demolished in 1875 to make way for the construction of Queen Victoria Street, but a memorial stone tablet depicting the famous spire still exists nearby at St Mary Aldermary, Watling Street, having been re-sited from Budge Row, which also no longer exists.

Round Hill House became The Sydenham and Forest Hill Social Club in the 1930s and was subsequently demolished in the ’60s, making way for the town houses we see today; but the spire survived, perched loftily on a brick plinth and complete with a ball and wolf’s head weathervane, along with a stately old Cedar of Lebanon tree from the original garden, both standing incongruously in the middle of the close.

Sadly, there is currently justified concern for the future of the spire which on my recent visit now looks in a very sorry state — surrounded by plastic orange barriers, boundary walls and railings that are crumbling away, sprouting weeds and the absence of a plaque or inscription denoting its significance. The spire is Grade ll listed by Historic England and we are expecting them to make a survey visit soon to report on its condition, hopefully as a first step towards its restoration.

With funds for public works of any kind in short supply, how nice and appropriate it would be if a wealthy local business owner — a Robert Harrild of today — stepped forward to earn our respect and help provide the ‘TLC’ that this unusual local heritage asset needs?
at Thursday, March 08, 2018