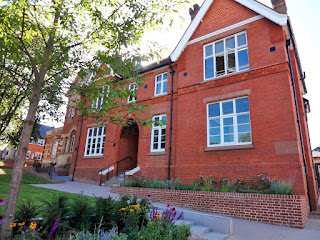 By Tara Cranswick, Director of V22
In 2013, V22 was proud to have won the tender for a long leasehold of Louise House from the London Borough of Lewisham. Occupation of the premises in Forest Hill commenced in 2014 after extensive repair works were undertaken, after which the main building has been fully let to artists ever since. We have been very pleased with the feedback we have received about how helpful it is to have such provision in the neighbourhood for local artists, and our tenants who have moved to the area have reported how welcoming the community has been and how much they have grown to like the area. As envisioned, we have artists at a variety of stages in their careers, from Turner Prize nominees to those just starting out.

V22 has engaged with the local community extensively since moving to the area. We have made contact with traders, businesses, organisations and individuals. Past, current and proposed future works have been informed by this community engagement, which has generated a fantastic response to our ideas and plans which have come about as a result.

In 2015, in partnership with SEE3, V22 was successful in applying for funding from the Mayor of London’s High Street Fund. We were also successful in our application to the Arts Council England’s Small Capital Grants programme for the redevelopment of Louise House.

With this funding V22 have been able to:
Renovate the ground floor of the rear building of Louise House (the Laundry) as an exhibition space, community studio, small café and events space and start the development of a community garden
Redesign and build the front garden of Louise House to form a single space with the adjacent library 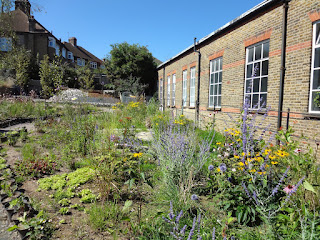 V22 were very pleased to open these new spaces at Louise House at a Community Open Day in July. It was wonderful to get positive feedback from the community and to celebrate with those who have contributed to making these works possible. The Open Day was followed by a six-week Summer Club hosting a variety of screenings, talks, workshops and family events. The Summer Club will become an annual event.

Part of our aim for the Summer Club was to engage with future partners for the Community Studio. This is a space in the old Laundry building at the rear of Louise House, which will be used to host a variety of community-focused events throughout the year. One of our largest partners will be the Forest Hill Library and its anchor tenant, The Philosophy Foundation — but we are also in discussions with a local art teacher who wants to run regular children’s classes, a yoga teacher who wants to host her sessions there, and a storyteller who is interested in hosting regular events.

We really want to engage with the local community about how the Community Studio and garden are used going forward and are looking for people interested in running events or workshops in the space. It might be coffee mornings, language classes, adult learning sessions of all kinds, pilates, crafts… the list is a long one. The space could accommodate a variety of events or activities from purely commercial ones — like product previews, a Christmas party venue for local businesses or a location for filming (which would all contribute to the costs of running the space) — to entirely not-for-profit initiatives. So, whatever your budget or idea, whatever your interest, we would love to hear from you; please email katherine [at] v22london.com.

One of the great things about knowing we will be in Louise House until the year 2141 is the ability to plan long-term partnerships with our neighbours. Thank you all for your support thus far!