A New Building for the Devonshire Road Nature Reserve 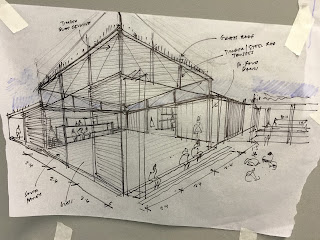 As anyone who has been to the Devonshire Road Nature Reserve in SE23 will know, their current 1970s portacabin building is not in the best of shape and for several years the Friends of Devonshire Road Nature Reserve have been talking about a replacement. Ideally this would be a project that could be largely built by volunteers, and would allow the reserve to expand its educational programmes and improve access for all.

Based on the model that Forest Hill Society used for the 2014 Forest Hill town centre charrette, we invited a group of local architects and other built environment professionals to give up their time over one weekend in May to help the reserve develop its brief for the building, to determine what could be accommodated on the site, and to come up with design ideas.

We had a great response and about a dozen local people got involved and,  over a weekend in late May, gathered together in the existing portacabin. We spent Saturday morning measuring and understanding the site’s levels — which slope down towards the railway line — and understanding the way the building fits in with the houses along Devonshire Road. We developed the project brief to account for the timber-building skills the reserves' volunteers had gained from their earlier green oak building projects (part funded by the Forest Hill Ward Assembly). We then worked in two groups to test different ideas: the first was for a larger, single-storey building to replace the existing one; while the second group investigated whether a two-storey option with a terrace overlooking the reserve would be possible. This included drawing up plans, sections and sketches of the different options.

Over a lovely lunch cooked by Jake, we presented our schemes. As a group, we concluded that the single-storey option would be the best approach — in order to make sure the project would be as 'buildable' as possible, and that it would be accessible without the expense of a lift across two floors.

The single-storey timber-framed approach was then developed by the group over the afternoon. This work included looking at the design merits of: an internal ramp that would allow wheelchair users access through the building; a large room for groups and a second room that would allow two school classes to visit the reserve at the same time; a small separate kitchen; and improved toilet facilities including a disabled WC.

The design ideas for the building focused on a simple grid construction that would allow the main structural sections to be built in advance as a 'kit of parts', for later assembly. The proposed design includes lots of glass, timber cladding and a raised roof pointing into the reserve itself. The spaces are designed to be flexible, with sliding partitions between rooms so that they can be used in a number of different ways.

On the Sunday, when some of the group were able to return, we concentrated on refining the single-storey scheme and looking at its buildability and detailing.

Although we made good progress there is still much to do. The next steps for the project will include building a model, drawing up the plans more accurately in CAD, and meeting again with the volunteers in the autumn for further project development. Professional quality plans will be needed for a future planning application, and also for funding applications to get the project off the ground and into construction. The Nature Reserve would like to get going on this project soon and, ideally, see it built during 2017!

How you can get involved: Devonshire Road Nature Reserve will be looking specifically for volunteers to help during site preparation work and construction. We plan to create a database of local volunteers, skills and tradespeople who may be able to assist. Once we know more precisely what is needed it would be really great to be able to receive donated materials for the build.

To volunteer or donate materials, please email hilary [at] fhsoc.com.