In April 2020 a small group of local residents started digging the tunnels to enable the South Circular to travel beneath the town centre, providing a pedestrianised surface level shopping, with all the traffic going underground from Dulwich Common to Waldram Park Road.

Three sites were chosen for the secret tunnel entrances to begin the three sections of tunnel; the former site of the Coop - once rumoured to become a hotel - has been turned into the eastern entrance tunnel, the western tunnel entrance has started from the car park of the former Harvester, and a mid-point tunnel had begun from the former Fairlawn nursery site on Waldenshaw Road. Until they are connected, the three separate tunnels have been nicknamed ‘Rod’, ‘Jane’ and ‘Freddy’. The first “break-through” is expected to occur in June this year, when Jane and Freddy will meet for the first time, completing the first half of the project.

At the Harvester site, volunteers have donned baggy jeans and beanie hats to smuggle out earth and have constructed a skate park as a distraction from the tunnelling.

Lockdown and Covid restrictions presented some difficulties for the mining volunteers, but the use of breathing apparatus and the three separate entrances, has allowed work to continue below ground with up to 18 people at any time while maintaining social distancing. Many of the volunteers are from the Forest Hill library, but the temporary closure of the library has meant that many have had spare time to devote to digging - it turns out library staff make excellent miners - and remarkably quiet. The school closures during lockdown allowed us to make use of child labour, with children as young as four able to enter the smaller tunnels sections before adults. 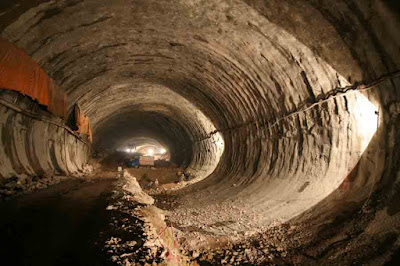 The entrances were strategically chosen to avoid the need to dig down very far to pass under the hill. The South London Clay is easy to dig through without the need for machinery and will yield important raw materials for the local pottery industry.  In fact, there is now so much clay available that local schools have been drafted in to produce hundreds of vases for families and friends.

The lack of heavy tunnelling equipment has been challenging, particularly the use of small garden appliances borrowed from local allotments. Yet, the hardest part of the project has been keeping it secret until this point, and before it was discovered by the authorities.

In total, the tunnel will run for one mile and will be tall enough for a double-decker bus. Air shafts will bring in air from Sydenham Woods, and exhaust gases will be vented from a chimney at the top of the Horniman Hill. Concerns of how fumes might affect Horniman Heights are expected to blow over, but they are being addressed at the highest levels.

Flora Pilo, from the Network for Urban Transport Safety, said in a statement “Digging underneath TfL roads is not recommended and should be left to professionals, but would you be able to help with the Bakerloo Line extension?”

The Forest Hill Society continue to look for new volunteers to join the digging, if you would be interested in helping, please email us.

* Press release issued by the Forest Hill Society on 1st April 2021. Some of the details in this article may not be valid on any other day of the year.
at Thursday, April 01, 2021

Oh how I wish it was

I would volunteer immediately but unfortunately the flares I have been wearing since the mid-seventies are unsuited to this work. I do have a second cousin who is willing to lend me a pair of jodphurs that he thinks are perfect for carrying soil.

Well, for one brief moment... and then I looked at the date ! Nicely done. !

This is laudable, but I hope it doesn't divert labour and effort from the Forest Hill Space Shuttle Launch Pad project, which must clearly remain a high priority for the Society.

Well I'm stunned. Well, devastated actually that the tunnel and the space launch pad will be competing for the resources for my proposed Forest Hill Funicular Railway Project which must be far more useful to local people than these other fanciful schemes.