Many people are bothered by noise from aircraft heading over our area to Heathrow and London City airports, though research shows that the decibel level and frequency of aircraft at which people become significantly disturbed varies. Surely, some aircraft noise is part and parcel of living in London? When planning huge expansions, airports are under environmental pressures as expectations rise for less noise and pollution. How then should Forest Hill ensure that its interests are taken into account?

In August 2018, I published a report on aircraft flying over our area, entitled No respite from aircraft noise in SE23. This explained how two airports, Heathrow and London City, combine their aircraft’s flight paths over Forest Hill, with each airport’s planes flying different paths and changing flight direction in different wind conditions. One of the report’s surprising findings was that south east London was unique in getting this double overflight situation; there was never a day when we did not get either one airport or the other’s planes, and quite often we get both at the same time. The Times picked up on this recently, name-checking Honor Oak and Forest Hill when the London Assembly reported on the issue. 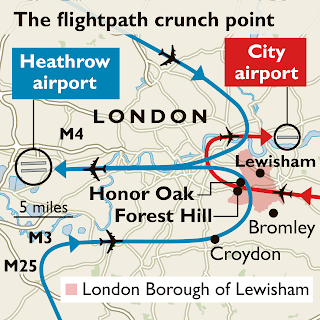 London City airport controls the lower-level airspace over Forest Hill. In February 2016 residents along a line from Sidcup to Catford, Forest Hill, Dulwich, Herne Hill and north to Vauxhall noticed a sudden change: Aircraft that were previously dispersed were now flying along a very precise path over the same homes and schools at or under 2,000ft. People living under this relatively new low-altitude concentrated route are now affected significantly worse than before.

Until 4th March Heathrow is running a huge consultation, the first of several, on a complete redesign of the higher -level airspace they control over London. A third runway is planned for 2026 and, whether or not it is built, the airspace that has evolved piecemeal over 70 years will be redesigned.

After these issues were discussed at the last Forest Hill Society AGM, a group of members has been intervening where it has seemed effective, for example by:


We’d like to see regular breaks from aircraft noise for all communities, planes flying higher for longer and an end to the crossing of flight paths above us. We'd also like to make sure that the voices of Forest Hill and neighbouring south east London communities are heard on plans that affect us. Each individual can make a small difference by participating in consultations and by complaining, when disturbed by noise, to airports.

Aside from our overflight issue being noted by The Times, it has also been acknowledged by London City airport, which has for the first time carried out some initial noise monitoring in our area; and by Heathrow airport, whose consultation specifically mentions the need to address the double overflight situation.