In this second article of a two-part series about wartime bombing of Forest Hill and south-east London, Alistair Dey looks at German bombing in the Second World War.
German aerial bombing of London in the Second World War can be divided into three main periods: the Blitz between 7 September 1940 and 16 May 1941; the Little or Baby Blitz between January and May 1944; and the V-weapon flying bomb and rocket attacks between June 1944 and March 1945. In between these concentrated attacks, the Germans kept up sporadic day and night ‘hit and run’ and nuisance attacks on towns and cities throughout England. For Londoners, life had a dangerous edge to it right up to the end of March 1945.

The Battle of Britain and the Blitz
Adolf Hitler was initially reluctant to bomb London. The Battle of Britain, starting in mid-July 1940, had seen the German air force, the Luftwaffe, attacking shipping in the English Channel and then attempting to destroy RAF Fighter Command by bombing its radar stations and airfields.

On the night of August 24-25, German bombers flying along their navigational radio beams towards Shorts aircraft factory at Rochester became confused by British radio beaming countermeasures. The bombers attempted to follow the Thames, missed Rochester and dropped their bombs on London. The following night 81 British bombers flew towards Berlin. Many lost their way but, while actual damage was slight, bombs did fall on central Berlin. The psychological impact was enormous. Outraged, Hitler ordered the Luftwaffe to concentrate, from 7 September, on all-out night attacks on London — which became the start of the Blitz.

This gave the RAF a chance to recover. When the next German daytime raid took place on 15 September, the Luftwaffe suffered their heaviest losses in the air war over Britain, forcing the Germans to reconsider their tactics. On 17 September Hitler postponed Operation Sea Lion, the planned invasion of Britain. The Battle of Britain was over. Henceforth, the Luftwaffe concentrated on bombing London and then other industrial cities at night. For 77 consecutive nights, except for one night when the weather was bad, large formations of German planes bombed London.

In London, people broke into underground stations for shelter and this became institutionalised, even though at the height of the Blitz, six out of ten people slept at home. There were evacuations from London, but this time about a third fewer people left London than at the outbreak of the war in 1939. Noteworthy and unfortunately tragic bombing incidents in Forest Hill included:-
• On 29 September 1940, three nuns were killed at the Sisters of Mercy Convent, 16 Mayow Road (now Our Lady & St Philip Neri Primary School)
• On 8 December, a parachute mine on Elsinore Road killed two people and injured 144, destroyed or damaged 370 houses and put Kilmorie Road School out of commission for the rest of the war
• On 19 April 1941 there were a spate of fires in the centre of Forest Hill, including Ghinns (later M&Co), 10-12 London Road, which was virtually gutted by the flames and had to be re-built
• On the same raid on 19 April, Forest Hill had to contend with a second spate of fires, which resulted in damage to The Foresters Arms pub in Perry Vale and Trinity Congregational Church, Stanstead Road; and two bombs which killed six people at 9-19 Siddons Road

The Blitz ended on 16 May 1941 largely as a result of Hitler’s decision to invade Russia in June 1941, which diverted aircraft from bombing London and other British cities to the attacks on the Eastern front. This was a welcome relief for Londoners and probably Hitler’s biggest miscalculation in the war. As the Luftwaffe turned towards the east, air-raid casualties decreased dramatically in the following two years.

The Baby Blitz
The Baby Blitz was a series of attacks by the Luftwaffe during January to May 1944. These were largely retaliatory attacks against the pounding of German cities by the RAF in 1943. The Germans had originally planned to retaliate against Britain by bombarding the south of England with V1 flying bombs but, as a result of technical development problems, this course of action had to be postponed. Consequently, the new series of retaliatory attacks on Britain were undertaken by conventional bombers.

The Baby Blitz killed 1,500 and seriously injured 3,000 in London. The severest battering in our area was on 22 March 1944 in a raid which lasted little more than an hour, but caused over 500 fires in south-east London.  Destruction included 35 fires in Perry Rise, Perry Vale and Garlies Road, including the roof of Perry Rise Baptist Church being destroyed; and 36 house fires in Hawksfield, Allenby, Pearfield and Marler Roads. Incendiary bombs killed one person at 189 Perry Vale, two people at the corner of Kilmorie and Vancouver Roads, a fire guard in Lescombe Road (near the Bell Green gasworks, which were always a potential target), two people at 82-84 Vancouver Road and one person at 14 Perry Rise. 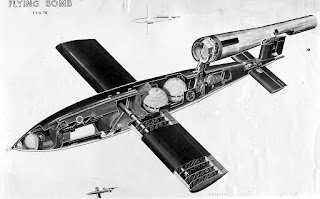 The final period of concentrated attacks on London came from V-weapons and started on 16 June 1944. These Vergeltungswaffen or ‘retaliation weapons’ were the V1 flying bomb and the V2 rocket. The V1 attacks came as a shock just ten days after the D-Day landings in Normandy.

The V1 was a small pilotless aircraft powered by a pulse-jet engine, and catapulted from launch ramps located at hundreds of sites in Holland, replacing those lost in France and Belgium after D-Day.

About two-thirds of the V1s crashed prematurely, were toppled by British fighters (which perfected a clever manoeuvre of flying alongside the bomb, then flicking a wingtip under its fins) or were shot down by anti-aircraft fire. Many of the remainder fell on and around London, bringing renewed anxiety and fear to a people exhausted by years of bombing and privation. By March 1945, over 10,000 V1 flying bombs had been fired, causing 24,000 casualties in England and many more in Belgium.

Photo: V1 rocket on the left being ‘tipped’ by a spitfire.


There was an intense 11-week bombing campaign from 16 June to the end of August 1944. Forest Hill was hit several times by flying bombs between 21 June and early August 1944. The worst week for casualties and number of bombs was between 21 and 26 June. On the 21st, 13 people died in Fermor Road, which was SE23’s single highest number of deaths. On the 23rd, eight people were injured in Ringmore Rise, and a direct hit on the pedestrian subway at Forest Hill station killed three and injured 18, badly damaged the station and wrecked several nearby shops. On the 24th, a V1 killed seven people in Ewelme Road; and on the 26th, eight people perished in Boveney Road.

V2 attacks added to the misery. The V2 was the world’s first ballistic missile, fuelled by alcohol and liquid oxygen, and it was impossible to intercept and destroy because it travelled at supersonic speeds. The first V2 crashed at Chiswick in west London on 8 September 1944, killing three people and injuring 17. By 27 March 1945 over 1,000 rockets had fallen on England, killing 2,700 Londoners. The worst V2 incident in England was on Saturday 25 November 1944 when a V2 rocket struck at midday at 277-281 New Cross Road, SE14, when Woolworths and the Co-op next door were crowded with shoppers. 168 people were killed and 123 seriously injured.

Within the Greater London area 24% of V1s and 21% of V2s fell on the boroughs of Bromley, Greenwich and Lewisham.

The Failure of German Bombing
German bombings, including the Blitz and V-weapon attacks, were a military failure for the Germans, but caused enormous damage to many cities, especially London. The Blitz was the worst period of the war for London and many other cities.

Although of little consolation to those subjected to German attacks, the change in targeting away from airfields gave the RAF time to recover and the predictability of the German attacks allowed the RAF to concentrate their fighter planes in a way not possible before. Moreover, Hermann Goering, the chief of the Luftwaffe, made a major error in planning the campaign. Instead of delivering a limited number of devastating attacks on selected targets such as power stations, he ordered long processions of bombers to scatter bombs across wide areas of London during raids lasting ten hours or more. Such tactics meant that, although people got little sleep, the Air Raid Precautions (ARP) personnel, firemen and ambulance services could usually deal with the damage and casualties, though they were very stretched. In fact, the German Blitz was an improvised affair — the Germans had no aircraft specifically designed for independent long-range bombing, no pilots trained for it and no clear picture of what they were attempting to do.

One of Hitler’s greatest follies in the final years of the war was the devotion of enormous scientific and industrial effort to the V-weapons. Although these weapons caused great apprehension and misery among the civilians of England (and Belgium), dumping small payloads of explosives with indifferent accuracy on the enemy could not conceivably justify the slave labour, materials and commitment of highly-skilled personnel and technology necessary to create delivery systems. Had Hitler forsaken the propaganda rewards of raining down V-weapons on England — to negligible military and industrial effect — and had concentrated his firepower, for example, on the Channel ports, the consequences could have been serious for the allied armies. The folly of persisting with the V-weapon programme, which drained Germany’s shrinking resources merely to torment the enemy’s population, highlighted the irrationality of Nazi behaviour as defeat beckoned.

Information on the specific bombing incidents mentioned in this article came from the book “Red Alert — South East London 1939-1945” by Lewis Blake, which is available from Sydenham Community Library and online from Lewisham Local History and Archives Centre.

Thanks so much for your research and this interesting article. We are considering the impact of civilian deaths and loss of homes as the anniversary of 1940 and the Blitz comes round and making that the focus of our 11th November 2020 remembrance service at St George's Church, Vancouver Road. This will lead to our greater awareness that all war now is essentially waged against civilians and the so called 'collateral damage' which we see so horrifyingly in Syria and elsewhere in the Middle East and other parts of the world.
Really grateful to you for your article. All good wishes
Janet Killeen (janet.killeen@ntlworld.com)

As a small boy my mother took me to One Tree Hill as we lived in BovilRoad and I remember seeing a plane or something similar crashed on One Tree Hill. Can anyone throw any light on it as it must have been 1944 or 1945

Just before my fourth birthday, I remember being dug out of a shelter in a house at the top left side of Wynall Rd in Perry Vale, I was alone in the shelter as my mother was seeing my father back to his raf base in North london they survived but were not rescued for some time, I will be 80 on 23 May best wishes William Skudder. williamskudder@gmail.com

my great grand parents were killed by the flying bomb in ewelme road 1944, they had a house on the corner of Ewelme road and devonshire road. it is now a housing estate

My mum (Greta Bond (maiden name Rimmel) lived at 9 Siddons Road where she was born in 1933. She died in February 2019 aged 85 but had told us how she was "bombed out" in the war. This would have been in the April 19th attack in 1941 that you've documented here and she would have been 8 years old when that happened. Later on in her life she married my dad , Ron and then they moved to Margate in Kent where I was born I visited Siddons road and it's interesting to see that the numbers jump from number 3 to number 25 and there is a much newer block of flats that now stands at the site where numbers 9 - 19 would have been. It seems that the numbers of the houses that were destroyed were "retired" as a mark of respect for those that lost their lives.