Following an earlier article on a possible DLR connection Michael Abrahams gives our views on how we could be connected to the Bakerloo line.

The first option for the Bakerloo Line is the Honor Oak Park route. This would be underground as far as Catford Bridge and then join the line at Lower Sydenham. This route has the added benefit of adding new stations in areas with relatively poor train connections (Burgess Park and Peckham Rye Common). 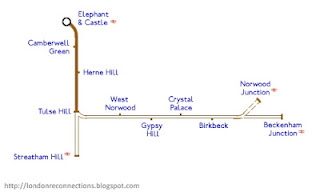 While this could come into conflict with the DLR plans, this is one of our favourites and would relieve pressure on our increasingly crowded existing services.

Option 3 is the preferred route for Lewisham Council. It provides a new underground route to Lewisham from where it would follow the Hayes Line via Catford. It is possible that as part of this route there could be an interchange with New Cross Gate and a new station at Bell Green, so this route could be adjusted to be of benefit to Forest Hill residents.

There are two further routes to which we would like to see consideration given. A route via Crofton Park would be the shortest tunnelling option, extending the Bakerloo line to south of Camberwell, where it would join the existing train line from Denmark Hill, via Peckham Rye, Nunhead, and Crofton Park, to Catford. This would make better use of the Crofton Park line, and allow for a possible extension to Bellingham and Bromley North.

A reliable tube service from Crofton Park would reduce demand at Honor Oak Park and Brockley, which would help slightly with the capacity. Unfortunately an interchange station between the Forest Hill line and the Crofton Park (Bakerloo) line is unlikely.

A fifth option could be best for us. This would loosely follow the 176 route from Elephant & Castle, stopping at Camberwell, Denmark Hill, East Dulwich, Barry Road (either end), Forest Hill, and Bell Green (and possibly beyond). Here it could interchange with the DLR line allowing both lines to go south of Catford without using the same track. This option provides the most interchange options of all routes. It has the potential to make more difference in journey times and options for the largest number of South East Londoners, relieving congestion both on our existing train line and buses. It surely makes sense in terms of regeneration. On the downside the length of tunnelling could be prohibitive.

The DLR and the Bakerloo extensions will significantly improve public transport in South East London. This is a discussion that will continue – please tell TfL and the Society what you think!

Well this would be brilliant but there is no sign of funding for this...am guessing there would have to be private funding too. The 1st option would be great - what route would it take from Peckham Rye to Peckham Common to Honor Oak - Catford...guessing there would be tunnels as no existing track. If we as a community need to put pressure to get this moving we should do it!

The Bakerloo is now coming to Catford Bridge. No confirmation of the route in from the north or out to the south.

Suggested Timetable: Work to start by 2020 and the line fully operational by 2026.

Bakerloo Line: In from New Cross to Lewisham via Ladywell then out of Catford to Hayes.

DLR Line: In to Catford (Plaza)through tunnel from Lewisham (shopping centre) via Lewisham Hospital to a new Catford station {Rushey Green -suggested name - to be on a pedestrianized plaza located on the south side of the A205 on the existing 'Halford's Ind Estate' with a sub A205 walkthrough interchange with existing Catford (high level) and Catford Bridge stations} then out to Forest Hill.

UPDATE : Both the DLR and the Bakerloo lines into the new Catford Bridge (Plaza Station Complex) due to be in service no later than 2023.