Every July, Philippe and Odette Grelat leave their home near the Horniman Museum for three weeks to join the huge support team which keeps the Tour de France on the road. They provide the catering for the TV crews and commentators who follow the cyclists for thousands of kilometres around France. We caught up with Philippe on his return to Forest Hill. 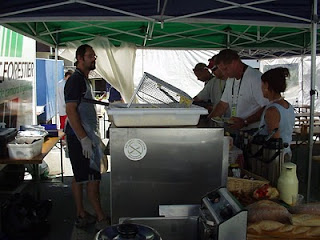 How did a French chef end up in Forest Hill?
We’re from the French Alps and Lyon originally. But eighteen years ago, I simply tossed a coin between going to Austria or England…adventure, adventure! Then ten years ago we found a flat on a hill surrounded by trees with no cars around to bother us!!!

How did you get involved in catering at the Tour de France? We approached the US, British, Danish, Belgian and Swedish television crews directly to see if they were interested. At that time, there was no catering and the organisers thought food service was far from essential. But now the Tour has become so big and everyone is too busy to leave the compound so they do need to be able to eat on site. We’ve been doing it for fourteen years.

The driving is a killer really, covering a total of 5500/6000 km. But the thrill comes from knowing that for those three weeks, you are the key to survival for the 100 guys you are catering for.

What is the most popular dish you serve? I shall say Duck Confit. We tried this year a vegetable “toad in a hole” and this was very successful.

Are you a big cycling fan? Yes I am, Odette not that much!

What do you do for the other 49 weeks of the year? I am a freelance chef working in the UK and abroad and Odette a therapist

Do you have a favourite place in Forest Hill? Energie Fitness Club