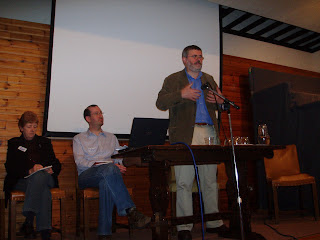 Steve Bullock welcomed the existence of the FH society as the council is always looking to work with local groups. He then touched on several topics of current interest to FH Society members:

Michael Abrahams then asked for questions from the floor and Steve Bulloc said that he was happy to take away any issues raised that he was unable to answer on the night.

SB – appears to be entirely commercial reasons – Post Office not willing to discuss.

Building in back gardens of existing houses

SB – needs to be addressed by the council in development plans.

SB – will take away.

SB – playgrounds mostly in public parks and these have been upgraded by at least one a year over the last few years. Agreed that more attention may need to be given to facilities for older children.

Availability of a Local Cinema

Cinema – the council cannot decide to have a cinema although the redevelopment of Lewisham town centre may provide an opportunity for one to be built. Films shown regularly at the Broadway Theatre in Catford.

Timing of traffic Lights at Junction resulting in queues on Honor Oak road and increased pollution – can it be tested?

SB – will investigate possibility of a pollution monitor.

Plans for additional events at the FH Day

SB – the festival relies on volunteers but he will be happy to talk to the organisers.

Why Re-Cycling items no longer have to be separated

SB – a new plant in Woolwich can sift and separate different materials.

Plans to encourage shops in FH

SB – East London Line may stimulate more demand for shops although no big retail units are proposed for FH. There has been some discussion of a coffee shop chain taking over a vacant unit beside Sainsburys.

Traffic on Perry Vale – Problem of corner with Dacres Road

SB – agreed there was a problem of other people’s rubbish being put into empty dustbins now that more items are being recycled. Council is replacing black bins with smaller ones over time but agreed to talk to the person involved in this particular case ().

SB – agreed to sort this out.

SB – improvements will be made to accessibility at the station.

Janet Vitmayer – Manager & Director of the Museum and Gardens

Lottery Funding for the

The infrastructure of the gardens requires investment and certain areas need improving. A landscape architect has been appointed and an outline plan should be ready by the end of September 2007. A consultation process with a wide range of groups will go on over several years.

There will be an information stand at the Horniman May Plant Fair on the 19th May where comments and suggestions can be passed on.

Issues raised by the audience:

Michael Abrahams listed the issues that the Society has recently campaigned on and the events it had organised and asked people what they would like the society to do next:

Inclusion of the train service from FH to in discussions on the east line.

Michael advised that this service will probably be lost but will have increased services to with more choice of service from there.

Traffic problems in FH town centre – campaign for a one way system.

Campaign for open space in to become a community garden.

Fitting a lift at FH station to provide access to opposite platform.

Michael advised that the Department for Transport had provided money to improve accessibility at the station.

More activities to be included in the FH Day festival next year.

The meeting closed at 9.30pam and Michael thanked everyone for attending.