This Folly tower, also known as the Bayer's Folly or the Forest Hill Folly, is medieval in appearance and can be found in the garden of a private house next to the Honor Oak covered reservoir. It sits on the ridge of Forest Hill at what is possibly its highest point of about 104 meters above sea level. Its position is shown on the map below (from the 1913 Ordnance Survey map). The tower is approximately 10 meters high including the staircase turret. From the top there are spectacular views of London in every direction. The Folly was built in the grounds of a large mansion in Honor Oak Road, Tewkesbury Lodge, which was built around 1855. 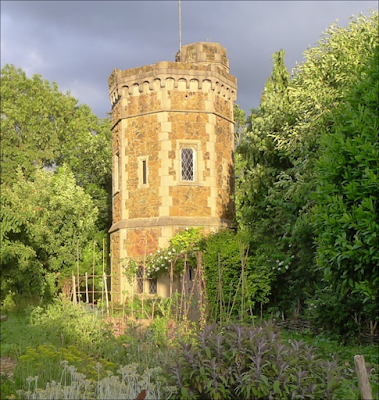 The Folly is Grade II listed by Historic England and constructed of random sized undressed ironstone blocks in a warm ochre colour. The tower is octagonal with a narrow spiral staircase contained within a turret which abuts the tower. There are concrete dressings such as quoins (corner blocks), a drip moulding at first floor level, a bow tell moulding at second floor level and a corbel table supporting a parapet which may have originally been crenelated. A section of the parapet over one of the octagonal sides collapsed many years ago. There are rooms on the ground and first floors and a flat viewing area at the top enclosed by the now incomplete parapet. 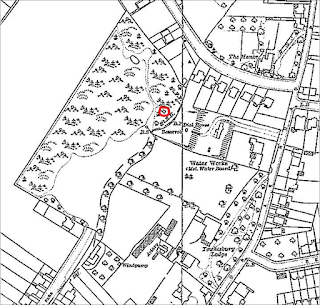 The original entrance door was badly damaged when the Folly suffered a fire and the door frame still has some burn marks on it. The door was first replaced with a pine one and more recently a hardwood one. The door has a hood mould which continues over the windows on either side. There are three pairs of windows on the ground floor. One pair either side of the door and one pair at the rear of the tower. Each of these windows has elliptical lintels which are reminiscent of the Tudor period. The room on the first floor is lit by four large windows with three smaller ones in between. These windows are of a different design to those on the ground floor being rectangular and housed in plain chamfered frames. There are also four slim windows in the turret which give some illumination to the spiral staircase within. The windows were vandalised many years ago so the glass and lead glazing is not original.

Opinions vary as to when the Folly was built (either around 1880 or about 10 years later) and who built it (Alfred Richards or Charles Bayer). Some sources say it was built about 1880 by Charles Bayer who made his fortune as a stay and corset manufacturer. However, Alfred Richards, a very wealthy barrister and probably the second owner of Tewkesbury Lodge, was living there at the time of the 1871 census and his death certificate states that he died in the house in 1887. So if it was built in 1880 Alfred Richards would have commissioned the project.

Charles Bayer appears to have bought Tewkesbury Lodge from the trustees of the estate of Alfred Richards in July 1889 and the 1891 census confirms that he was living there with his family. Lewisham Local History and Archives Centre hold the conveyance for this sale which might, if the Folly was built prior to the sale, be itemised in the document. However, at the time of writing it is not possible to view this document as the Centre remains closed to the public and it is not available digitally. So, if the Folly was built in 1890 it would have been by Charles Bayer.

At some point either Alfred Richards or Charles Bayer extended the grounds of Tewkesbury Lodge by purchasing a large area of land to the west and northwest of the Lodge's gardens. Charles Bayer was planning to leave this land and the Folly tower in his will to the London County Council as an extension to the Horniman Gardens. This would have provided an extensive area of grassland, bushes and trees for the public to walk in and enjoy the views over London. Sadly he died before this could be completed and his beneficiaries decided to sell the land which was rapidly built over to form the Tewkesbury Lodge Estate.

Many thanks to the owners, Sharon and Michael, for showing me the Folly, letting me climb to the top to see the wonderful view and being so helpful with information about it.
at Thursday, September 09, 2021