Me and Mr. Jones

Last November a new business, Mr. Jones Watches, opened at 61 Dartmouth Road in a unit once occupied by the Forest Hill Supermarket.

Glimpse inside through the coloured shutters and you’ll see a bright and airy workshop with a team of artisans leaning over tables surrounded by an array of small tools. If you’re really lucky you’ll see Stanley in the window, the owner’s dog keeping a close eye on local shoppers. Our new arrival is only open by appointment, but a look at their website shows off a collection of the most ‘unique and unusual’ watches. The designs range from the colourful and fanciful to the monochromatic and macabre. But with names like ‘a Perfectly useless afternoon’ and ‘the Promise of happiness’ you feel each must have their own story, perhaps just as mysterious as some of the watch movements themselves. 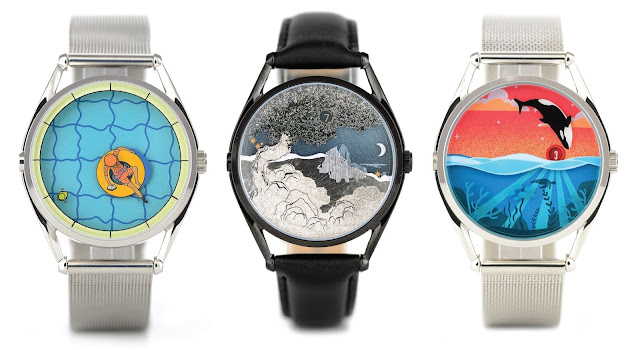 Mr. Jones is Crispin Jones and on one hot summer day (there have been so few) I met up with Crispin for a chat about this new business, watches and his unusual journey from artist to watchmaker.

Mr. Jones Watches’ new Forest Hill location was born of necessity. With customers from around the world, many of them collectors, Crispin found himself in need of more space after 13 years of operating in the Oxo Tower and Camberwell. Now living in Honor Oak Park, Crispin and his partner Amy had fallen in love with the area. Saturdays included visits to Dartmouth Road, lunch at Aga’s Little Deli and visits to the many independent stores. So when the shop at 61 Dartmouth Road became available they had no qualms in buying it. This was followed by a complete refit with part of the rear turned into a double height space bringing it lots of natural light and perfect for a new workshop for their exquisite watches. 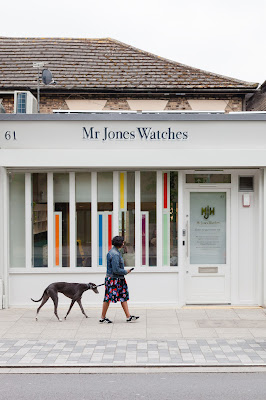 This is their third location. Mr. Jones Watches first opened in a small unit in the Oxo Tower in 2009. Crispin describes this as the smallest unit in the building but from there he assembled his watches and sold them to the public. After repatriating production to London from China around 2012, they opened a dedicated workshop in Camberwell. This Forest Hill location was intended to house their entire team, but business has been good and now they plan to keep both Camberwell and Forest Hill operating along with the store in Bankside.

Crispin did not start out as a watchmaker. His undergraduate degree at Kingston University was in sculpture through which he developed a fascination in Photoshop (then a new design tool) and in graphic design. His output focussed on the documentation of imagined pieces through photography. A Masters at the Royal College of Art in computer-related design encouraged him to look at the social function of technology. In his own words, this was a ‘playful’ way to look at the world using technology and the interface with it. Following graduation, he began work with Phillips Design (of shaver fame) and for IDEO London — a multi-national design and consulting firm.

It was while with IDEO, in the early 2000s, that he created ‘Social Phones’, an exhibition of mobile phone designs that forced users to be more aware of their environment. This included a phone for people who spoke too loudly (think Dom Joly), delivering an electric shock to the user dependant on how loudly the person on the other end was speaking. Another recreated the phone as a musical instrument with the numbers ‘played’ to dial the phone.

This led naturally to Crispin’s next project, an exhibition of watches designed to question the function of the watch itself. He produced seven designs, among them Fallax, a lie detector and Summissus a watch to remind the wearer of their mortality. The exhibition and these watches were a success and gave Crispin an international profile.

While a success, Crispin also found the process unsatisfying. The watches were one-offs and while provocative in their function, they were simply exhibition pieces. He began to imagine a watch that was both unique in its design but affordable in price. It is here we see the fine artist with a computer design degree become the watchmaker.

In 2006, Crispin’s first five watches were all self-designed. Some drew inspiration from past exhibition work, like the Summissus — now re-created as ‘Remember you will die’, this has become one of his best sellers. By replacing the conventional hands with transparent disc hands, he was able to explore designs that step away from traditional watch faces allowing the face itself to be an integral part of the movement. Today the watches move between the macabre to the sublimely beautiful.

At first Crispin designed his own watches. Often the designs did reference mortality. As he himself noted, timepieces by their nature offer a narrative on death. After four years, he began to collaborate on designs, where his collaborators were people with a connection to time. For instance, a collaboration with Graeme Obree, A Scotsman who twice held the world hour record in cycling.

Today most of Mr. Jones Watches’ new designs are realised through collaboration. Many are from artists known to Crispin, though some originate through unsolicited submissions. This includes their best-selling watch ‘A perfectly useless afternoon’ which came from working with Kristoff Devos, a Belgium illustrator and author. Keeping with the theme of ‘time’ and storytelling, this watch serves as a gentle reminder to take it easy and spend time enjoying the moment. 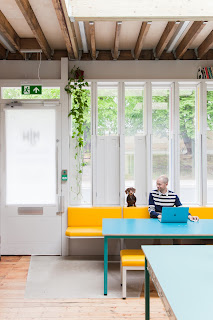 Britain once had a clockmaking industry, but after the war, much of this art was lost to the Swiss and then the Chinese. Therefore, it is hardly surprising that Crispin’s journey to watch making was unconventional.

His first attempt to manufacture came by randomly contacting Chinese manufacturers, finally finding one only requiring a minimum order of 500. After visiting the manufacturer in China in 2012, he became confident he could shorten the design process by printing the prototypes in London. By bringing this process in-house, Crispin also discovered he could introduce more colour, texture and affects. He found he could create a scene inside the watch face, and the time becomes part of it.

Today all the watches are designed AND produced right here in London including in Forest Hill. This makes Mr. Jones Watches a very rare business today. Watches are still designed in small production runs, but the printing is now done in house and by the hand of artisans. Crispin continues to create a few new designs each year, with the most popular joining the permanent collection.

Speaking with Crispin it is very clear he is passionate about his watches, proud of the design collaborations and their accessibility to the public. These are truly unique artworks, designed and produced right here in Forest Hill, and enjoyed by customers and fans all over the world. When it comes time to buy a gift that special person, be it a friend, a loved one or even you give some thought to a Mr. Jones Watch. After all, a timepiece is timeless.