Not long after the outbreak of the First World War, the numbers of wounded servicemen arriving in England threatened to overwhelm existing military medical facilities. Many civilian hospitals were requisitioned for military use by the War Office. This included a large part of the recently opened King's College Hospital, which became the Fourth London General Hospital. As the casualties from France increased, the hospital was extended into the nearby Ruskin Park. Huts and tents were erected, and a wooden bridge was built across the nearby railway line to provide access. 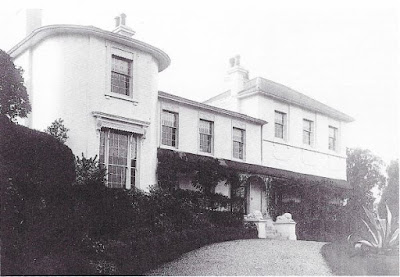 The British Red Cross and the Order of St John of Jerusalem combined to form the Joint War Committee. An important part of the work of this committee was the setting up and organisation of smaller auxiliary hospitals to ease the pressure on large military hospitals. These formed the final link in the chain of evacuation for many wounded soldiers. A network of over 3,000 auxiliary hospitals spread across Britain. These varied greatly in size and included private houses donated by their owners. One of these was Fairlawn House.

Fairlawn House was a large mansion with extensive grounds and outbuildings, built between 1808 and 1816. It stood on the west side of Honor Oak Road in Forest Hill.

When Fairlawn Auxiliary Military Hospital opened in November 1915 to provide convalescence for enlisted servicemen, it had 35 beds, later increased to 65. In 1916 the hospital was expanded with an additional house — Border Lodge in Sydenham — and again in 1917, when a large house in Manor Mount was added, providing a total of 174 beds.

The principal role of auxiliary hospitals was the care of convalescing patients. However, the term 'convalescent' must be understood in the military context. The expectation was that these soldiers would return to active service as soon as they were fit enough. The War Office was concerned that recovering solders might abscond if they were allowed to go home. These hospitals enabled soldiers to be kept under military control and discipline and they were required to wear a distinctive blue uniform.

Fairlawn Auxiliary Military Hospital was run by a Commandant and a Quartermaster who were resident at the hospital. There were eight trained nurses, supported by 14 full-time and 32 part-time voluntary nurses from the London 216 and 35 Voluntary Aid Detachments (VADs). The VADs were usually comprised of women but might have included a few men who had not been called up for military service. Local doctors provided medical supervision. There would have been a cook, but most of the domestic work would have been undertaken by local volunteers.

Nursing convalescent patients required a very different skill set from acute nursing. The focus was on rehabilitation through exercise, relaxation, diet, rest and sleep. Patients at Fairlawn Auxiliary Military Hospital would have also been encouraged to do gardening. The hospital would have been equipped and supported by local fund raising, which would have also provided for the daily needs and comforts of the soldiers by supplying items such as playing cards, board games, walking sticks and slippers.

The hospital closed in October 1919, and of the 2,724 admissions during the war period there were no recorded deaths. However, 30 patients and five VAD nurses who returned to the war were killed. After the war a memorial bronze plaque presented by the VADs was placed in St Paul's Church in Waldenshaw Road. No names were listed on the plaque, but the inscription read "To the glory of God and in memory of the patients and staff of the Fairlawn Auxiliary Military Hospital who have passed away during the Great War." St Paul's Church was badly damaged by bombs in 1943 during the Second World War. Thereafter, it was demolished and the war memorial was lost.

Fairlawn House was destroyed by a V1 flying bomb during the Second World War which also caused extensive damage to neighbouring buildings. Fairlawn Primary School now occupies the site, and an annexe to the school was built on the site of St Paul's Church in Waldenshaw Road.