Back from the Brink: Trees of Significance

At the top of the hill in the Horniman Gardens, near to the Butterfly House, there is a prehistoric park. Next to the model of the 75 million-year-old Velociraptor among the ferns, Cycads, Horsetails, Ginkgo and Monkey Puzzle is a specimen of the brilliant green Wollemi Pine. 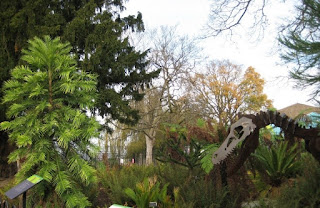 The Wollemi Pine, which first appeared during the Cretaceous period around 90 million years ago, was thought to be extinct until 1994 when a specimen was found in the Blue Mountains of Australia, from which seeds were taken, distributed to specialised botanical institutions around the world and germinated. Now an example of this prehistoric survivor has had a chance to live again … in our Horniman Gardens’ prehistory patch.

Elsewhere, near the beautiful Victorian conservatory, is another magnificent survivor from prehistory: the Chinese (or Dawn) Redwood. This Redwood holds an interesting place in the history of palaeobotany as one of the few living plants known first as a fossil record until, in 1944, living trees were discovered in China. There are several specimens in the Horniman Gardens. 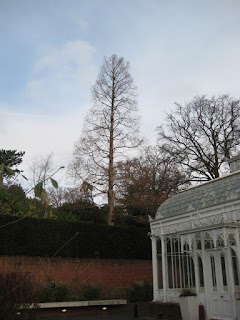 How lucky we are to be able to enjoy these throwbacks from the time when dinosaurs walked the earth, and when flowering plants had yet to develop. These are our direct contacts with the past, to be enjoyed in the present and, we hope, to survive for future generations. Significant trees indeed!