Edward (Ted) Charles Christmas was born in Lewisham in 1867. By 1871 his family was living above the stables of Prospect House, which is now 79 London Road (on the corner of Taymount Rise). Ted’s father was the gardener at Prospect House, and its garden extended from the rear of the house up Taymount Rise to St Paul’s Church. In his early years, Ted trained as a carpenter and then went on to install “sanitary plumbing”, electric bells, burglar and fire alarms, Lincrusta wallpaper and Roman mosaic tiles. However, his speciality was “artistic joinery” and there were, apparently, many fine shop fronts installed by him.

Throughout Forest Hill, Ted Christmas and his construction company built a number of houses and converted other properties to flats. Many of these houses form the basis of the Forest Hill Conservation Area, which includes properties on Thorpewood Avenue, Round Hill and London Road. Unfortunately, there has not been any protection for the houses in the Perry Vale area that form a key group of Christmas houses.

His best-known and one of the earliest developments is located between Perry Vale and South Road in Forest Hill. In 1901, he completed 108-116 Perry Vale: five substantial, detached houses called Linstead, Ashdale, Ulverston, Rosaville and Aberleigh in honour of his wife, Laura. A couple of years later, 131-153 Perry Vale were completed, their names spelling “Ted Christmas”. Round the corner, 72-64 Sunderland Road spell “Grace”, his daughter’s name. He also built houses in Gaynesford Road and several other groups of houses in this area. They are distinctive, and easily recognised. 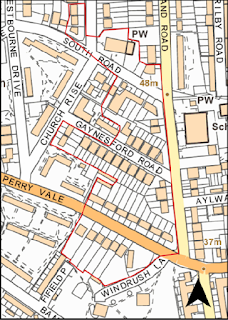 As a result of concerns by local residents, Lewisham Council are now consulting on creating a new conservation area to recognize and protect these houses alongside a number of other architecturally significant buildings in the area. The conservation area would stretch from Perry Vale to South Road and from Sunderland Road to Church Rise — a small area, but one which includes some lovely buildings.

As well as protecting these Christmas houses, the conservation area makes note of some important memorials in the graveyard of Christ Church on South Road. Of particular interest is the 15-foot obelisk memorial to George Baxter (1804-1867), the inventor of colour printing; and Joseph and Edward Tetley, the founders of Tetley Tea, which was just one of the tea brands owned by Forest Hill residents in Victorian times (another notable brand being Horniman Tea).

More information about Ted Christmas can be found on local historian Steve Grindlay’s blog at:
http://sydenhamforesthillhistory.blogspot.com.