Looking Out for Stag Beetles 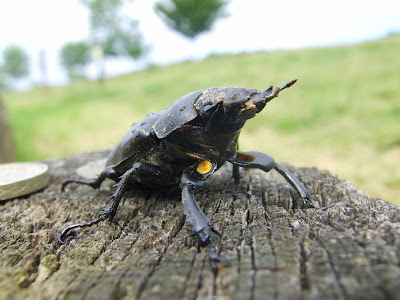 Among the wood-boring insects found in the UK, stag beetles (lucanus cervus) are surely the most magnificent as Britain’s largest land insects. In 2006 an article about stag beetles in the first issue of the Forest Hill Society’s newsletter noted how they were declining in number; and that South East London was a ‘hotspot’ for the beetles— with the area round Crystal Palace, Forest Hill and Sydenham particularly favoured.

In the 10 years since that article was published, I have observed that numbers continue to decline. Although there are thriving colonies in areas such as Devonshire Road Nature Reserve, and among the ancient woods of Sydenham Hill Woods, they are no longer common in Mayow Park, despite plenty of suitable wild areas within the park’s periphery. Damage to their habitats in gardens or parks — as well as being dug up by predators, such as foxes — are significant factors in their loss. Another possible cause is that they are clumsy fliers, bumping into objects and landing on the ground, where they are caught by cats or crushed by cars. Larvae being dug up before they reach the adult stage and adult stags dying before finding a mate also work against the survival of colonies.

What is their ideal habitat? Piles of dead wood with some logs below-ground make the ideal habitat for stag beetles to lay eggs. White larvae then emerge from the eggs and spend up to seven years underground, eating their way  through dead wood before pupating and becoming the large insects we can all identify. Tidy gardens are not suitable habitats but wooded corners with log piles are more attractive.

The ‘antlers’ of male stags are harmless to us and are in fact jaws, used to fight other male stags. The female stags have small pincers which can give a pinch, so beware if you hold one. You can tell stag beetles from similar looking larvae: the lesser stag beetle larvae feed on decaying wood above ground while cockchafer larvae feed on living roots.

Article by By Alona Sheridan
Photo by Ernie Thomason