In this first article of a two-part series about wartime bombing of Forest Hill and South East London, Alistair Dey looks at German bombing in the First World War.


When walking the streets of Forest Hill (or indeed in most big cities of the UK) you come across houses that are out of character with the immediate buildings and architecture. This can be caused by the action of developers or the local Council, but sometimes it is a result of German aerial bombing in the Second World War. However, German bombing of London did not start in September 1940 with the Second World War Blitz. London had also been bombed in the First World War.

In a curious parallel with Hitler’s initial reluctance to bomb London in the Second World War, Kaiser Wilhelm II initially vetoed the demands of the German military to attack Britain by air. With his close ties to the British royal family, and believing like many that the war would soon be over, he did not want to be held responsible for destroying London’s cultural heritage.

As pressure mounted on him, and more Zeppelins became available, the Kaiser finally approved the bombing of England, and in January 1915 Great Yarmouth was bombed. But the Kaiser continued to exclude London until May of that year, when he approved bombing east of the Tower of London. In July 1915 that approval extended to the whole of London.

On the night of 31 May 1915, a single German Zeppelin airship appeared over North London and began dropping its deadly cargo on the darkened streets below. This was the first time that the capital had been bombed from the air. The Zeppelin raids on London continued in 1916 but tailed off in 1917.

At the top of One Tree Hill above Honor Oak Park there was a gun emplacement to counter the threat of Zeppelins. A naval gun was mounted here in 1916. The plaque next to the remains of the gun emplacement suggests that not only did the gunners not shoot down any Zeppelins (there’s no shame in that) but might have caused damage to tramlines near Peckham Rye Common with a missed shot. 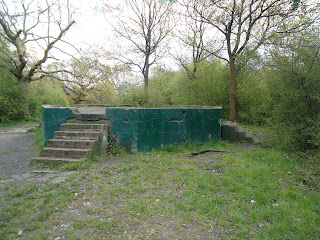 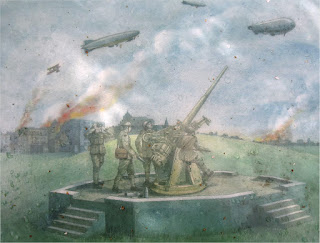 By 1917 Zeppelin raids were being phased out and replaced by the superior Gotha and Giant aeroplanes. One of the technical developments which helped make these aeroplanes serious weapons of war was the introduction of proper bomb-sights in 1915.

The first daylight raids by aeroplanes on London took place in May 1917 and further daylight raids followed in June and July 1917. In September 1917 the Germans switched to night raids, the last one being on 19-20 May 1918. Of about 15 night raids, seven or eight bombed South East London, mostly near the River Thames.

Again Forest Hill escaped damage but Hither Green was once more hit on 17 May 1918 — with thankfully no casualties. The last German bombing raid of World War One was on 19-20 May 1918 and it was one of the deadliest. Lewisham, Lee, Hither Green (2 killed), Catford (1 killed) and Sydenham (18 killed) were all hit. The single 100kg bomb which hit Sydenham caused the most casualties in that last raid and fell on the corner of Sydenham Road and Fairlawn Park, killing 18 people, including 5 soldiers, and destroying 3 shops. There is a memorial to the dead in nearby All Saints Church in Trewsbury Road. 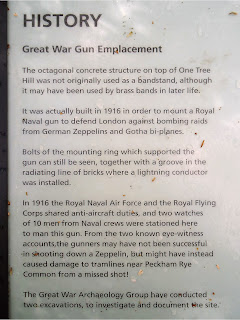 Effectiveness and Consequences of the Bombing
It is easy to forget how new aircraft were in the First World War. The first Zeppelin flew in 1900 and the first powered aeroplane had its first very tentative flight in December 1903, less than 11 years before the outbreak of the First World War. Louis Bleriot had only flown across the English Channel in 1909. And as weapons of war, the first ever bomb from an aeroplane was dropped by the Italian air force on Turkish troops in Libya in the little-known Italian-Turkish War of 1911-12.

The sporadic German bombing of London in the First World War may at first sight seem militarily pointless. It is true that by later standards the bombing had little material effect. Even so, by the end of the war 668 Londoners had been killed, and the government had had to withdraw fighter squadrons from the Western Front and set up anti-aircraft defences. Most attacks were random but some military installations were targeted and hit, albeit to limited effect (Woolwich Arsenal being a case in point).

There also seems to have been a morale effect: while there were no mass panics, many people were understandably very frightened, and the fear persisted and grew in the 1930s — a major factor in the peace movement of that time. After all, if a few airships and bi-planes could inflict such damage, their successors might flatten entire towns and kill hundreds of thousands. To an extent the British Government agreed, hence the policy of appeasement and (more positively) an improved provision of air defences and an evacuation scheme. These were certainly needed in World War Two when London, including Forest Hill, suffered severely.

There is information on First World War bombing of Lewisham in the website of the Lewisham Local History and Archives Centre under “Lewisham War Memorials”.

Pictures of gun emplacement and ‘history’ from one of the seven signs on One Tree Hill. Also shown is a recent picture of the gun emplacement today.
at Thursday, June 09, 2016