How long have you lived in Forest Hill?I have lived in Sydenham or Forest Hill since my parents moved here when I was one year old. My siblings and I attended Eliot Bank School. My sister, sister-in-law and I all went to Sydenham School; my brother and brother-in-law both went to Forest Hill School, so I feel quite rooted here.

I was away in various places at University or work for 14 years, then came back in 1994. Oliver and I moved into our current house in Forest Hill in 1997.

When did you join the Forest Hill Society and which committees have you been on?I was at the founding meeting of the Society 9 years ago in the Dartmouth Arms Pub. At that time I did not know any of the other committee members, but we quickly agreed to work together, and I was involved with organising our inaugural general meeting at the Friends Meeting House. Since then I have been on the planning committee. I have no professional expertise in planning, but I am interested in what our environment is like, and do not mind asking lots of questions.

Do you enjoy using Forest Hill swimming pool?I remember walking to Forest Hill Pools from both my primary school and my secondary school to attend swimming lessons. It was part of my childhood. Later, my children had lessons there. So when proposals came up in 2002 to refurbish or rebuild (one pool!) I went to the meetings because I was concerned for the future of the Pools. That consultation did not come to any conclusion, in part because the local community was divided over what was wanted. By the time the next consultation began I was a member of the FH Society committee, and I agreed to be our lay representative on the Stakeholder Group.

The Council brought forward various unacceptable proposals and we had many meetings from 2007 until 2011, with much protesting along the way. I think in the end it was worth it as finally almost everyone got what they wanted: the historic facade building was retained, the actual pools are new facilities built to modern standards - and there are two of them! 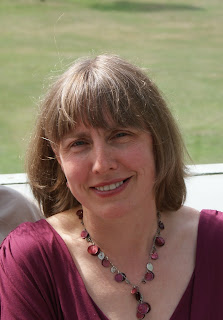 What do you do when you're not looking after Forest Hill?I work as a GP in Lambeth, and I row or coach rowing - but I do spend a lot of time looking after Forest Hill! Apart from the Forest Hill Society and its various activities, I am an active friend of the Devonshire Road Nature Reserve (mainly this involves baking), I am a governor of Forest Hill School, and I am a member of Perry Vale Ward Labour Party (where I argue a lot about health related issues).

Were you involved in the Save Lewisham Hospital Campaign?I became involved with this in my capacity as Honorary Secretary of the Lewisham Division of the BMA. We were outraged by the proposals, both as clinicians and as local residents who use the services. The Trust Special Administrator did not have clue! It was a great campaign to be involved in, with a real communality of purpose between the scientists, clinicians, health policy experts and ordinary inhabitants of Lewisham. My daughter and I went to the High Court to hear some of the Judicial Review, which was a learning experience. It was even better when we won! But we cannot be too complacent: funding cuts and reorganisation of services are still a threat.

What's the furthest you have rowed?The furthest measured distance I have rowed was 31 miles from Lincoln to Boston with a college alumnus crew in September this year. The absolute furthest would have been an attempted cross-channel row in 2013.  This was in a Waterman's Cutter, which has fixed seats; again a crew of veterans, this time all local women. It was very successful in fundraising for the Ahoy! Centre in Deptford (over £40k). However, shortly before we left the French shut their waters to cross channel rowers, so we decided to row to a buoy in the middle and back. Aiming for the buoy was a mistake: we should have just gone to the middle according to the chart and come back. The tides pushed us South, then North, and we were at sea for over 8 hours... I do not know how far we rowed but it was a lot more than the planned 22 miles.

What do you like most about Forest Hill?I like that it is green – lots of trees – and the people are friendly.

Do you have a favourite restaurant in the local area?It is hard to choose these days, but I have always found myself drawn back to the Dartmouth Arms.

What improvements would you like to see in Forest Hill?I really wish we could bury the South Circular in a tunnel! And indeed anything which makes life easier for pedestrians and cyclists. Otherwise, I am always in favour of more trees and greenery (Quetta does a great job!), and I love a variety of independent shops, cafes and restaurants/pubs.