Park receives Green Flag Award!
Fourteen of Lewisham’s parks were each awarded a Green Flag in July this year and Mayow Park was one of them. This was the 19th year of the awards, which highlight the value of parks and green spaces for their local communities. We must commend Glendale Lewisham for working to the standards demanded for achieving these awards.

In addition to general maintenance such as grass cutting and repair to facilities, Glendale has responsibility for maintaining the cricket square to a suitable standard for weekly matches during the cricket season. Cricket in Mayow Park looks set to stay and the most active home team, Caribbean Mix, is doing very well. The fixtures’ list is posted on the notice boards around the park.

For those who have not visited the park in a while, an outdoor ‘gym and trim’ trail was installed in January 2015. The equipment appeals to all ages and not only to fitness enthusiasts. An extensive range of fitness facilities now exists if we include the children’s playground and older children’s area, and tennis courts.
Having such a busy park requires a quality café, and Mayow Park has just that. Brown and Green opened in August 2014 and has proved to be an invaluable addition to the park. 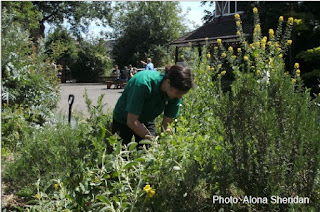 Friends of Mayow Park’s (FOMP’s) gardening volunteers look after plant beds at the Triangle (near the café), which consist of a fruit garden and herb garden. These beds replace the original roses and bedding plants that were costly to maintain. Now, park users can pick leaves of herbs or taste the raspberries, admire the tall cardoon plants that bumble bees love, meander along the two woodchip paths or relax on the grass by the magnificent dawn redwood  tree. The orchard of eleven fruit trees, near the tennis courts, is now in its fourth summer and, with Lewisham Council’s approval, will receive additional fruit trees. Lewisham’s Nature’s Gym conservation volunteers visit three or four times a year, working alongside FOMP, to help maintain these areas (photo, below). Their blog recently featured our very own Mayow Park — see natureconservationlewisham.co.uk/category/natures-gym.

Mayow Park is also the home of Grow Mayow, an independent community garden, situated behind the café. Their activities and events have a great focus on gardening and the environment. A measure of their popularity was evident when £1,890 funding for beekeeping activities was awarded at the Perry Vale Assembly last November (2014). Congratulations to Grow Mayow for this success!

Special events
The bowling green of the former bowls club — which closed a couple of years ago — can be hired for special events, including parties and open-air film screenings. As part of Sydenham Arts’ Summer Festival, the film ‘The Wizard of Oz’ was screened on a Sunday evening in early July. Other summer events included Lewisham Council’s dog micro-chipping event, which was well attended by dog-owners, and Perry Vale Assembly’s successful ‘Lark in the Park’ community event.