The High Court today (31 July 2013) found that the Secretary of State for Health, Jeremy Hunt MP, had acted outside his powers and therefore unlawfully, in deciding to substantially cut services and close departments at Lewisham Hospital.

In today’s judgment Mr Justice Silber said that the decision of the Secretary of State must be “quashed” as he had acted outside his powers as Secretary of State, and in breach of the National Health Service Act 2006, when he announced to Parliament that services at Lewisham Hospital would be downgraded and closed.

The High Court today found that “The TSA did not have vires [the power] to make his recommendations relating to LH [Lewisham Hospital]; The Secretary of State did not have vires to make his Decision relating to LH.” (Para 208) ‘Therefore the Decision of the Secretary of State insofar as it relates to LH must be quashed as must the recommendations of the TSA also insofar as they relate to LH.’ (Para 210)


Details above taken from http://www.savelewishamhospital.com/ where you can find the full press release from the campaign team.

The Forest Hill Society has consistently supported the campaign to protect services in Lewisham Hospital and welcome today's judgement. We hope that this is an end to the matter and that the Department of Health do not choose to appeal against this judgement.

Walk in the Great North Wood

The Friends of One Tree Hill and London Wildlife Trust have teamed up to organise a free walk this Sunday (4 August) with Daniel Greenwood retracing the remnant woodlands of the Great North Wood that are accessible on foot.

The Great North Wood once stretched from Deptford to Selhurst, with One Tree Hill, Sydenham Hill Wood, Dulwich Wood and Dulwich Upper Wood being living remnants of it in one way or another. This is an excellent way to discover the natural landscape of the local area and learn about its history, as well as getting some very good exercise.

Meet at the Honor Oak Park entrance to One Tree Hill at noon, next to the Hindu Temple on the road leading up to St. Augustine’s Church. The walk will go over the hill to Brenchley Gardens, along Wood Vale to admire the ancient oak boundary trees and down to Cox’s Walk. After that it will go into Sydenham Hill Wood, through to Dulwich Wood, out and over to Dulwich Upper Wood and then up onto the Crystal Palace Park ridge, just through from the parade.

The walk will last approximately 4 hours, with the walk broken up by stops to discuss the history of the area.

Please note that the walk will not be suitable for buggies due to the terrain and kissing gates in Sydenham Hill Wood and Cox’s Walk. It will also cross major roads, so extra care and attention will need to be paid on occasion. Please also be aware this is a long distance walk, so suitable footwear and water is necessary as well as reasonable fitness.

Contact Daniel Greenwood (dgreenwood@wildlondon.org.uk) for more information about the day and if you have any questions about suitability.

Summer at the Horniman

There are some great musical and dance events taking place at the Horniman this August. Here are just a few, but there are many of other events for adults and children throughout the summer.

Capoeira Workshop and Performance - Wednesday, 31 July 2013 from 1:30pm
The Afro-Brazilian artform of Capoeira combines martial arts, dance steps and music first developed by Africans as an act of resistance against their colonial rulers. This performance and simple workshop is suitable for all ages and will encourage you to take part in some simple moves.

Brazilian Ceilidh - Thursday, 1 August 2013 from 1:30pm
The Ceilidh Liberation Front, London’s newest and most radical ceilidh band, will invite everyone to take part in the famous Gaucho Handkerchief Dance, with a load of brightly coloured handkerchiefs provided so everyone can wear one and get into the spirit.

Latin Music Fiesta - Sunday, 1 September 2013 - 12pm - 6pm
A big Latin fiesta in the Horniman Gardens to celebrate the end of the Latin American series of summer events: the programme will include carnival performances from Brazil, Argentinean tango, brass bands from Mexico, Peruvian party vibes and much more!
at Thursday, July 25, 2013 No comments:

The Friends of Devonshire Road Nature Reserve hope that some of you can make it to their Open Day on Sunday. As usual, it will be a nice relaxed afternoon in the nearest thing to countryside South London has to offer. Musician friends very welcome to bring their instruments and join in. 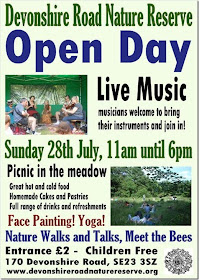 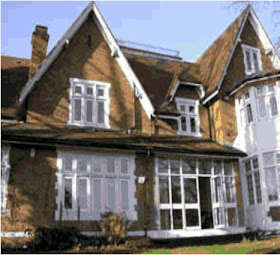 Featherstone Cohousing is situated at the top of Eliot Bank, near the junction of Sydenham Hill and Kirkdale. It is a large Victorian lodge with large grounds which could provide 33 spacious self-contained apartments and houses.


Members of Featherstone Cohousing are holding an Open Day - a chance for you to look round the lodge, the site and the proposed plans for the first cohousing community in South London.

You will be welcome to talk to members of the community about their vision for establishing an ecological community that encourages independent living whilst sharing common spaces, social activities and extending them into the community.
at Friday, July 12, 2013 No comments:

The Edible High Road in Forest Hill got a very positive write up in Grass Roots, the magazine of the Royal Horticultural Society.

The Americans may celebrate their independence on July 4th, but we're celebrating our independent traders. 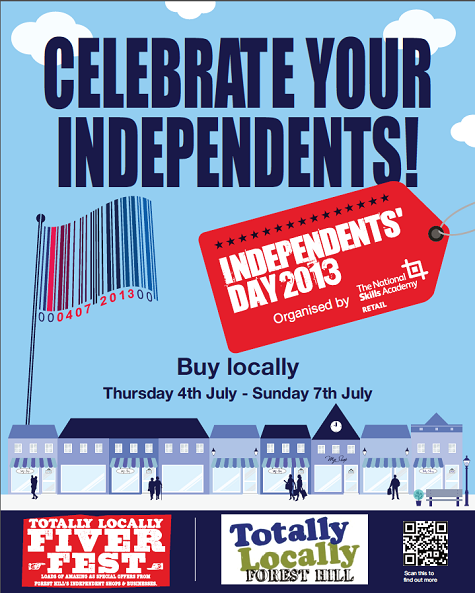 As part of their Totally Locally campaign, the Forest Hill traders are running a Fiver Fest which will see thirty of them running special offers over the weekend. Pop into your favourite shop to get a copy of the flyer which has details of all the offers, or download it now.

We have just heard from LOROL that they are planning some upgrades to Forest Hill's station to cope with the growth in passenger numbers. The works they are proposing include a number of alterations as follows: Now, if only we could have a decent looking building too...
at Tuesday, July 02, 2013 1 comment: 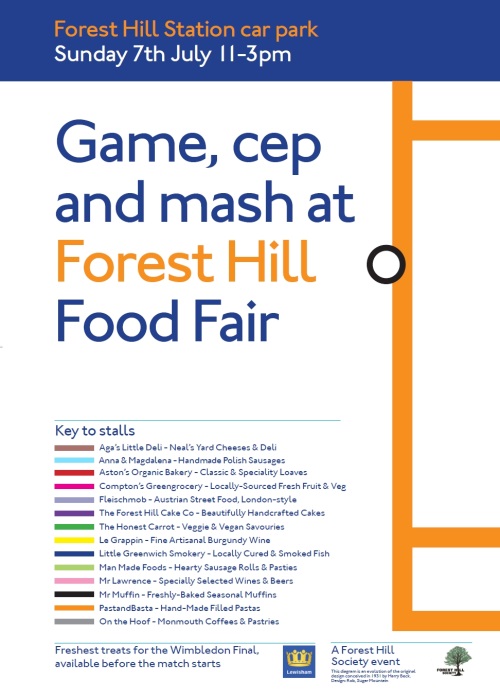 Great food from local producers and retailers.
Wimbledon men's final begins at 2pm, so come early if you are planning to see a British victory in the tennis!
at Monday, July 01, 2013 No comments:
‹
›
Home
View web version