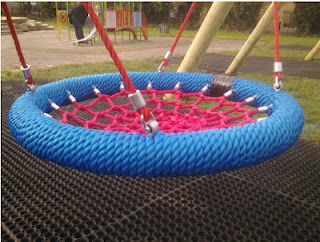 Five swings were recently installed in the Horniman Triangle Play Park as a result of our work; two for toddlers, two regular swings and a crows nest, which is suitable for children with disabilities. These will provide many years of enjoyment for younger generations.

Last June, bids were requested for the Forest Hill ward's Assembly Fund. Various people suggested on local forums that the Horniman Triangle could do with some swings, especially for the younger children.

Following some procedural 'hiccups' we were permitted to make a bid, and therefore visited play parks throughout London and researched suppliers. This was successful and £9,500 was allocated from a combination of the Assembly Fund and Localities Fund. The Council agreed that they would deliver the project, which allowed the monies to go further as we would not have to pay VAT on the equipment.

A big thank you to all those involved in this project.

A further £4,000 has been allocated from the Assembly Fund to provide two all-weather table tennis tables which will be installed near the Cafe in April.
Together, these projects represent an investment of over £13,000 and are the most expensive projects delivered by the society so far.