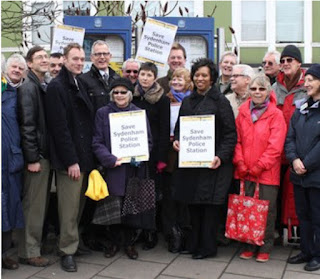 Doubts have been raised by the Safer Neighbourhood Ward Panel about the future of Sydenham Police Station on Dartmouth Road. The Mayor's Office for Policing and Crime (which took over from the MPA in January) are reviewing the entire property portfolio as part of a London-wide review of Police station provision.

The Metropolitan Police (MPS) may want to sell off the building to raise much needed cash and relocate the Forest Hill, Sydenham and Perry Vale Safer Neighbourhood Teams (SNT) and the Rapid Response Team to Catford.

The Station may open only Part time to the public, but is home to our SNT. Relocating the SNT to Catford will result in them spending less time policing the very streets they are supposed to protect and is contrary to the idea of local policing. We feel that this is far from ideal and are calling on the MPS to review the situation.

Borough Commander, Detective Chief Supt Burton, will 'neither confirm nor deny' the rumours and will only say that there is a review of Police Stations happening across London that will look at counter provision across Lewisham.

The Forest Hill and the Sydenham Societies held a protest at the Station on 18 February, which was supported by Mayoral candidate Brian Paddick and are calling on their members to sign the petition available in local shops or online at www.ipetitions.com/petition/save-sydenham-police-station/ and email Detective Chief Superintendent Jeremy Burton: Jeremy.burton@met.police.uk